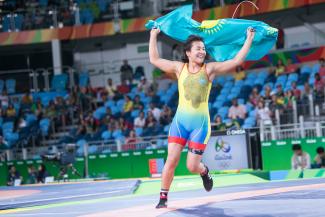 7:36: Sara DOSHO (JPN) became the third Japanese wrestler to come from behind and win the Olympic gold medal. Trailing 2-0 -- after giving up two points off the shot clock -- Dosho secured a takedown with 30 seconds remaining to defeat returning Olympic champion Natalia VOROBIEVA (RUS) 2-2 on criteria at 69kg.

7:25: Jenny FRANSSON (SWE), a 2012 world champion, won her first Olympic medal -- and the first-ever for the Swedish women -- by defeating Dorothy YEATS (CAN) 2-1. Fransson scored her points off the shot clock and by step out.

7:13: World No.9 Elmira SYZDYKOVA (KAZ) took the first bronze medal at 69kg by topping Enas Mostafa Youssef AHMED (EGY) 7-4. Syzdykova used a four-point headlock to grab a 4-2 lead after the opening period. Ahmed came back with an early takedown in the second to make it 4-4. But Syzdykova would score the only points the rest of the way and win by three.

6:32: Kaori ICHO (JPN) won in dramatic fashion in the gold-medal match at 58kg, scoring a takedown off a single leg in the closing seconds on Valeria KOBLOVA ZHOLOBOVA (RUS) to win 3-2 and become the first-ever four-time Olympic wrestling champ. Japan has won the first two gold medals in women's wrestling in Rio.

6:03: Marwa AMRI (TUN) gave Tunisia its first medal in wrestling in any style by capturing a bronze medal at 58kg, beating past world champion Yuliya RATKEVICH (AZE) 6-3. Ratkevich was in control for much of the match, and led 3-0 in the second period. Amri inched closer after a caution and step out. Trailing by one, Malik scored a four-point takedown in the closing 10 seconds to go up 6-3 and secure the victory.

5:26: With seconds left on the clock, Eri TOSAKA (JPN) dug deep and scored a takedown to edge Mariya STADNIK (AZE) 3-2 and claim the Olympic gold medal at 48kg. It was a rematch of last year's World Championship final, also won by Tosaka. Stadnik led 1-0 after the opening period, and added a point from the shot clock to go up 2-0 in the second period. Tosaka inched closer with a point off the shot clock, and then secured a takedown in the closing seconds.

5:12: Elitsa YANKOVA (BUL) took the second bronze medal at 48kg by winning a tight battle over Patricia BERMUDEZ (ARG). Yankova appeared to be cruising to a bronze -- up 7-2 in the second period -- before Burmudez used an arm throw to score four points and get back in the match. Yankova, though, was able to hang on for the one-point victory.

5:04: SUN Yanan (CHN), a 2013 world champion, made quick work of two-time world medalist Zhuldyz ESHIMOVA (KAZ) in the first bronze-medal match at 48kg. In the first minute of the match Sun executed a four-point lift and then was able to get three gut wrenches to end the match quickly.

4:41: In the final repechage match on Wednesday, Sakshi MALIK (IND) rolled to a 12-3 victory over PUREVDORJ Orkhon (MGL) at 58kg. The medal matches are now set.

4:38: Dorothy YEATS (CAN) claimed a hard-fought 3-2 victory over Buse TOSUN (TUR) in repechage at 69kg. Tosun was in deep on a shot late, but was unable to convert to a takedown and Yeats held on for the win.

4:20: Marwa AMRI (TUN) edged two-time world medalist Elif Jale YESILIRMAK (TUR) 3-2 in the repechage at 58kg. Yesilirmak is ranked No. 4 in the world.

4:12: Zhuldyz ESHIMOVA (KAZ) advanced to the bronze-medal match at 48kg with a narrow 3-2 victory over Haley AUGELLO (USA). Eshimova is a two-time world medalist and ranked No.4 in the world. She placed 15th in the London Olympics.

4:09: World No.6 Buse TOSUN (TUR), a past junior world silver medalist, claimed a 7-4 victory over Alina MAKHYNIA (UKR) in repechage at 69kg.

4:02: PUREVDORJ Orkhon (MGL) opened the repechage with a first-period fall over Luisa NIEMESCH (GER) at 58kg. Purevdorj was dominant from start to finish. She built a 7-0 lead before getting the fall. 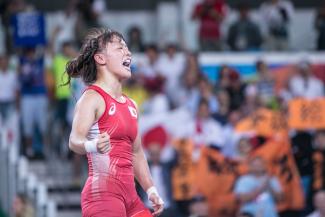 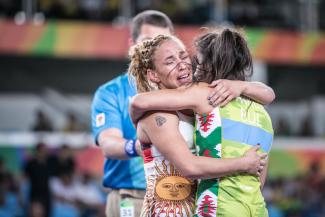