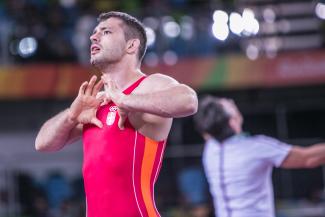 12:31: Yasmany Daniel LUGO CABRERA (CUB), a junior world champion and five-time Pan American champion, claimed a 2-0 victory over Carl Fredrik Stefan SCHOEN (SWE) in the semifinals at 98kg. Lugo will now face Aleksanyan in the finals, and will have a chance to become Cuba's third Olympic gold medalist in Greco-Roman in Rio.

12:26: Two-time world champion Artur ALEKSANYAN (ARM) gave Armenia its second finalist on Tuesday with a 9-0 technical fall over two-time world bronze medalist Cenk ILDEM (TUR). Aleksanyan scored with a step out in the first 20 seconds, and then once in par terre locked up four straight gut wrenches to finish the match.

12:10: Migran ARUTYUNYAN (ARM) advanced to the gold-medal match at 66kg with a 4-1 win over Rasul CHUNAYEV (AZE). The Armenian scored with a four-point body lock late in the first period to go up 4-0. Chunayev would score a point off a passivity call in the second period, but was unable to mount a comeback.

12:05: Davor STEFANEK (SRB) made quick work of Shmagi BOLKVADZE (GEO), earning a fall at 1:25 to advance to the Olympic gold-medal match at 66kg. Stefanek used a chest wrap to score a four-point throw, and then readjusted his grip and secured the fall.

11:57: Carl Fredrik Stefan SCHOEN (SWE) punched his ticket to the semifinals at 98kg with a 9-0 technical fall victory over world champion Elis GURI (BUL). After getting up 2-0, Schoen executed a four-point throw and was awarded two points on a leg foul to go up 8-0, and 9-0 after a failed challenge.

11:43: Artur ALEKSANYAN (ARM) was dominant in the quarterfinals, picking up an 8-0 technical fall over Alin ALEXUC CIURARIU (ROU). He jumped out to an early 4-0 lead after two gut wrenches, added a takedown and fleeing call to secure the technical fall. He joins fellow Armenian Arutyunyan in the semifinals.

11:39: Migran ARUTYUNYAN (ARM) continued his impressive run at 66kg by defeating world No.3 RYU Hansu (KOR), a 2013 world champion. The Armenian scored with a gut wrench in the first period, which was enough to win the match.

11:29:  Rasul CHUNAYEV (AZE), a world champion last year, cruised to the semifinals with a 10-2 technical fall over Tarek Aziz BENAISSA (ALG) at 66kg. Chunayev scored with a headlock and multiple turns to secure the victory.

11:26: Davor STEFANEK (SRB), a 2014 world champion, took out world No.1 Fank STAEBLER (GER), the returning world champion, 6-2 at 66 kg. Stefanek used a four-point throw in the first period that paced him to the four-point victory.

11:24: Past junior world champion Shmagi BOLKVADZE (GEO) moved on to the semifinals at 66kg with a 2-0 win over Olympic champion and world champion Omid Haji NOROOZI (IRI). Bolkvadze scored both of his points off passivity.

11:02: Carl Fredrik Stefan SCHOEN (SWE) topped 2009 world champion Balazs KISS (HUN) 5-3 to move on to the quarterfinals at 98kg. It was the second loss of the round for the Hungarians after Lorincz fell in the round of 16.

10:50: World champion Rasul CHUNAYEV (AZE) edged Olympic champion Islam-Beka ALBIEV (RUS) 3-2 to advance to the quarterfinals at 66kg. Albiev jumped out to a 2-0 lead in the first period after an arm throw. In the second period Chunayev scored a point off passivity, and then was awarded two points from a leg penalty to grab the lead and eventually the victory.

10:32: Migran ARUTYUNYAN (ARM), a European Games silver medalist, scored with a five-point throw on his way to a 9-0 technical fall victory over Adham Ahmed Saleh KAHK (EGY) at 66kg.

10:16: Returning world champion Frank STAEBLER (GER) was pushed in his opening match, but prevailed 3-2 over 2014 world bronze medalist Edgaras VENCKAITIS (LTU) at 66kg. The match was scoreless after four minutes before Staebler received a passivity. Then Staebler scored with a turn before Venckaitis reversed the action and scored two of his own, making the score 3-2 in favor of Staebler, which is how the match would end.

10:06: World champion (70kg) Rasul CHUNAYEV (AZE) came back to defeat Miguel MARTINEZ PALACIO (CUB) 4-2 at 66kg. Martinez Palacio led 2-0 after the opening period, but Chunayev used a headlock to score four points and take the lead, which was enough for the victory.

10:01: We are underway on Day 3 of the Olympic Greco-Roman competition!