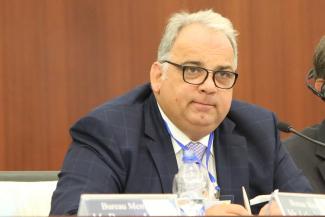 Lalovic marked his election, and by coincidence the eve of the one-year anniversary of wrestling’s re-admission to the Olympic Programme, by presenting member countries at the FILA Congress a comprehensive brand overhaul taking the international federation from “FILA” to “United World Wrestling.”

Lalovic, who was first elected president last year, immediately launched his vision for the organization and its efforts for closer integration into the Olympic Movement.

“Under (IOC President) Thomas Bach and his vision of Agenda 2020 the Olympic Movement could undergo more revisions, more changes," he explained. "We need to part of that change ... We are not guaranteed anything."

Three incumbent members of the World Wrestling Bureau Mikhail MAMIASHVILI (87 votes), Akhroldjan RUZIEV (86) and Tesno TSENOV (71) were re-elected in the first-round of voting, securing more than 50-percent of the congressional vote (63 votes).  Each will serve a six-year term.

The next round of voting welcomed four new full-time members, who only needed a relative majority to be appointed: Pedro GAMA FILHO (BRA), Fouad MESKOUT (MAR), Hideaki TOMIYAMA (JPN) and Karl-Martin DITTMAN (GER).

Tomiyama will serve out the remainder of Lalovic's four-year term and Dittman the final two years of the late Matteo PELLICONE. Both Gama Filho and Meskout have six-year terms.

Pellicone's widow, Marina, was also elected to a six-year term. Her position was added to help wrestling meet its mandate for having three female members for the World Wrestling Bureau.

With his a new brand in place, his presidency secured for six years and on the eve of The World Championship, Lalovic continued to look forward.

"I promise you that the steps all of us are taking now will be huge.  They will propel us into a new age in our sport,” remarked Lalovic. "We will look different on the mats, in our competitive dress and in our brand.  We will take our message to sponsors and media that wrestling is worth investing in.”

“We will become good partners in telling the story of wrestling."