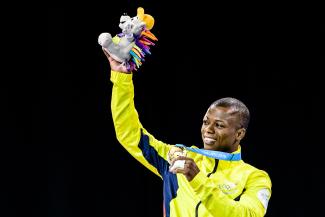 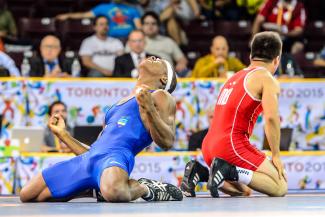 Montaño converted an early takedown into a lift and turn for a 6-0 lead and then slammed the door on Soto with a bodylock takedown to the secure the gold medal.

It was the first gold medal for Ecuador in the classic style and first wrestling gold medal since 1971 when Sergio GONZALEZ (ECU) won the 48kg crown in freestyle in Cali, Colombia. 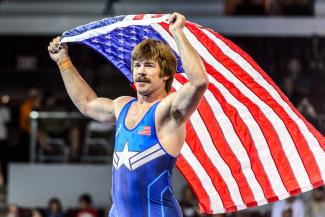 Meanwhile, U.S. wrestlers won two out of three in the gold medal finals as Andrew BISEK (75kg) and Jon ANDERSON (85kg) both dialed up technical falls in the finals.

Bisek converted in par terre with a chest-high gut wrench and lift to back-arching throw for a quick win over Alvis ALMENDRA (PAN), who takes home Panama’s first wrestling medal from the Games since 1991 despite the loss. Bisek outscored his opponents 25-0. 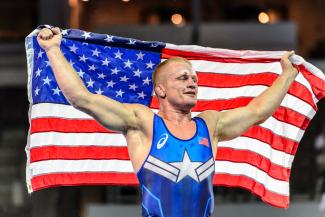 Venezuela stands second in the medals table with one gold and one silver medal. Anderson won last year’s Pan Am Championships in Mexico City at 80kg.

Wuileixis RIVAS (VEN), the 2014 Pan Am champion at 71kg, gave Venezuela a wrestling gold medal for a second straight Games with a 13-1 technical fall win over Bryce SADDORIS (USA).

At 59kg, Cristobal TORRES (CHI) scored with a late go-behind takedown to sew up a 3-0 win over Dylan WILLIAMS (CAN) for one bronze medal.

Spenser MANGO (USA), the Pan American runner-up in April, flipped Jansel RAMIREZ (DOM) with a reverse waistlock and short lift in the first period and held on for a 6-3 win and the other bronze medal.

At 66kg, Miguel MARTINEZ (CUB), the gold medalist at the Pan Am Championships, scored with a go-behind takedown and bodylock before Jair Alexis CUERO (COL) defaulted. Mario MOLINA (PER) shook off an early four-point throw and forced a disqualification on Jefrin MEJIA (HON) in the second period for the second bronze.

Despite a disastrous opening session for Cuba, Martinez and Alan VERA (85kg) were able to secure a pair of bronze medals for the traditional Pan Am powerhouse.

Pan American runner-up Juan ESCOBAR (MEX) was the only wrestler to secure a fall in the medal matches Wednesday, when he stepped over an arm throw attempt by Luis AVENDANO (VEN) and pressed for the fall.

Burroughs Repeats, Rey Doubles Up on 2015 Titles in Pan Am Games 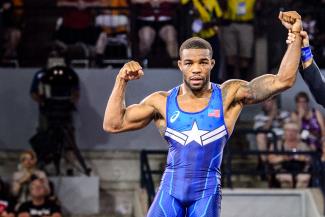 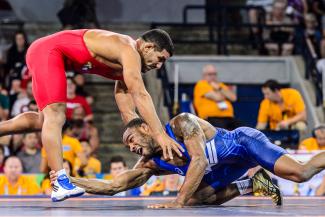 TORONTO, Canada (July 18) – Defending champion Jordan BURROUGHS (USA) repeated as Pan American Games gold medalist on Saturday as the United States rolled to three gold medals and a silver on the final day of wrestling competition at the Toronto 2015 Games.

World and Olympic Games champion Burroughs cruised to three wins by technical fall, including a 13-3 triumph in the quarterfinals over Livan LOPEZ (CUB), for his second Pan American Games gold medal after winning at the Guadalajara 2011 Games.

In the 74kg final, Burroughs softened up South American Games champion Yoan BLANCO (ECU) with a series of force-outs in the first period, then wrapped up the technical fall with a single-leg attack and a pair of cross-ankle turns.

Lopez, the gold medalist at 66kg in Guadalajara, rebounded for a bronze medal after his loss to Burroughs.

Former junior world champ Kyle SNYDER (USA) made a big splash with his third technical fall of the day, 10-0, over Arjun GILL (CAN) in the 97kg final for his first major senior title. 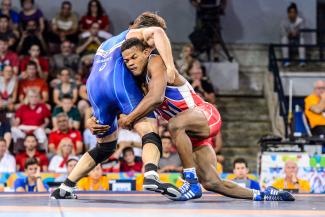 Jake HERBERT (USA), the Games’ defending middleweight champion, came out on the short end of a wide-open final at 86kg, falling 12-7 to world silver medalist Reineris SALAS (CUB) and his wicked double-leg attack.

With three gold medals on the final day of wrestling, the United States completed the freestyle competition with four of the six gold medals on offer along with a pair of silver medals for 58 points.

Cuba, meanwhile, grabbed the other two gold medals as well as a silver and two more bronze medals, to finish second in freestyle with 49 points. Canada was even more distant in third place with 40 points. 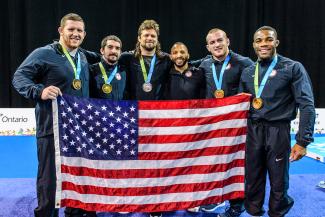 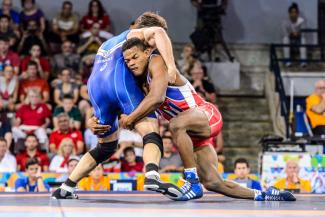 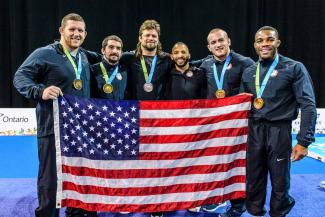