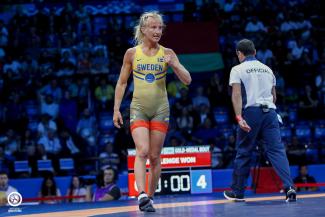 One was pushed to limits, while the other did not break a sweat.

Mattsson, a six-time world medalist and Olympic bronze medalist, held on to defeat Yulia KHAVALDZHY (UKR) 6-4 in the gold-medal match at 53kg.

The 29-year-old Swedish wrestler raced out to a 6-0 lead at the break after picking up three takedowns in the first period. Khavaldzhy got on the scoreboard with a takedown early in the second period. Trailing 6-2 late the in the match, Khavaldzhy fired off a shot and scored a takedown and put Mattsson in trouble. She was initially awarded four points for the exchange, which would have given her a 6-6 win on criteria. But Mattsson challenged the call and it was overturned. Two points were taken off the scoreboard, giving Mattsson the victory.

Sadulaev, a 2016 Olympic champion and three-time world champion, added second European Games gold medal to his list of accomplishments after getting an injury default against Nurmagomed GADZHIYEV (AZE) in the gold-medal match at 97kg. Gadzhiyev walked out on to the mat with a heavily bandaged leg and Sadulaev was given the injury default victory. Sadualev's European Games gold medal in 2015 game at 86kg.

In a battle of world champions, Haji ALIYEV (AZE) dominated Olympic champion Vladimer KHINCHEGASHVILI (GEO) 10-2 to claim the gold medal at 65kg. Aliyev, a three-time world champion and three-time European champion, used a takedown and exposure to grab an early 4-0 lead. He added an additional point after a failed challenge to go up 5-0 at the break. Khinchegashvili inched closer with two one-point scores in the second period, but Aliyev then turned it up. He countered an attacked from the 28-year-old Georgian for a takedown. He added a step out and another takedown to win by eight.

Anastasija GRIGORJEVA (LAT), a two-time world bronze medalist, defeated two-time European champion Anastasiia BRATCHIKOVA (RUS) 5-3 to win the gold medal at 68kg. It's her second European Games medal after winning a bronze medal in 2015. Grigorjeva was in control most of the match. She scored her first point off a passivity and then added a takedown to lead 3-0 after the opening period. She built her lead to 5-0 in the second period after a takedown. Bratchikova put herself back in the match by scoring a step out followed up by takedown in the final 30 seconds to make the score 5-3. But Grigorjeva would hang on for the win.