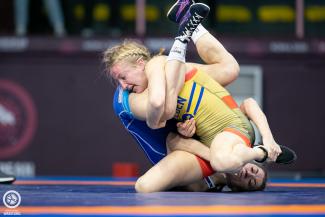 Mattsson put on a stellar performance in the 53kg finals against fellow world champion Vanesa KALADZINSKAYA (BLR) and claimed her second title of the year.

The Rio Olympic bronze medalist scored four single-leg takedowns and an exposure and ended bout 10-0 with 90 seconds left on the clock. In her two ’21 competitions, she’s captured a pair of golds, but done so in convincing fashion. She's now defeated a world champion in back-to-back tournament finals. In addition to today’s win over two-time world champion Kaladzinskaya, Mattsson also defeated ’19 world champion Jacarra WINCHESTER (USA) in the Henri Deglane finals.

Koliadenko continued her impressive run to the 62kg gold medal with a 15-4 throttling of Anastasija GRIGORJEVA (LAT). She scored three first-period takedowns before making her lone mistake of the competition. The Ukrainian gave up a four-point outside trip, but squirmed off of her back for the reversal and transitioned into a gut wrench. She ended the first period with a five-point lead, 9-4.

In the closing frame, Koliadenko returned the four-point favor. She made the mid-match adjustment and halted a second outside trip attempt from her Latvian opponent and scored four points of her own. Koliadenko closed out the match with a gut wrench and earned the 15-4 technical superiority victory.

There were three forfeits in the finals but the remaining gold-medal match that was contested came at 76kg. In a pretty dull match, London Olympic champ Natalia VOROBEVA (RUS) earned two points from an inactivity point and a stepout and defeated Vasilisa MARZALIUK (BLR), 2-0.

Miglena SELISHKA (BUL) and Evelina NIKOLOVA (BUL) claimed gold for Bulgaria at 50kg and 57kg, respectively, on Saturday night. Both of their wins came via injury defaults.

Koumba LARROQUE (FRA) was the final champion that was crowned on Saturday night. Her 68kg finals opponent Khanum VELIEVA (RUS) injury defaulted out of the gold-medal match.

Sunday night’s Greco-Roman medal matches kick-off at 18:00 (local time) and can be followed live on www.uww.org. 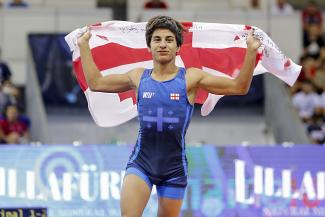 BUDAPEST, Hungary (July 25) --- Just like the freestyle and women's wrestling in Budapest, a new nation claimed the Greco-Roman team title for the first time. Georgia, which claimed two bronze medals on the final day of the cadet World Championships, won their first-ever team title in the history of the tournament.

The country did not have any finalists Sunday but it finished with two gold, a silver and three bronze medals to register with 141 points, the most among all the participants.

India had claimed their first-ever freestyle team title on Wednesday while USA won the women's team title on Friday, the first for them as well in the history of the tournament. 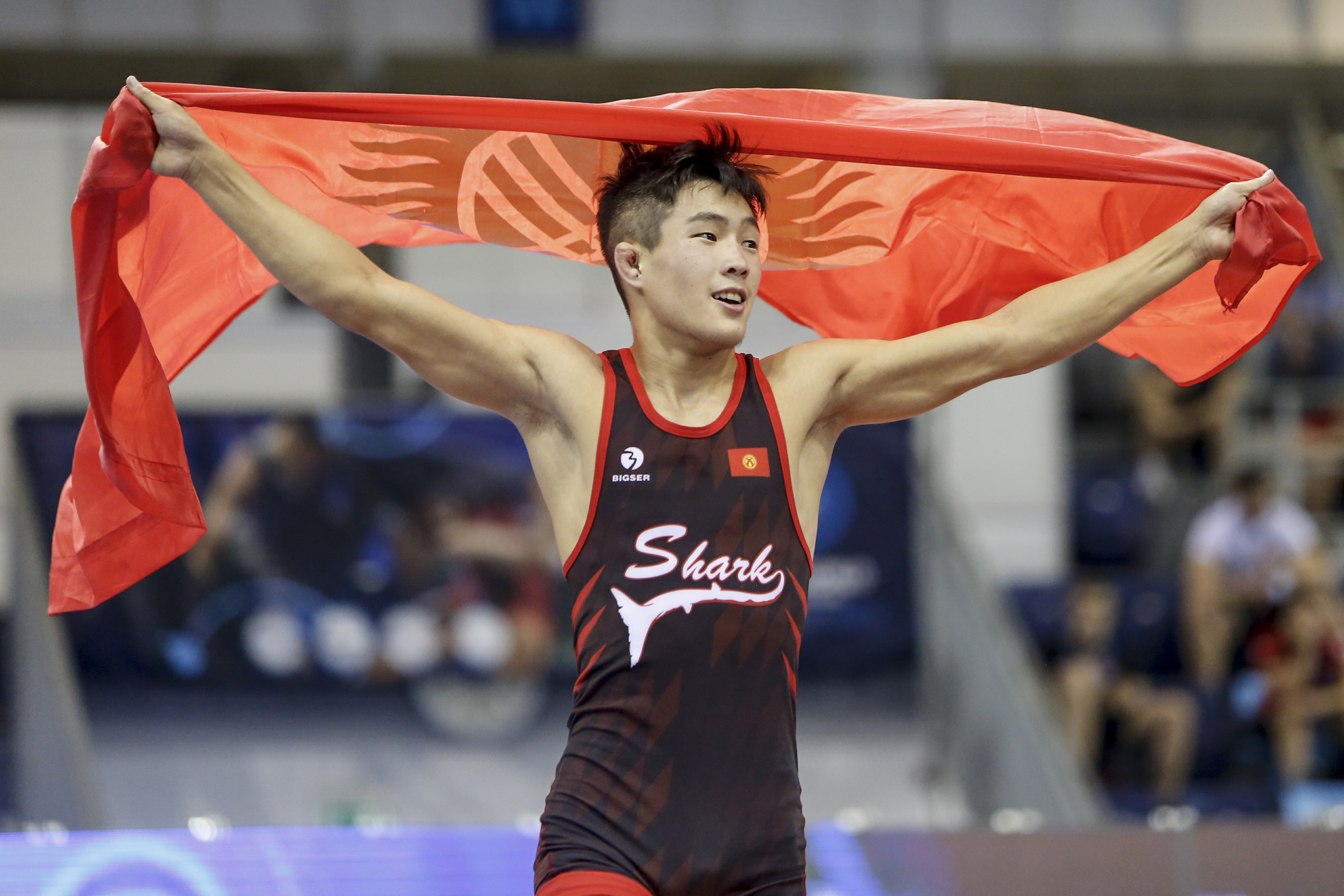 Suiorkulov denied Yurii TOVT (UKR) the gold medal at 51kg as he won 3-1. This is the first time in five years that a Kyrgyzstan wrestler won the cadet Worlds. Akzhol MAKHMUDOV (KGZ) had achieved this feat in 2016, becoming the second only for the country.

"I am so glad to become the world champion," Suiorkulov said. "I wasn't worried during they day. I thought I was going to win the match."

"Since my World Championship in 2019, I was preparing well," he said. "We had some tough days. During the COVID, I kept training at home."

Asked how he took up the sport of wrestling, he said that his friends made him do wrestling but he has emerged to be the most successful one. "My friends made me start my wrestling training as we were going to the gym together," he said. "Thanks you, my friends! None of them achieve such results in wrestling though." 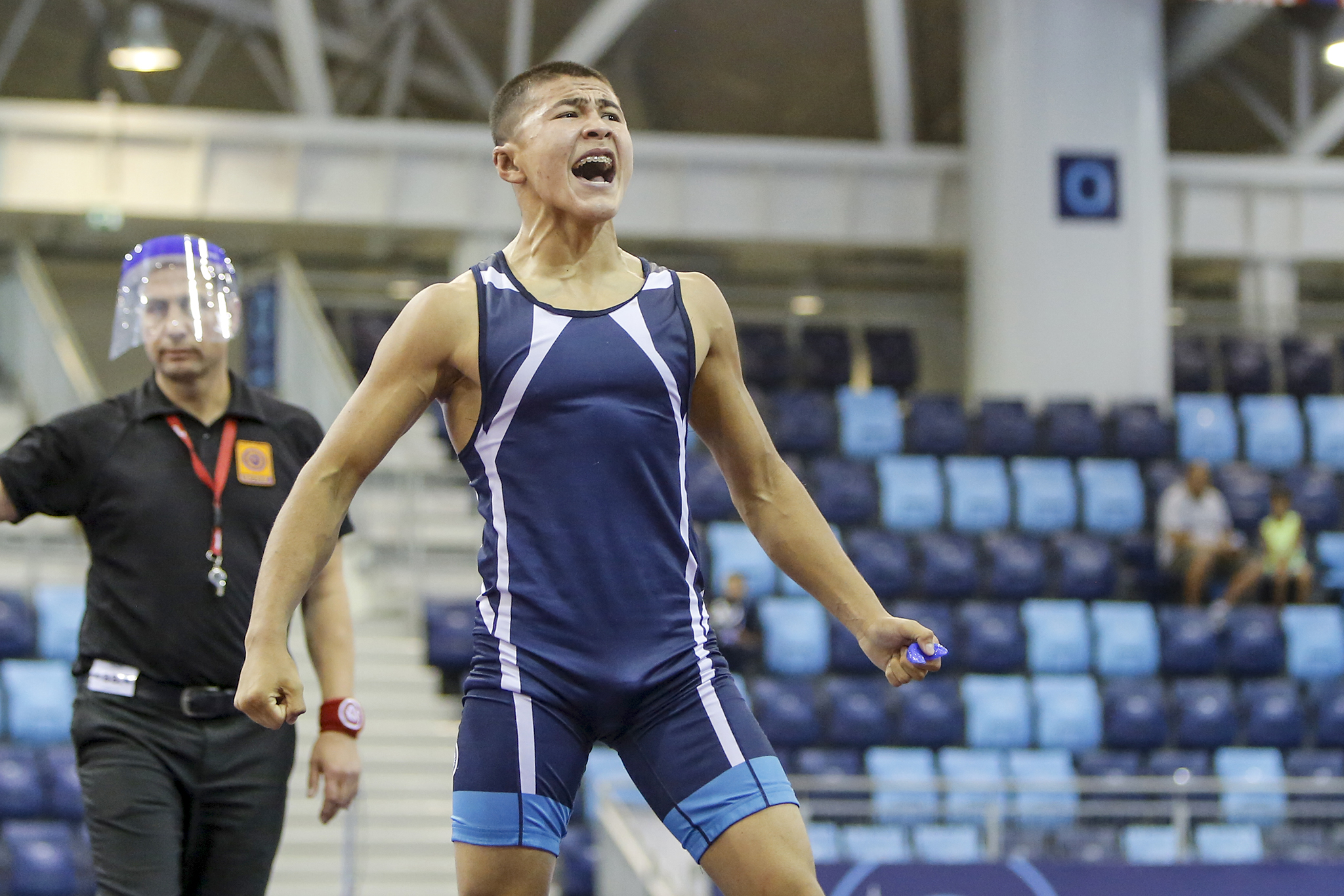 At 60kg, Beishekeev overcame Seyyedmostafa REZAEI DARYAKENARI (IRI) 4-1 in the final with ease. While it was the Iranian who led at the break 1-0 but Beishekeev scored four points in the second period for the win.

Iran challenged the call but the judges upheld the referee's decision. The added point for lost challenge made the score 4-1 for Beishekeev's score which remained till the clock expired.

Another Iran wrestler was denied the gold medal as Alexandru SOLOVEI (MDA) defeated Alireza ABDEVALI (IRI) 2-1 at the 71kg final. Solovei was leading on criteria 1-1 but was struggling to match the pace of Abdevali in the final few seconds.

Abdevali tried to score via stepout in the final three seconds but was not awarded by the referee. Iran coaches challenged the call, claiming there was a clear stepout but the judge withheld the referee's call after the replay, giving the Moldovan wrestler the win. 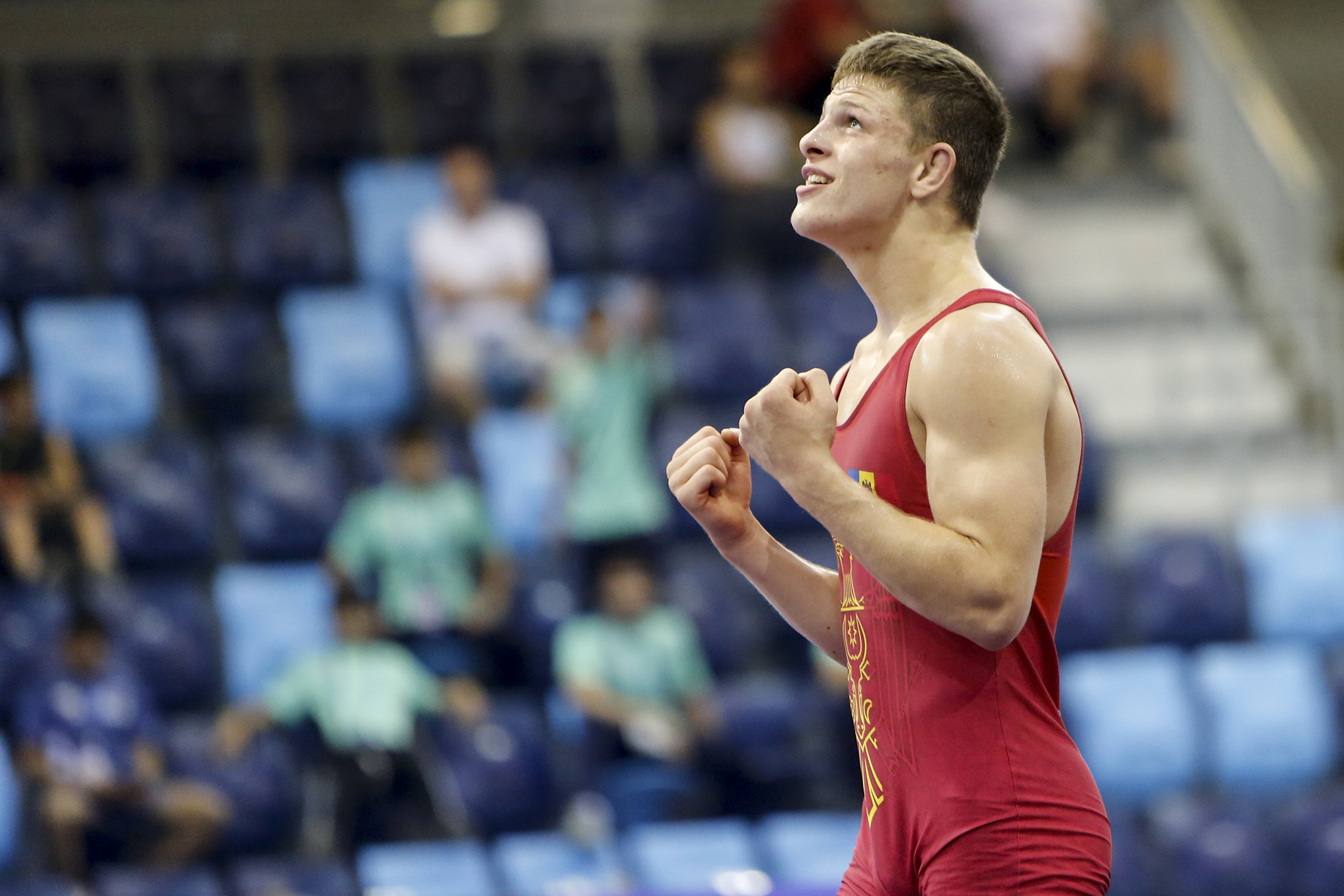 "Last time I lost to an Iran wrestler, but this time I was confident," Solovei said referring to his loss to Hojat REZAEI (IRI) at the 2019 cadet Worlds. "It's important to wrestle till the last second. Today I got the revenge. I am very happy to get the medal. I hope next year I'll get only the medals like this one."

At 45kg, Ukraine added another gold after the one Saturday with cadet European silver medalist Nikita DEMENTIEV (UKR) denying Ozodbek KHALIMBOEV (UZB) at the 45kg weight. He snatched a close 2-1 win after scored a step out in the second period.

He was awarded passivity and led 1-0 but he failed to take advantage of the par terre position. In the seconds period, he scored a stepout with a minute and 18 seconds remaining to extend the lead to 2-0. Khalimboev was awarded point for Dementiev passivity with 34 seconds remaining. It was his chance to reverse the match but he failed to score any points on the par terre position. 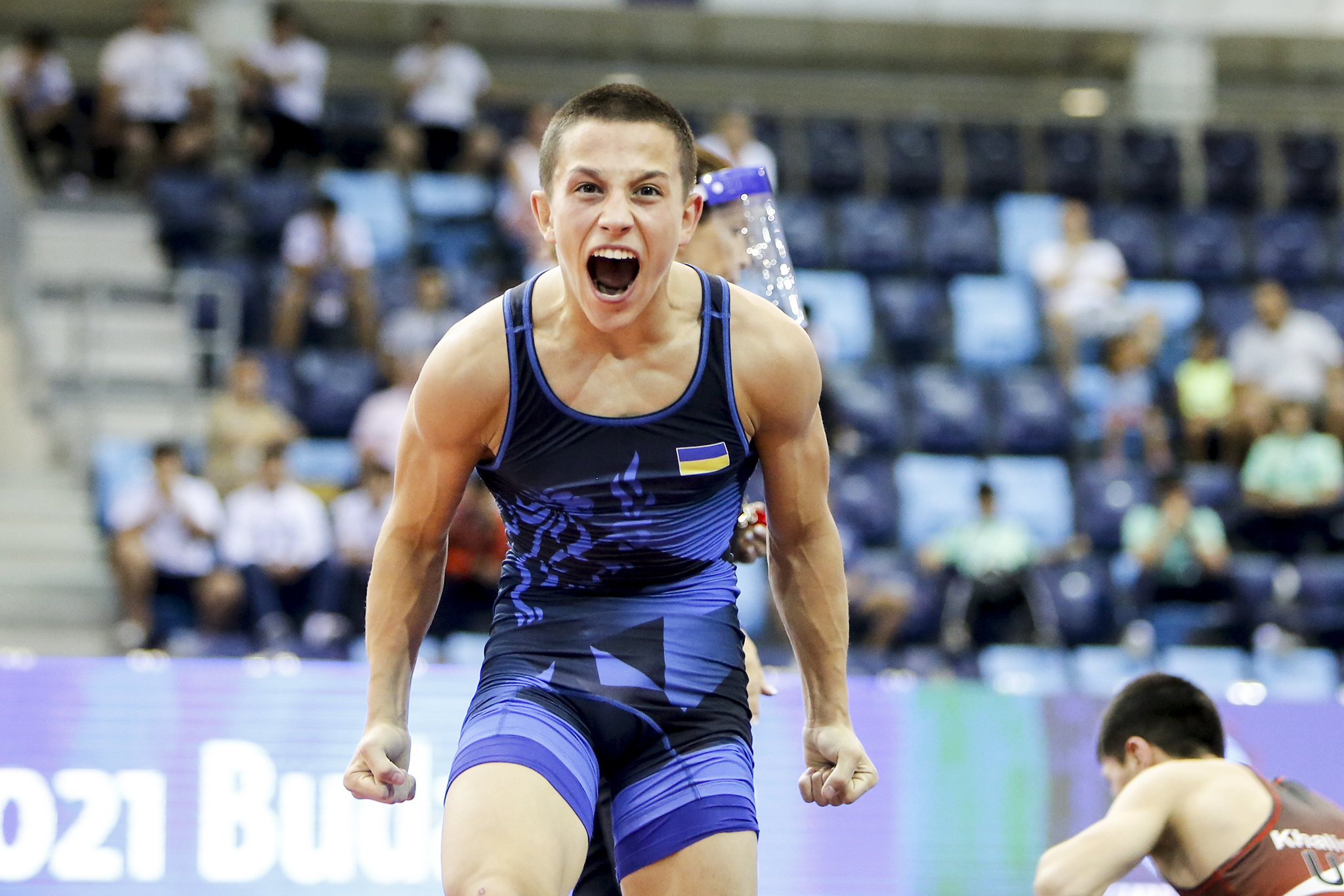 "I have been waiting for that belt and for this medal for so long." Dementiev said. "After the unsuccessful European Championships where I got the silver medal, I really wanted to become a champion."

Dementiev won the gold medal for Ukraine and said that while preparing for the final, he was trying to remain positive.

"I was thinking about how to make my parents and my coaches happy," he said. "I wanted to prove myself that I can win. My final match was a bit tough, but we made it. When I was in school, there were wrestling classes and I just decided to give it a try. Little be little I started training and now it's been 6 years."

It could have been two for them and the team title but 2021 cadet European champion Vladyslav LUB (UKR) suffered a shock defeat to cadet Euros bronze medalist Abubakar KHASLAKHANAU (BLR). 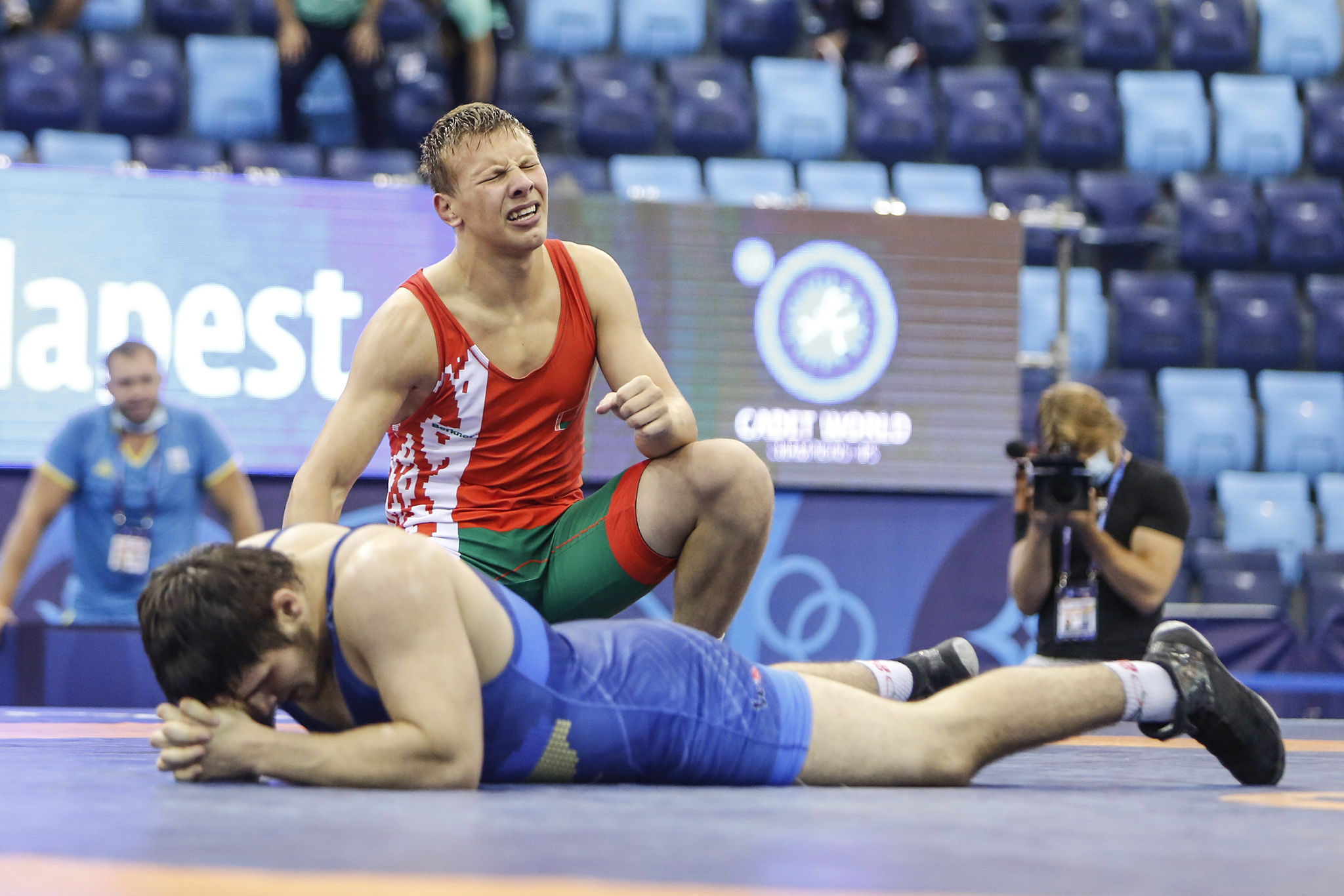 Lub's strategy for the 92kg final backfired when he was awarded the passivity in the first period. He thought he would be able to score from the par terre position but Khaslakhanau's defense proved to be too much.

On the other hand, the Belarusian scored a throw for two points from the par terre in the second period to avenge his loss from the cadet European tournament just a couple of months back.

"We have been working so hard to get this medal," Khaslakhanau, who began wrestling when he was in fifth grade, said. "But it's definitely worth it. I can't even describe my emotions, but believe me it's worth it."

In his preparation for the final, the Belarussian took some motivation from the ongoing Olympics in Tokyo to keep his mind off the match.

"I tried not to think about the match," he said. "We we walking and laughing together with the coach, we were watching the Olympics on TV. Then I just came here, and did what I was supposed to do."

Next week, he will cheering for the Belarus wrestling team as wrestling at Tokyo Olympics, which are already underway, begins from August 1.