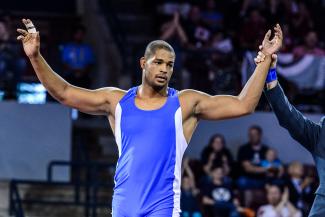 Perez Mora advanced to the final with a technical fall triumph over defending Pan Am champ Kevin MEJIA CASTILLO (HON) in the semifinals. 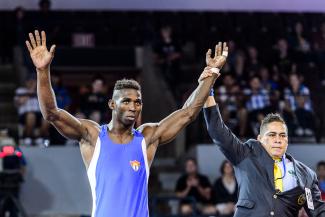 Despite his lack of international experience, Pino Hinds won at the Granma Cup in Havana last February and breezed into the super heavyweight finals in Frisco with three technical falls – all wrapped up in the first period.

Meanwhile, the host Americans advanced four wrestlers to the finals with an eye on winning their third team title of the championships after cruising to wins in women’s wrestling and freestyle.

The U.S. squad has the advantage of having entries in all eight weight categories, while Cuba has only entered wrestlers in the six weights to be contested at the Rio 2016 Olympic Games this summer.

U.S. wrestlers Patrick SMITH (71kg) and Cheney HAIGHT (80kg) have advanced to the finals at the two non-Olympic weight categories, giving the hosts an 18-point advantage even before the first whistle is blown in the final session Sunday evening.

For complete results, go to unitedworldwrestling.org/event/pan-american-championship-senior-2 and click on the button for “Arena” and then “Results”.