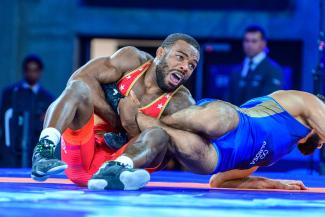 ISTANBUL, Turkey (February 27) -- The final day of the Yasar Dogu, Vehbi Emre & Hamit Kaplan Ranking Series is here. After the Greco-Roman and Women's Freestyle, the men's freestyle will round off the tournament.

1814: Ravi KUMAR (IND) works Mohammad YAKHKESHI (IRI) so much that he gives up a pin. The Tokyo silver medalist is moving on into the final at 61kg

1755: James GREEN (USA) waited for the final 30 seconds to score a takedown and take out Viktor RASSADIN (RWF) in the 70kg semifinal

1715: Jordan BURROUGHS (USA) was put on the activity clock in the final minute with a score of 1-1 against Ali Bakhtiar SAVADKOUHI (IRI). But a clear singlet grab from Savadkouhi gives the point to Burroughs and the win at 2-1

1625: Bekzod ABDURAKHAMANOV (UZB), debuting at 86kg, began with a win and is now wrestling in the quarterfinals against Tarzan MAISURADZE (GEO). It was 2-1 for the Uzbek wrestler before he scores a takedown on the edge to lead 4-1. A stepout to extend the lead. It's 7-1. Another stepout and he wins 8-1.

1610: Suleyman ATLI (TUR) had it covered with a 5-3 lead and needed to defend 10 seconds. But Mohammad Esmaeil YAKHKESHI (IRI) throws him for four points with 5 seconds remaining and secures the win

1600: The semifinals for the 92kg weight class are set

1545: Viktor RASSDIN (RWF) takes out Ernazar AKMATALIEV (KGZ). After building an 8-0 lead, Rassadin defended all the attacks and hangs on for a 12-7 win.

1445: Are you excited for these 65kg quarterfinals?

1345: The crowd here has is on its feet. Ahmet TAS (TUR) gets two body locks to four points and beats Ramiz GAMZATOV (RWF) 11-0. Just a stunning show of power

1330: Jordan BURROUGHS (USA) with some more double-leg attacks and Zhiger ZAKIROV (KAZ) has no answers to them. The USA wrestler wins 10-0

1315: Ernazar AKMATALIEV (KGZ) has a tendency to give up early points but then rallies to come back in those bouts. In a similar fashion, he beats Anthony ASHNAULT (USA) 10-3

1300: Jordan OLIVER (USA) was in the lead but Aliakbar FAZLIKHALILI (IRI) scored two takedowns and moves on with a 4-2 win at 70kg

1130: Russian champion Ramiz GAMZATOV (RWF) got a tough challenge from Daniel DESHAZER (USA) but comes out on top 5-1. Great technical wrestling from him

1115: Jordan BURROUGHS (USA) got some double-legs, some stepouts and he a win at 79kg. He moves on to the quarterfinals.

1105: Ernazar AKMATALIEV (KGZ) has nerves of steel. He was trailing 3-4 with 10 seconds remaining and pulls out a huge takedown at the edge to win 5-3 at 70kg

1050: Cadet world champion Umidjon JALOLOV (UZB) with a good win over Ali RAHIMZADE (AZE) 10-0. It will be interesting how far Jalolov can go in the tournament at 65kg

1040: Welcome to the final day of the #WrestleIstanbul event. Kicking off proceeding on Mat B is the world champion Zagir Shakhiev (RWF) and Adil OSPANOV (KAZ). Shakhiev with a quick leg lace and leads 6-0. Ospanov with a two and two to make it 4-8. But Shakhiev has bounced back nicely to win 15-5