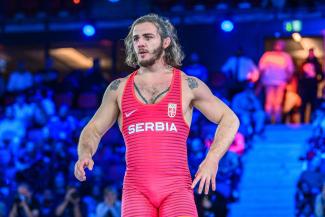 14:30: Mahmud BAKHSHILLOEV (UZB) and Furkan YILDIZ (TUR) were in a cut-throat battle in the 67kg semifinals. Bakhshilloev leads 3-0 but then Yildiz leads 3-3 on criteria. The Uzbek doesn't give up and wins 4-3

1415: Felix BALDAUF (NOR) and Rustam ASSAKALOV (UZB) are on Mat A for their 97kg semifinal. Assakalov is up 6-0 in quick time and then is awarded 4 for a body throw. Challenge from Baldauf and he wins since it was a trip from Assakalov. It ultimately ends 7-1 for Assakalov

14:05: Is that the upset of the tournament? Beka KANDELAKI (AZE) stuns local favourite and world champion Riza KAYAALP (TUR) with a pin in the quarterfinals.

13:55: Norway has two in the semifinals. Morten THORESEN (NOR) makes his way to the 67kg last four with a 5-3 win over Meiirzhan SHERMAKHANBET (KAZ).

13:50: Felix BALDAUF (NOR) and Murat LOKIAYEV (AZE) on Mat C. Baldauf with a 3-0 lead in the first period. He scores a stepout to start the second period. He keeps his calm to claim a 5-0 win

13:42: Ekrem OZTURK (TUR) had built a 5-0 lead over Eldaniz AZIZLI (AZE) in their 60kg quarterfinal but Azizli calls for a medical timeout. The medical staff rules out future competition for Azizli. Ozturk moves into the semifinals

13:33: We're going to roll right into the semifinals. They'll start first on Mat A. Mats B and C will follow once their quarterfinals conclude.

13::29: In champion-like fashion, Basar picked up the match-deciding takedown in the second period. He'll square off against fellow world champion Datunashvili for a spot in the finals.

13:22: Kulynycz has two-time world champion Basar in trouble. He spun behind the Turkish wrestler and picked up the first takedown of the bout. His opponent felt that he stepped out, but after further review, Kulynycz was awarded a point for the lost challenge. He leads, 3-1, after the opening frame.

12:49: Reigning world champ Datunashvili picked up his second victory of the day -- a 5-1 win over  Mehmetali KUCUKOSMAN (TUR) -- and pushed himself into the 87kg semifinals. He'll take on the winner of Arkadiusz KULYNYCZ (POL) and Metehan BASAR (TUR) (Mat C / Bout 78) for a finals berth.

Can you name a more important electric ⚡️ duo? #WrestleIstanbul

12:44: Kayaalp, the four-time world champion, picked up a 4-1 win over Savenko in his opening round match. He'll wrestle Beka KANDELAKI (AZE) for a spot in the 130kg finals.

On the other side of the 130kg bracket, Osman YILDIRIM (TUR) and Alimkhan SYZDYKOV (KAZ) will square off the second finals spot.

12:30: Riza KAYAALP (TUR) comes on the mat with loud cheers from the crowd. He is taking on Anton SAVENKO (KAZ) at 130kg

12:00: Rustam ASSAKALOV (UZB) is going strong at 97kg. He beats Abdul CEBICEBI (TUR) 9-1 in the pre-quarterfinals. He gets in a front headlock position before getting two guts to finish the bout

11:30: World champion at 87kg is making his way to Mat B for his first bout of the day. Early passivity call against Datunashvili and he is down 0-1 at the break. He levels it as he gets the activity point. 8 straight points and he wins 9-1

11:00: World champion Victor CIOBANU (MDA) gets going with a win as well. He has little trouble going past Abdurahman ALTAN (TUR).

10:30: We are beginning with the matches here in Istanbul. The Greco-Roman wrestlers are ready and warmed-up