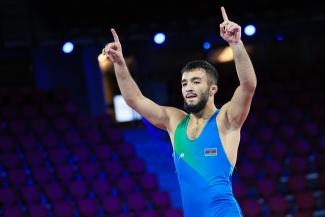 BELGRADE, Serbia (November 6) -- The penultimate day of the U23 World Championships is here. The final five weigh classes of freestyle will be in action at the Belexpocentar. Later in the day, we will have the five freestyle finals.

1540: Artur CHEBODAEV (RUS) never looked in trouble as he makes his way to the semifinals after a 7-0 win over Christopher CANNON (USA). He will face Narankhuu NARMANDAKH (MGL) in the semins. Narmandakh defeated Arman ELOYAN (FRA) in the semifinal.

1440: Sajjad GHOLAMI (IRI) with another win for Iran. The 86kg wrestler in now into the semifinal after beating Mher MARKOSYAN (ARM) 5-0 and on Mat A, Zagid KARIMOV has two cautions against him but he wins 7-3 against Sandeep Singh MANN (IND).

1415: Mohmmadsadegh FIROUZPOURBANDPEI (IRI) keeps the winning ways for Iran. He beats Praveen MALIK (IND) 12-2. On Mat B, Arsen HARATYUNYAN (ARM) moves on to the quarterfinals with a 6-0 win

1345: Valiev scored a stepout, added a takedown and in the same action he gets a roll to lead 5-0. Bayramov cuts it to 5-2 with a takedown and then tries to score to pushouts but Valiev is quick to not go out in standing and refs call it neutral. Bayramov fails to get the takedown. Valiev will move into the quarterfinals after the 8-3 win

1330: Turan BAYRAMOV (AZE) and Cherman VALIEV (RUS) are making their way for their 1/8 final on Mat C

1240: Arsen HARUTYUNYAN (ARM) starts with a controlled win over Gamzatgadzhi KHALIDOV (HUN). He was looking for the pin but the time ran out in the first period. He comes back to win 11-1

1230: Christopher CANNON bringing the fire on Mat A! He fends off attacks from Suraj KOKATE (IND) and then adds leg lace and a carry for four to win 10-0

1200: Cherman VALIEV (RUS), one of the favorites to win here, starts with an easy 11-0 win over  Tino RETTINGER (GER) and moves to the 1/8th against Bayramov

1140: Turan BAYRAMOV (AZE) is wrestling at his sixth international tournament this year. He takes his time but scores an easy 6-0 win over Vadym KURYLENKO (UKR)

1130: Do we have a new Geno PETRIASHVILI? Solomon MANASHVILI (GEO) uses his express speed to win his opening bout Yurii IDZINSKYI (UKR)

1030: Welcome to yet another day of wrestling action at the U23 World Championships. Freestyle action continues as we have five more weight classes going on the mat. Big session coming up