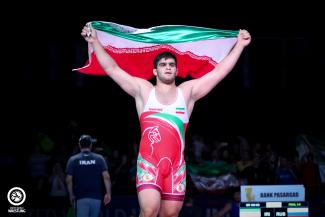 BELGRADE, Serbia (November 1) -- The U23 World Championships get underway in Belgrade, Serbia with Greco-Roman action. Five weight classes -- 55kg, 63kg, 77kg, 87kg, 130kg -- will be in action on day one of the competitions at the Belexpocentar.

1430: That will do for the morning session of the first day at the U23 World Championships. Iran puts four in the semifinals while Russia has three. We will be back for the semifinals at 1800 local time

1420: Amin KAVIYANINEJAD (IRI) comes from behind to score a 10-5 win over Erkan ERGEN at 77kg and secures a place in the semifinals

1330: Abuladze is called passive and Tibilov gets the lift. He is unable to score and it's the Georgian who lands on top and scores 2. Russia challenges the call. It stands. A point for the lost challenge as well. Abuladze leads 6-1. Pushout adds one more. He hangs on for a 7-3 win

1320: We are beginning with the quarterfinals here in Belgrade. A big bout on Mat A as Leri ABULADZE (GEO) takes on Georgii TIBILOV (RUS). The Russian is called passive and Abuladze gets a roll to lead 3-0 at the break

1300: A battle worthy of a final but we saw it in the 1/8 finals. Amin MIRZAZADEH (IRI) and Mikhail LAPTAEV (RUS) in an intense battle but the Iranian comes out on top 2-1. He moves on into the quarterfinals.

1230: Poya DAD MARZ (IRI) was called passive twice but he defends the par terre position against Nihad GULUZADE (AZE) and won 1-1 at 55kg

1210: No stopping Aleksandr KOMAROV (RUS)! He defeats 2020 Asian champion Sunil KUMAR (IND) 6-2 to move into the quarterfinals at 87kg

1145: World silver medalist Leri ABULADZE (GEO) doesn't take much time to get his first win over Assaukhat MUKHAMADIYEV (KAZ). He wins 5-1 at 63kg.

1100: Tokyo Olympian and Asian champion Amin MIRZAZADEH (IRI) has put the right steps to start his tournament. He wins 6-1 against Nikola MILATOVIC (NOR)

1050: Another great start for Russia as Mikhail LAPTEV (RUS) makes it look easy against Nikolaos NTOUNIAS (GRE) with a 9-1 win.

1030: Welcome to the U23 World Championships! A day after the UWW Congress where Nenad LALOVIC was re-elected as the UWW President, the limelight shifts to wrestling. Greco-Roman will get us going.