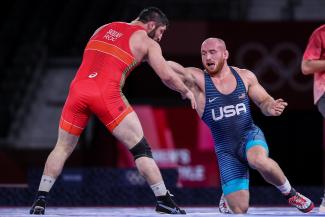 1240: We are beginning with the quarterfinals. We will begin with WW 55kg followed by WW 62kg. FS 70kg will be before the 97kg quarterfinals

1200: Kyle SNYDER (USA) and Abdulrashid SADULAEV (RWF) both beginning their campaigns with wins. They are on the opposite sides of the brackets and can only meet in the finals

1140: Another strong attach from Ozaki but this time Tynybekova manages to defend that. But she still trails 0-4 with two minutes to go. Now Tynybekova on the attack and she cuts the lead to 2-4 with a takedown. Now another takedown to lead 4-4. She gets the gut but judges call it out of bounds. Long shot from Ozaki, she gets the leg but isn't able to finish. Tynybekova manages to get a takedown on the edge 6-4 and the time expires. What a match from the young star but Tynybekova using all her experience there to win

1135: Ozaki with a double leg takedown against Tynybekova and adds another to lead 4-0 early in the bout. Ozaki unfazed by the defending world champion

1130: Sakurai wins 10-4 and next on Mat B is Tokyo silver medalist Aisuluu TYNYBEKOVA (KGZ) and in blue is cadet world champion Nonoka OZAKI (JPN). Meanwhile Batirov moves on with an 8-0 win

1125: Adam BATIROV (BRN) against Zaur EFENDIEV (SRB) on Mat A will be looking for his second world title. Junior European champion Oleksandra KHOMENETS (UKR) gets a big throw for four to cut the lead to 4-8 against former cadet world champion Tsugumi SAKURAI (JPN).

1113: 2017 world champion at 65kg Zurabi IAKOBUSHVILI (GEO) is wrestling SUSHIL (IND) on Mat A. Sushil gets a point for passivity of the Georgian but Iakobushvili manages to tie it with a stepout. Another one gives him a 2-1 lead

1100: World silver medalist at 70kg Magomedmurad GADZHIEV (POL) begins his campaign with a 9-0 win over Nicolae COJOCARU (GBR) and Elahi leads Motoyama 6-0 in their match

1055: Goleij has done it! He beats Odikadze 4-0 and will move on to the second round. Odikadze looking a shadow of himself from the Olympics. This bout is followed by another Iran wrestler. Junior world champion Erfan ELAHI (IRI) is wrestling Jintaro MOTOYAMA (JPN) at 70kg

1045: Mojtaba GOLEIJ (IRI) and Elizbar ODIKADZE (GEO) are now wrestling on Mat B. Huge first round bout for the two. Odikadze has a world bronze medal and four fifth-place finishes