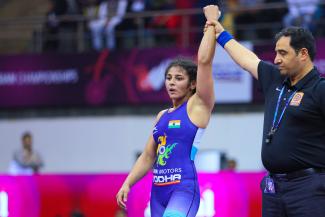 1845 hrs: GOLD MEDAL! SARITA (IND) defends her title! She beats Shoovdor BAATARJAV (MGL) 10-7 to capture the top medal at 59kg. The Indian had lost to the Mongolian in the morning but she avenges that loss in dramatic comeback

1825 hrs: They were wrestling to decide the silver and bronze at 55kg and with Madina USMONJONOVA (UZB) beat Aisha UALISHAN (KAZ), she will take the silver at 55kg

1815 hrs: GOLD MEDAL! Dulguun MUNKHBOLD BOLORMAA (MGL) captures the gold medal at 55kg as she wins all three of her bouts. She pins Hyungjoo KIM (KOR)

1805 hrs: A first period technical superiority win for SEEMA (IND) to win the bronze medal at 50kg. For the final now between Valentina ISLAMOVA BRIK (KAZ) and Jasmina IMMAEVA (UZB)

1800 hrs: Back for the final's session here in Almaty. All the action will be on Mat B, beginning with 50kg bronze medal bout between Yung Hsun LIN (TPE) and SEEMA (IND)

1330 hrs: We are all set for our semifinal on day one of women's wrestling

1310 hrs: Valentina Ivanovna ISLAMOVA BRIK (KAZ) gets the fall again! She has been outclassing her opponents here

1235 hrs: Dulguun BOLORMAA (MGL) dominating here in Almaty. He gets a victory by fall over Aisha UALISHAN (KAZ) at 55kg

1208 hrs: Domination from Mongolia! Delgermaa ENKHSAIKHAN (MGL) gets the pin in over NISHA (IND) at 68kg

1200 hrs: Shoovdor BAATARJAV (MGL) gets her opening win over defending Asian champion SARITA (IND). A close bout between the two but it ends 5-4 in the Mongolian wrestler's favour

1145 hrs: Dulguun BOLORMAA (MGL) gets going on Mat A with a 10-0 win against Madina USMONJONOVA (UZB)

1130 hrs: All set for day three here. Women's wrestling is underway with all the action on Mat A and Mat B