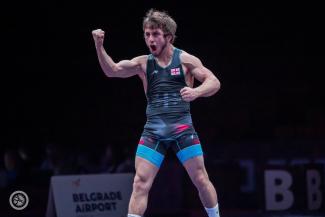 The third day of wrestling at the #WrestleNice Henri Deglane Grand Prix of France is headlined by Nugzari TSURTSUMIA (GEO), the reigning world champion at 55g.

4:22: What a way to kick off the '21 season! That'll do it for our coverage of the  Henri Deglane Grand Prix of France. Until next time, wrestling fans!

Kerem KAMAL (TUR) was one of six Turkish wrestlers to claimed #WrestleNice gold. He claimed his gold at 60kg. (Photo: Kadir Caliskan)

3:40: Mamadassa SYLLA (FRA) was awarded the 67kg after Gagik SNJOYAN (FRA) defaulted out of the gold-medal match.

3:21: Next up will be Mehmet CEKER (TUR) and Abdurahman ALTAN (TUR), who are wrestling for the 63kg gold.

3:16: What a way to kick off the finals! Serif KILIC (TUR) dug deep and fought off a late flurry of attacks and defeated  Elcin ALI (TUR), 4-3, in the 55kg finals. He led 4-0, but gave up three unanswered points before ultimately winning gold with the one-point victory.

3:13: How about the day that the Turkish Greco-Roman team is having. Of the six non-Nordic-style bracket finals, Turkish wrestlers occupy 7/12 gold-medal spots.

2:53: We're keeping things rolling! The first medal matches are underway on Mat A, while the remaining semifinals are wrapping up on Mat B.

2:29: It wasn't anything special but Basar got the job done and moved into the 87kg final with a 3-1 win over Zaleski.

2:21: Two-time world champion Metehan BASAR (TUR) is making his way to Mat B for his semifinals meeting with Terrence ZALESKI (USA).

The semifinals are ongoing, so as they wrap up and the finals berths are locked in, I'll continue to update the list below!

1:38: Semifinal matches are starting to get called to the mats. Yunus BASAR  (TUR) and Johnny BUR (FRA), who are wrestling for a 77kg finals berth, are the first semifinal match that we'll see,

1:05; Bout 33 on Mat B should be a good one. Acosta will face Rio Olympic bronze medalist Sabah SHARIATI (AZE).

12:41: World runner-up Rafiq HUSEYNOV (AZE0 and Individual World Cup runner-up Salih AYDIN (RU) are up next on Mat A. That match is at 82kg.

12:08: The quarterfinals matches are started to come on the match order chart.

11:28: Chile's first-ever world medalist Yasmani ACOSTA is set to take on Sulkhani BUIDZE (GEO) at 130kg. That match will be Bout 19 on Mat B.

11:23: Kamal leads Albert BAGUMYAN (ESP), 7-0, after the opening period. An inactivity, followed by a two-point gut and a four-point throw gives Kamal the 7-0 advantage. Kamal scored a takedown from a high-hip shot and won the match, 9-0.

11:19: We had a short wait for Kamal to get to the mat, then the mats needed to be cleaned. We should be good now! Either way, Kamal is wrestling now on Mat B.

11:09: Turkey has a few heavy hitters coming up. We'll see world silver medalist Emrah KUS wrestle in Bout 16, and on Mat B, one of my personal favorites, Kerem KAMAL, will wrestle in Bout 14.

10:58: Tsurtsumia is rolling in his first match. He's up 7-0 heading into the second period and hasn't been tested yet in his opening-round match. He closed out the match with an early second-period takedown and earned a spot in tonight's 55kg semifinals.

10:33: Reigning world champion Nugzari Tsurtsumia is coming up shortly on Mat A. He'll be up in five matches (Bout 10)  on Mat A.

10:17: Selcuk CAN (TUR), the reigning European bronze medalist, is looking for his third consecutive medal finish. Last year, he finished the Matteo Pellicone, European Championships and Zagrebb Open with a silver and two bronze medals, respectively. He's coming up on Mat A.

10:10: Let's get things rolling. The third and final day of wrestling is underway and we'll start our day by watching two-time U23 world bronze medalist Islam ABBASOV (AZE). He'll wrestle Gurami KHETSURIANI (GEO) in Bout 8 on Mat B, 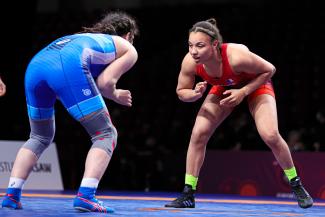