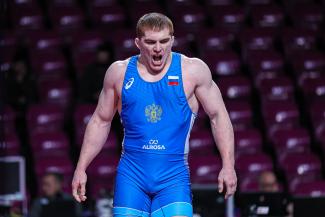 WARSAW, Poland (April 24) -- Freestyle and women's wrestling are behind us, and we move into the final two days of Greco-Roman action at the European Championships.

17:53: That does it for our semifinal coverage. We'll take a short five-minute break and resume action with the Day Six medal matches.

17:27: Three-time European champion Frank STAEBLER (GER) was expected to at least wrestle for 72kg gold, but after he was upset in the quarterfinals, it'll be Shmagi BOLKVADZE (GEO) and Malkhas AMOYAN (ARM) wrestling for gold.

17:11: Mateusz BERNATEK (POL) does it! He edged Slavik GALSTYAN (ARM), 5-4, and will wrestle for European gold at 67kg in his home country. The Polish wrestler will take on Tokyo Olympian Mate NEMES (SRB) in Sunday's gold-medal match.

17:05: The two favorites to reach the finals at 60kg were Sergey EMELIN (RUS) and Kerem KAMAL (TUR). They both walked their way to the finals and wrestle on Sunday night for the European title.

16:45: We're back! Please see the below tweet for the upcoming semifinal match order.

13:42: Down goes Staebler! Can trailed 5-0, but outscored Staebler 6-1 and claimed a spot in the quarterfinals with a 6-6 criteria win. He'll take on the winner of Roman PACURKOWSKI (POL) and Christoph BURGER (AUT) for a spot in Sunday night's 72kg finals.

13:30: Three-time world champ Frank Staebler is coming up next on Mat B. He'll kick off his question for a third European title against last year's continental bronze medalist Selcuk CAN (TUR).

13:04: Fredrik BJERREHUUS (DEN) just made his first appearance since qualifying Denmark for the Olympic Games at 67kg through his fifth-place finish at the '19 World Championships. He cruised to a 9-0 win over Hungary's Mate KRASZNAI. Bjerrehuus will wrestle the winner of Andreas VETSCH (SUI) and Maksim NEHODA (BLR) next.

12:38: Alex KESSIDIS (SWE), the 77kg world silver medalist from Nur-Sultan, is wrestling on Mat B. He's wrestling up at the non-Olympic weight of 82kg. Kessidis wrestled up at 82kg earlier this year at the Grand Prix of Zagreb. In that appearance, he went undefeated and claimed gold.

12:27: European champions Gevorg GHARIBYAN (ARM) and Rajbek BISULTANOV (DEN) are coming up next on Mats A and C, respectively.

11:53: Three-time world champion Frank STAEBLER (GER) will be in action today. The "Mele Machine" is wrestling up at the non-Olympic weight of 72kg, where he's looking for a third career continental title. He'll wrestle on Mat B in eleven matches (Bout 426).

11:37: We'll start with three repechage matches on each mat before running into the Day Six matches.