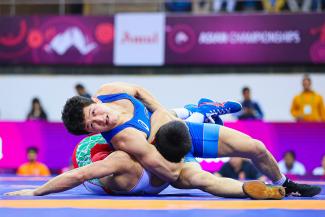 ULAANBAATAR, Mongolia (April 24) -- The final of the Asian Championships is here. After 10 champions in Greco-Roman and women's wrestling each, the freestyle will get the 10 champions as well.

Five of the 10 were decided Saturday and the remaining five will be on Sunday. Rio Olympics silver medalist Rei HIGUCHI (JPN) is wrestling at 61kg and is the favorite to win the gold.

13:40: The morning session is over. The 10 finalists in 5 weight classes are set and the medal bouts will begin 1800 hours local time.

13:36: Yergali did give up a takedown but did not let Jung get a turn. He wins 9-6 by countering Jung's final attack. Yergali will face Yadollah MOHEBI (IRI) in the 125kg final. Mohebi had to stepouts and a takedown against Batmagnai ENKHTUVSHIN (MGL) in the first period before Ekhtuvshin scored a takedown of his own in the second. But all his other attacks were easily countered by Mohebi as he secured a 12-2 win.

13:33: Alisher YERGALI (KAZ), the Asian champion at 97kg, leads Yeihyun JUNG (KOR) 7-0 in the 125kg semifinal. Yergali lost his concentration for a moment and now Jung has scored a four-pointer. Can Jung score 4 more with 40 seconds remaining?

13:27: Nurkozha KAIPANOV (KAZ) once again leads a series of leg laces to lead 5-0 against Islambek OROZBEKOV (KGZ) at the break in the 74kg semifinal. Orozbekov gets a takedown in the second period but gives up one as well. He then gets a duck under and gut to make it 9-6. Kaipanov counters with a single leg and leads 11-6. Orozbekov's attack is countered with a double to four-pointer exposure from Kaipanov as he wins 15-8.

13:22: Higuchi starts out the second period with a low single-leg attack, and stops Zholdoshbekov's attempt to counter to gain a takedown for an 8-4 lead. He repeats it and how he's up 10-4. With 1:24 left, it's the same move for another takedown, and this time he pops a gut wrench for a 14-4 technical fall at 4:50. A short time earlier,  Darioush HAZRATCGHOLIZADEH (IRI) fought back from a 5-0 deficit against Akbar KURBANOV (KAZ) in the other semifinal, scoring the winning takedown with :12 left to win 6-5.

13:21: Deepak PUNIA (IND) hits a four with a whizzer in the second period to lead 5-0 against Gwanuk KIM (KOR). The underhook defense of Punia keeps giving him the advantage over his opponents.

13:19: Azamat DAULETBEKOV (KAZ) with a strong performance as he stuns Saiakbai USUPOV (KGZ) with a series of gut wrenches to make it to the 86kg final in which he will face the winner of Deepak PUNIA (IND) vs Gwanuk KIM (KOR)

13:16: In the featured match of the session in the 61kg semifinals, Rei HIGUCHI (JPN) comes out with a takedown, but Ulukbek ZHOLDOSHBEKOV (KGZ) responds with a 4-point counter lift. Higuchi ties the score with a roll from an attack, but he's trailing on criteria. With :04 left in the first period, the Rio Olympic silver medalist bulls his way to a takedown and a 6-4 lead.

13:03: Yones EMAMICHOGHAEI (IRI) has Byambadorj BAT ERDENE (MGL) in the semifinal and he begins with a takedown and roll to lead 4-0. A series of takedowns and he wins 10-0 to reach the 74kg final

12:50: In another 86kg quarterfinal, Muhammad INAM (PAK) trailed 5-0 against Saiakbai USUPOV (KGZ) but then scored a takedown before getting a point for passivity. He got an exposure to lead 5-5 with 6 seconds remaining but Usupov scores the reversal to win 6-5

12:45: Anirudh KUMAR (IND) had made it 4-4 after Yeihyun JUNG (KOR) had hit an early four-point throw. But Jung scored a takedown with 30 seconds remaining and adds another as he counters an attack to make it 8-4 and win the bout.

12:42: At 86kg, world silver medalist Deepak PUNIA (IND) is wrestling against Mohsen MOSTAFAVI (IRI). He gets the first point for Mostafavi's inactivity before giving a takedown on edge. Punia leads 3-0. A lost challenge gives him 4-0 in the second period. None of Mostafavi's attacked worked and Punia wins 6-0

12:40: Nurkozha KAIPANOV (KAZ) is in real form at 74kg. He gets a takedown and then locks Ikhtiyor NAVRUZOV (UZB) in lace to win 11-0 inside the first minute.

12:35: The semifinal in the bottom half of the bracket at 61kg has been set. It will be Akbar KURBANOV (KAZ), who ousted 2021 world U23 bronze medalist Narankhuu NARMANDAKH (MGL) by a 10-0 technical fall, and Darioush HAZRATCGHOLIZADEH (IRI), who took advantage of a clearly winded 2021 world junior bronze medalist Alibeg ALIBEKOV (BRN) to rally from an 11-4 deficit with 2 minutes to a 14-11 win.

12:30: A thrilling quarterfinal at 74kg. Byambadorj BAT-ERDENE (MGL) was leading 5-2 with 20 seconds remaining and a scramble resulted in Seungbong LEE (KOR) scoring a takedown. He tried to get a roll but could not. Baterdene wins 5-4

12:17: Yones EMAMICHOGHAEI (IRI) has countered Diachi TAKATANI (JPN) every time the Japanese has tried to attack. Emamichoghaei now leads 6-2 as they battle it out in the 74kg quarterfinal. Takatani with a leg attack and converts that into a takedown. The final 20 seconds had Emamichoghaei being passive which the Japanese corner challenges, asking for a caution and passivity point. However, the jury rules it out. Emamichogaei wins 7-5

12:15: Viky CHAHAR (IND) pulled a rabbit off his hat to defeat Mirian CHYNYBEKOV (KGZ) and advance to the semifinals at 82kg. Just seconds after giving up an exposure that put the Kyrgyz ahead 3-2, Charhar somehow reversed the situation with :05 left for a 4-3 win. The 92kg semifinals are now set: Takuma OTSU (JPN) vs Amirhossein FIROUZPOURBANDPEI (IRI), and Charhar vs Orgilokh DAGVADORJ (MGL)

12:08: Rei HIGUCHI (JPN), perhaps still smarting from missing out on the Tokyo Olympics and the chance to get the gold he was denied in Rio, looked like a man on a mission in handily putting away Mangal KADYAN (IND) by 10-0 technical fall. Higuchi started with a pair of takedown-gut wrench combinations, then ended the match with an exposure off a tackle attempt.

12:03: Yeihyun JUNG (KOR) exposes Rustam ISKANDARI (TJK) and then holds him to the back to secure the fall in the second period at 125kg.

12:02: Orgilokh DAVADORJ (MGL) gets the home crowd charged up with a 10-0 technical fall over Ajiniyaz SAPARNIYAZOV (UZB ) to advance to the semifinals at 92kg.

11:59: 2020 silver medalist and top seed Takuma OTSU (JPN) turns Jinmyeong KIM (KOR) over on a takedown counter for a 5-0 lead, and looks to be content with just running out the last 80 seconds in their quarterfinal clash at 92kg. But he manages to lever the Korean over enough to record a fall with :13 left.

11:55: Navruzov takes a stepout and leads 11-4. He is cautioned for headbutting Tushir who adds three takedwons to make it 11-10 but the time runs out. Navuroz moves into the quarterfinals.

11:50: Ikhtiyor NAVRUZOV (UZB) begins his 74kg qualification with two big arm throws to be up 8-0 against Yash TUSHIR (IND). He then gets countered for a takedown before Navruzov adds two stepouts to lead 10-2. Tushir gets a takedown to make it 10-4 at the break.

11:41: Diachi TAKATANI (JPN) is up at 74kg and he has a quick fall over Abdullah ABDALKAREEM (TKM) in the opening round.

11:39: Defending 61kg champion Jahongirmirza TUROBOV (UZB ) easily handles Sampath WATHTHE GEDARA (SRI) in a 12-0 technical fall. He will next face 2020 champion Ulukbek ZHOLDOSHBEKOV (KGZ) in the quarterfinals, with the winner likely getting a semifinal clash with Higuchi who has Mangal KADYAN (IND) in the quarterfinals. Kadyan began with an 11-0 technical fall over Mekan MUHAMMEDOV (TKM).

11:34: Rio Olympic silver medalist Rei HIGUCHI (JPN) begins his campaign for the first Asian gold medal by overwhelming Ali ALHOHAINI (KUW) in their qualification match at 61kg. A takedown and four straight lace locks and that was all for the Kuwaiti in 26 seconds.