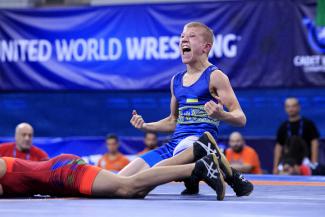 "It is very important for Ukraine as this championship is qualification on Youth Olympic Games which will be held in Argentina in October of this year,” said Lalovic, a member of the IOC executive board. “I know that they will do an exceptional job of hosting.”

"We have an experience of holding serious European sports competitions. Last year we have organized the European Boxing Championship in Kharkiv and the European championship on a diving in Kyiv,” said Igor RAYNIN, Head of Presidential Administration. “This year we will organize two finals of the Champions League of UEFA. And, certainly, the European Cadet Wrestling Championship - we are capable to organize at the high international level.” 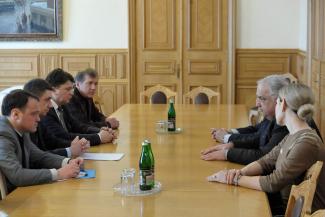 Raynin also noted that the all-European sporting event much attention from the President of Ukraine, the Ministry of Youth and Sport, the Kiev city administration and the Ukrainian Wrestling Association.

Raynin said the preparation for competitions of such level the conditions guaranteeing safety and respect for each athlete in full accordance with the international rules and the current legislation of Ukraine will be created.

The parties have reached the agreement that national federations of the countries which plan to be presented in the European Wrestling Championship have to submit the application for participation of the athletes in due time.

The Minister of youth and sport of Ukraine Igor ZHADNOV and the first vice-president of Ukrainian Wrestling Association Alexandr DOROVSKOY also participated in the meeting.

Lalovic and Tzenov had also meetings with Vice-Prime Minister of Ukraine Vyacheslav KYRYLENKO where they discussed all outstanding questions connected with organization of future European Cadet Wrestling Championship in Kyiv.

"Last year Ukraine has held a number of sports competitions of the international level - the World Ice Hockey Championship in the IA division, the European Boxing Championship, the European diving championship,” said Kyrelenko. “And we will do everything possible that this Championship have taken place at the high level.” 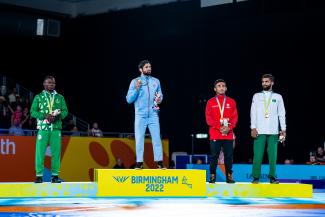 COVENTRY, England (August 6) -- As the Commonwealth Games came to a close, two of the most successful countries in the history of the Games -- Canada and India -- established their supremacy, sharing five of the six gold medals on offer on Saturday.

India won the freestyle golds at 57kg and 74kg along with the 53kg gold in women's wrestling. Canada had two champions on Saturday with Justina DI STASIO (CAN) winning the 76kg gold while Nishant RANDHAWA (CAN) winning the 97kg gold.

Miesinnei GENESIS (NGR) was the other champion on Saturday as she claimed the third women's wrestling gold for Nigeria by winning the 50kg weight category.

Kumar finished all three of his bouts well before the six minutes and showed the gulf in class in 57kg in Birmingham.

Wrestling Nigeria’s multiple-Commonwealth medalist Ebikewenimo WELSON (NGR) in the final, Kumar used a leg lace to lead 8-0 before getting a takedown in the second period to finish the bout 10-0.

This was Kumar’s first medal at the Commonwealth Games.

“It’s always special to win the medal at Games and this was also special,” Kumar said. “Tokyo silver was special and so is this medal.”

Kumar, hoping to win a World Championships medal in Belgrade, has been on an incredible run, winning three golds and losing only one bout since Tokyo.

He did give up four points in the semifinal against Asad ALI (PAK) but said that it was more about getting stuck in a move.

"It's wrestling and sometimes we get stuck in a move," he said. "I can't say I was off guard or wasn't moving well. Just a move I got stuck in and he managed to score." 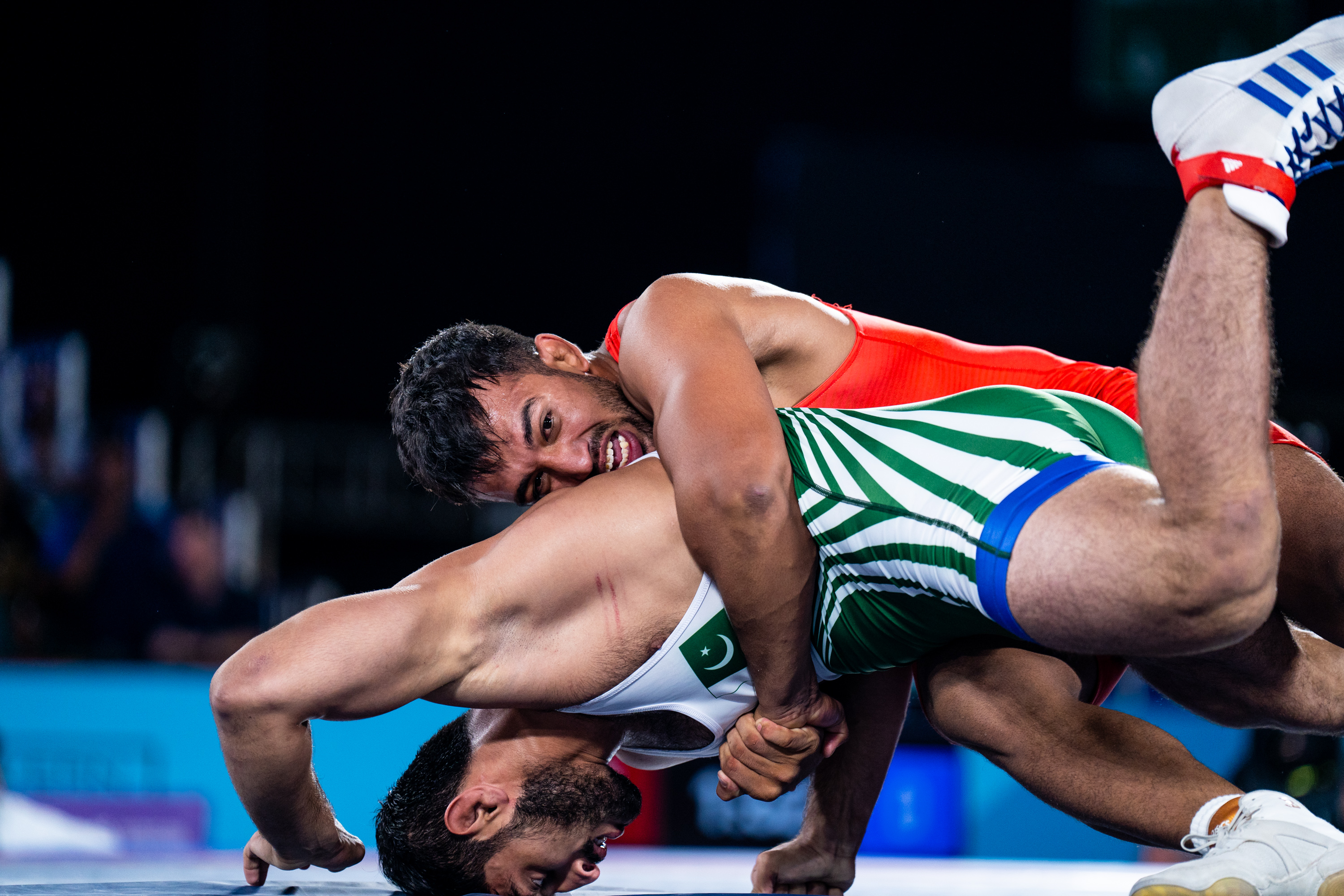 NAVEEN (IND) added another gold to India’s account as he dominated the 74kg field and defeated Muhammad TAHIR (PAK) 9-0 in the gold bout.

Tahir was put on passivity as well when Naveen continued his attacks. Four takedowns gave him the eight other points.

A bronze medalist at the Asian Championships, Naveen will try to make the Indian team at 74kg for the World Championships. 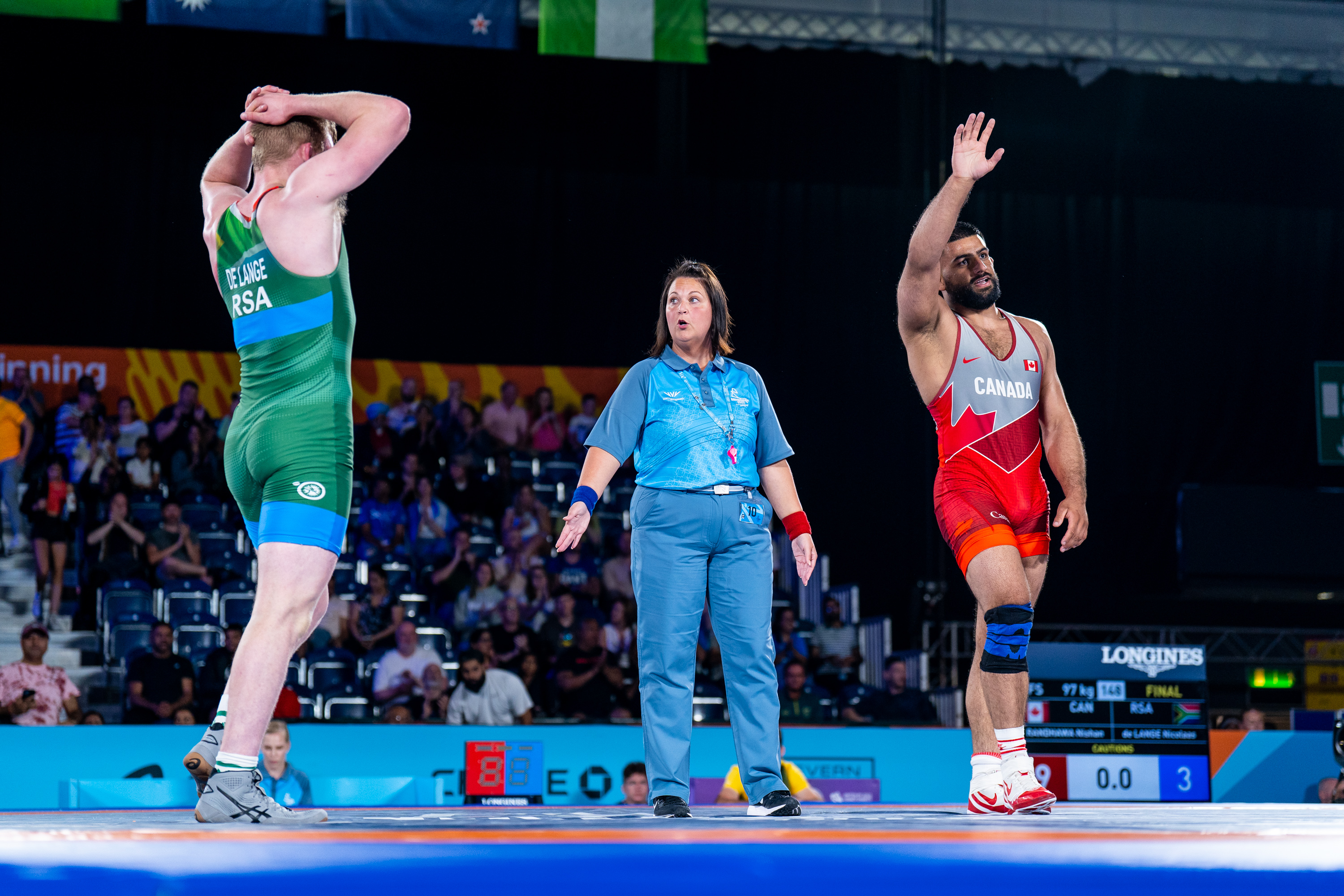 At 97kg, Nishan RANDHAWA (CAN) defeated two U20 World bronze medalists en route to winning the gold medal with some tough wins.

In the quarterfinal, he wrestled Deepak NEHRA (IND) and almost suffered a loss as Nehra was leading 6-6 on criteria with nine seconds remaining. But Randhawa scored a stepout and got the all-important point to win 7-6 and reach the semifinals. He managed to beat Tayab RAZA (PAK) 7-0 to make it to the final.

"Nehra was defending very well and it was a back-and-forth match," Randhawa said. "But I knew I have enough time to score a takedown. He went to the zone and I capitalized with the stepout."

He wrestled another U20 world bronze medalist in the final in Nicolas DE LANGE (RSA) and made it look easy with a 9-3 win for the gold.

"I have wrestled him before at the U20 Worlds and I know his style," he said. "It's great to win the gold here."

Randhawa, a U20 bronze medalist himself, will now be hoping to medal at the senior World Championships in Belgrade, Serbia.

"I train in Iowa and I believe in my potential," he said. "As you train with the best in the world, you keep improving and hopefully I will be able to beat the wrestlers at 97kg. If not now, then when?" 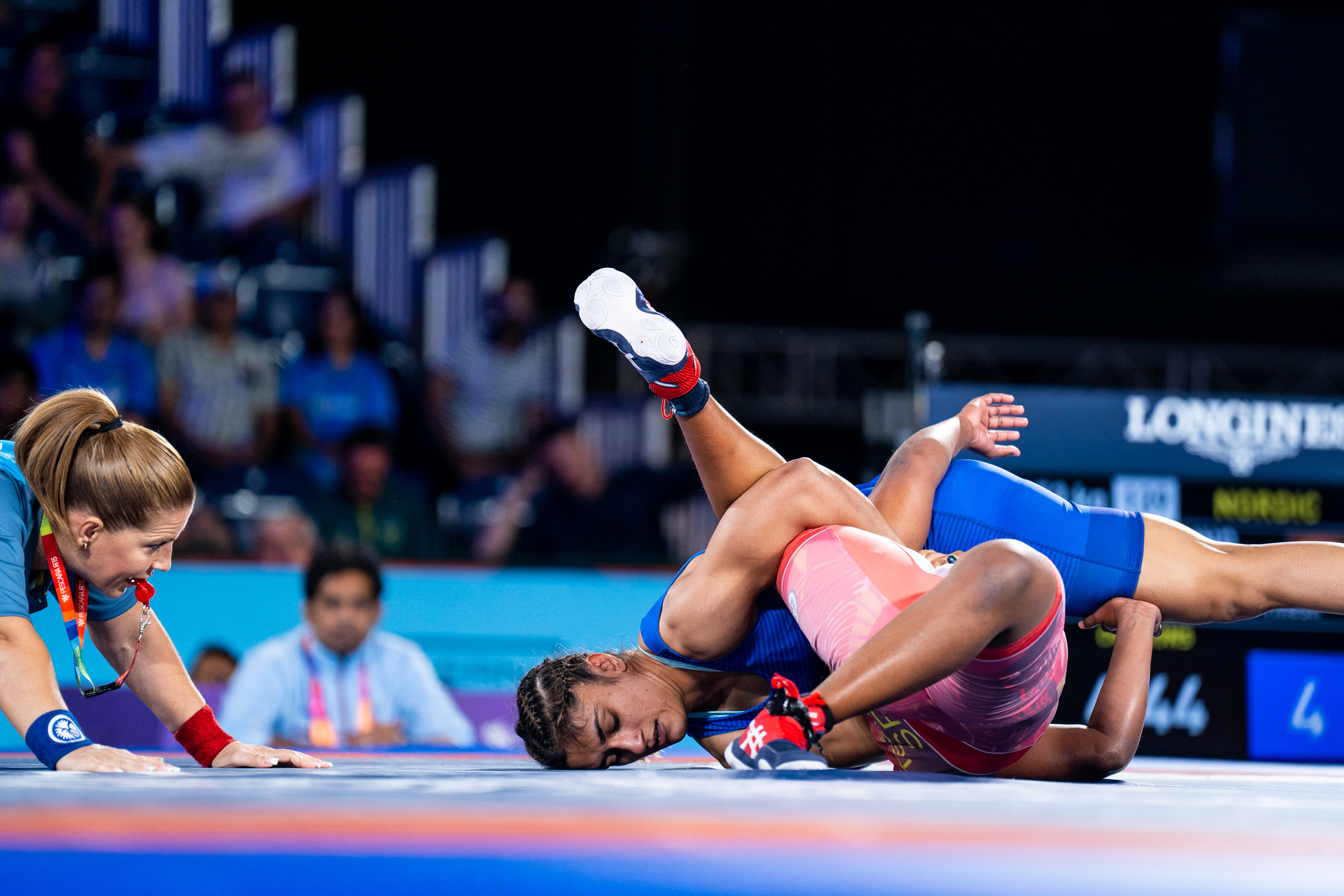 Her cousin sister Geeta PHOGAT (IND) may be the first Indian woman to win the Commonwealth gold but Vinesh PHOGAT (IND) became the first woman from the country to win it three times.

In a confidence-boosting gold win in Birmingham, Phogat defeated world bronze medalist Samantha STEWART (CAN) and African champion Mercy ADEKUOROYE (NGR) in Round 1 and Round 2 to all but confirm the gold in the morning session.

She pinned Stewart and almost pinned Adekuoroye but the Nigerian was in danger position for close to two minutes and lost 6-0.

"It's a good confidence-boosting win for me," Phogat said. "Canada and Nigeria do pose a challenge in this tournament but thankfully I managed to win here." 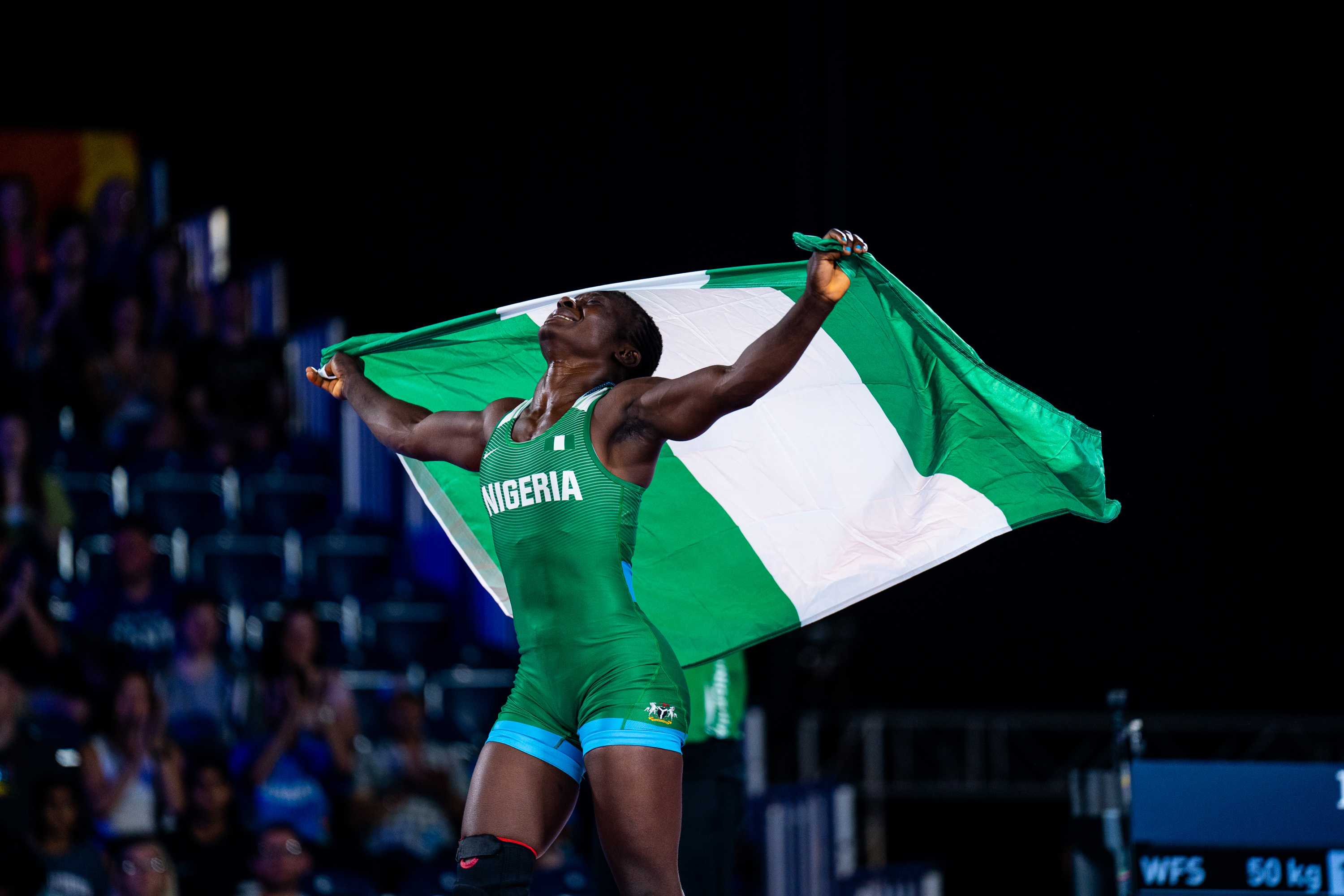 At 50kg, Madison PARKS (CAN) and Miesinnei GENESIS (NGR) were involved in a close battle in the gold medal bout with Parks scoring a stepout when she was put on the activity clock. But Genesis took a 1-1 criteria lead and as the match entered the final minute, it looked like Genesis will hang on for a 1-1 win but hit a lateral drop and secured the fall to win Nigeria's third gold medal in women's wrestling.

As she was trailing, Parks went for a single leg shot but got countered for the pin. She had made a stunning comeback in the semifinals against Pooja GEHLOT (IND). After giving up a six-point lead, Parks slowly worked her way with takedowns and made it 6-4. She scored a takedown with nine seconds remaining on the clock. Gehlot, hoping to keep her one-point lead, moved away but Parks sprung to action and hit a huge underhook for four to win 9-6.

Genesis was the third gold medalist for Nigeria after Odunayo ADEKUOROYE (NGR) and Blessing OBORUDUDU (NGR) won the gold at 57kg and 68kg respectively. 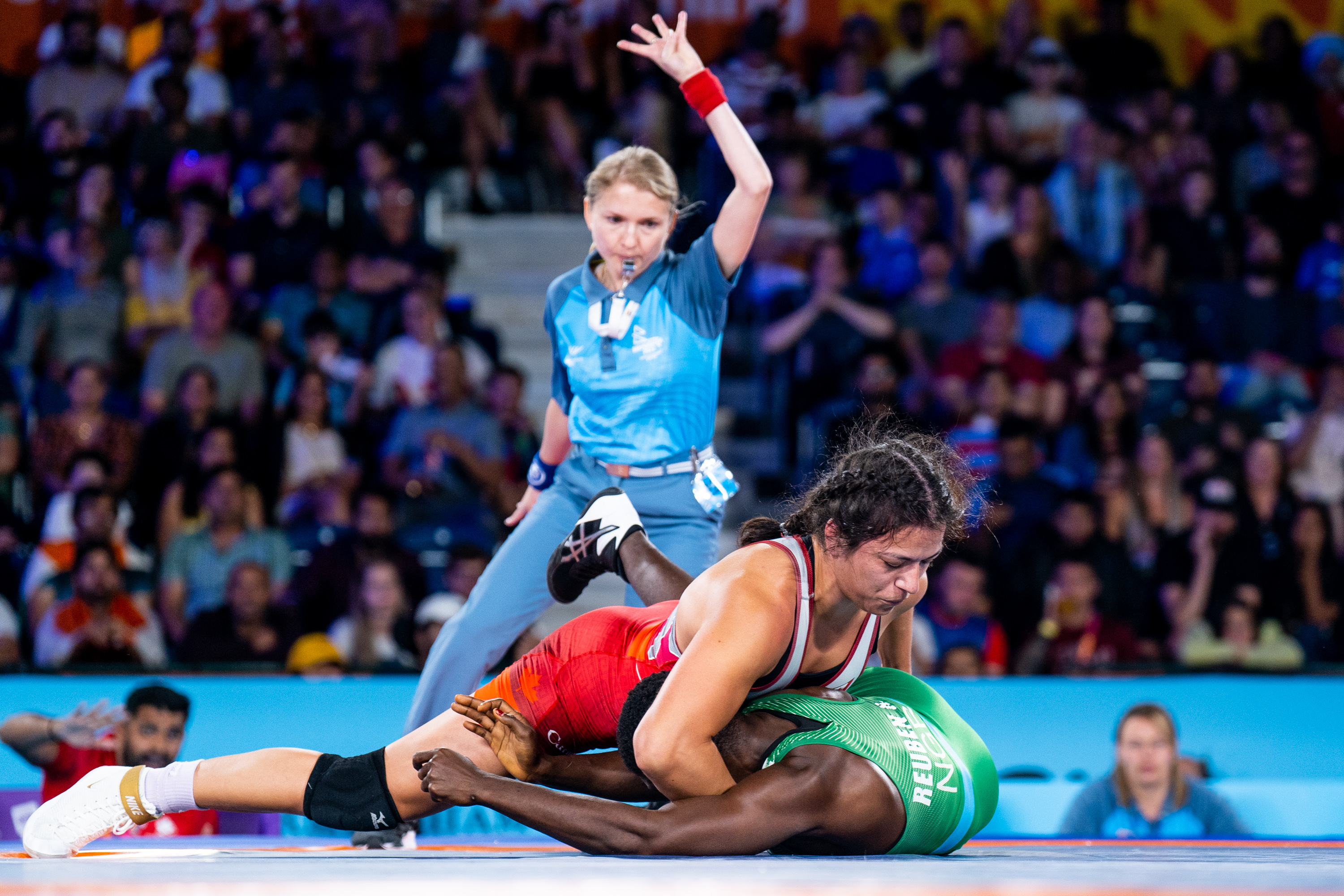 The final gold of the night went to former world champion Justina DI STASIO (CAN) who defeated Hannah RUEBEN (NGR), 4-2, in the final to capture her first Commonwealth Games gold.

Her's was the only big move of the final as she hit a four-pointer against Rueben who managed to score only two points.

Earlier in May, Di Stasio made a comeback to the sport after two years and managed to win a bronze medal. But with ambitions of winning the World Championships gold as she did in 2018, Di Stasio got a big shot in the arm with the gold in Birmingham.