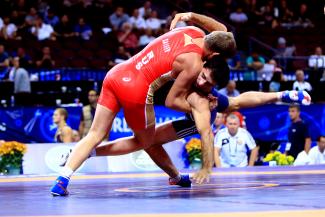 Saleev, the European Games gold medalist at 80kg, snuck by Baku 2015 champion at 85kg David CHAKVETADZE, 5-1, with a late flurry in the middleweight semifinals and then pipped 2014 Poddubny champion Bekhan OZDOEV, 3-2, in the final.

Saleev also cobbled together a 4-3 win over world silver medalist Rustam ASSAKALOV (UZB) in the quarterfinals.

Meanwhile, Labazanov slipped past another European Games champion Stepan MARYANYAN, with an arm-throw to go-behind combination and then exposure for a quick 4-0 lead in the 59kg semifinals. 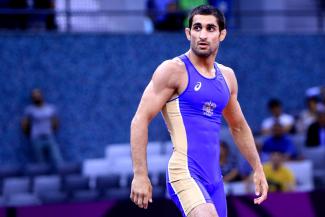 Labazanov, who also defeated Beijing 2006 gold medalist Nazir MANKIEV (RUS) by technical fall in the quarterfinals, nailed down his triumph with a 2-0 victory over 2014 world bronze medalist Elmurat TASMURADOV (UZB).

Russia wrestlers secured 12 berths for the Rio 2016 Games at the 2015 world championships last September in Las Vegas. The qualified categories include all six in freestyle, four in Greco-Roman and two in women’s wrestling.

Russia’s next chance to secure the six remaining categories, including 59kg and 85kg in Greco-Roman, will be at the European qualifier in Zrenjanin, Serbia, April 15-17. There will also be two world qualifying tournaments in April and May.

Tasmuradov, who defeated 2014 world silver medalist Mingiyan SEMENOV (RUS), 1-1, in Saturday’s semifinals will also seek a return to the Olympic Games when the Asian qualifying tourney is held in Astana, Kazakhstan in March.

Also on opening day in Tyumen, European Games bronze medal winner Iosif CHUGOSHVILI (BLR) racked up three technical falls in the early rounds at 130kg and held on for a 2-2 win over Vitali TSUR (RUS) in the championship final.

The final gold medal handed out Saturday was to Valeri GUSAROV (RUS), who defeated Narek GRIGORYAN (RUS) by fall at the non-Olympic weight category of 71kg.

Wrestling at the Sport Complex Centralny in Tyumen concludes Sunday with action in the 66kg, 75kg, 80kg and 98kg categories.