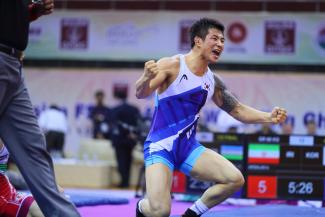 NEW DELHI (May 10) – Korea stole the show in the morning session on the opening day of the Asian Senior Wrestling Championships, gaining places in the gold medal finals in four of the five Greco-Roman divisions in action Wednesday. 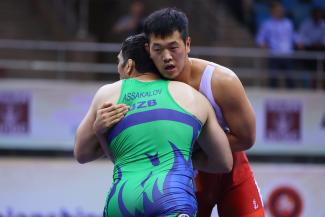 Oh will be joined in the finals in the evening session by PARK Daeseung (75kg), KIM Junehyoung (80kg) and KIM Seungjun (98kg). And the East Asian nation could make it five medals in five weight classes as KIM Minseok will be contesting the 130kg bronze medal match.

"The Korean team is [in] good condition," team leader LEE Sangwon said. "India is very warm, but Korea team fights to the last."

Along with the Korean quartet, the finals were entirely filled out by wrestlers from Iran and Kazakhstan, who have three. Ramin TAHERISARTANG (IRI) will attempt to win his third straight continental gold when he faces Kim Junehyoung for the 80kg title. Taherisartang scraped past Danyal GAJIYEV (KAZ) 3-1, to advance to the final.

In the only gold medal final missing a Korean contestant, Damir KUZEMBAYEV (KAZ), the 2016 bronze medalist, will face Behnam MEHDIZADEH (IRI) at 130kg.

At 75kg, 2016 silver medalist Dilshod TURDIEV (KAZ) fell at the first, losing a 6-4 thriller to Singh GURPREET (IND), much to the delight of the local crowd. Turdiev scored a 4-point throw to have the advantage at 4-4 going into the final period, when Singh shrugged off a headlock to score the decisive takedown.

The wrestler of the session, however, was Korea’s Oh, who used a 4-point throw and roll to beat Tasmuradov. In the semifinals, Arsalan took a 5-1 lead over Oh when he got off balance attempting a lift and roll and Oh scored five quick points with a reversal and gut wrench.