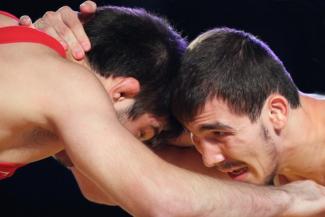 Khadjiev, who came to France from Russia as a boy, scored with a single-leg takedown in the first period of the final at Dom Sportova arena added a force-out point in the second for a 4-1 win over Mahammadhaji MUKHUTOV (AZE) and France’s first junior gold medal for men.

According to the international wrestling database, France’s only medal in freestyle at the junior world championships was a bronze medal won by Alcide LEGRANDE (FRA) at 70kg in 1980.

France has won three bronze medals in Greco-Roman over the years, most recently by Yasin OZAY (FRA) at 60kg on the opening day of this year’s championships in Zagreb.

Meanwhile, Russia won a pair of gold medals and a bronze as Iran and Turkey also bagged three medals on the opening of the freestyle events.

Russia is second with 28 points, followed by Turkey and the United States with 25 points each.

Kyle SNYDER (USA), the defending champion at 96kg, fell in the quarterfinals to Gogaev, but rebounded for a bronze medal with a 7-1 win over Asia junior champion Pedram JAMSHIDI (IRI), denying Iran a fourth medal on the first day.

Khasan BADRUDINOV (RUS) scrambled out of a single-leg attempt in the first period and stepped over another leg attack in the second on his way to a 10-5 win over Makhmudjon SHAVKATOV (UZB), who a silver medal to the bronze he won last year in Sofia.

In the bronze medal bouts, European junior bronze medalist Emre DEMIRCAN (TUR) scored off a single leg attack to the outside and wrapped up Asian bronze medal winner PARK Chang-Jun (KOR) for the fall at 2:48.

Saber KHANJANI SHAHRESTANI (IRI) opened with arm-control for a dump to the back and quickly racked up an 8-0 lead over Jabari MOODY (USA). The Asia champ then went behind for a takedown and a 10-0 technical fall at 1:40 for the second bronze.

With sudden changes on both sides – offense to defense and back, Asia junior champion Iman SADEGHIKOUKANDEH (IRI) showed his experience and landed on top of a pair of arm-trap throws by Joseph McKENNA (USA) for an 8-0 win and the gold medal.

Vurghun ALIEV (AZE) was in on the legs throughout the six-minute bout with Dzianis MAKSIMOV (BLR) and coverted a number of the takedown attempts into points at the edge of the mat for an 8-3 decision and a bronze medal.

Former cadet world champion Gadshimurad RASHIDOV (RUS) overwhelmed Ivan BILEICHUK (UKR) on the feet and in par terre, forging a 10-0 technical at 1:22 for the second bronze.

Zelimkhan KHADJIEV (FRA), only ninth place one year ago in Sofia, wrestled a tactical bout with a single-leg takedown in the first period against Mahammadhaji MUKHUTOV (AZE) and a force-out in the second.  The only point he gave up was a penalty point off the 30-second shot clock.

Asia champion Reza MOZAFFARI JOUBARI (IRI) rolled up points with double-leg attacks going out of bounds to fashion a 13-3 technical fall over Andrey KARPACH (BLR) at 3:33 for a bronze medal.

Georgi GOGAEV (RUS, 13wj5/120, 12wc1) earned a point in the first period on passivity from European junior bronze medalist Yusuf Can ZEYBEK (TUR) and then opened up with a go-behind and gut wrench in the second for a 6-1 win and Russia’s second gold medal of the first day.

Vasile CARAS (ROU) score a lateral drop early in the second period for four points and made it stand for a 6-4 over European junior champion Murazi MCHELIDZE (UKR) in one bronze medal bout.

Kyle SNYDER (USA) locked up a head and leg for four points in the first period and added a go-behind and force-out in the second to defeat Asia champion Pedram JAMSHIDI (IRI), 7-1, preventing Iran from winning its fourth medal of the evening.