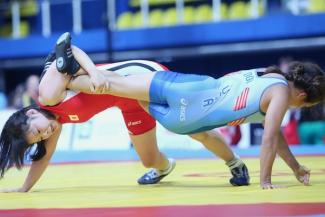 ZAGREB (August 7) – Returning champion Risako KAWAI racked up four technical falls on her way to claiming the 59kg crown on the opening day of female wrestling at the Junior Wrestling World Championships.

While it was Kawai’s second trip to the top of the medals podium at the junior world meet, newcomers Haruka UCHIJO (JPN) and Masako FURUICHI (JPN) also won their respective weight categories to give Japan three gold medals, equaling Japan’s entire gold medal haul in 2013.

Uchijo needed a late takedown and a cross-ankle turn in the closing seconds to defeat Ritu PHOGAT (IND), 4-4, on last-point criteria at 44kg, while three-time cadet world champion Furuichi came from four points down and rallied for a 15-5 technical fall against European champion Dalma CANEVA (ITA) at 67kg.

The fourth gold medal awarded on the first day of female wrestling at Dom Sportova went to European champion Natalya MALYSHEVA (RUS), who was steady in a 4-2 win over last year’s bronze medal winner Mercedesz DENES (HUN) in the 51kg final.

A total of 13 countries grabbed medals on the first of women’s events with Japan taking three gold medals and the United States grabbing a pair of bronze medals.

Haruka UCHIJO (JPN), trailing 0-4 with less than a minute to go in the championship bout with Ritu PHOGAT (IND), spun behind for two points and then locked up an ankle lace for a turn at 5:35 and the 4-4 criteria win.

In the bronze medal bouts, European champion Miglena SELISHKA (BLR) work her way behind for the takedown against Busra GORMUS (TUR) and then worked a gut wrench and press for the fall at 1:34.

Cadet world bronze medalist Marina DOI (USA) scored with a low single-leg attack in the second period and then wrapped up Weronika SIKORA (POL) with a cradle for the fall at 4:21 and the bronze medal.

European junior champion Natalya MALYSHEVA (RUS) scored go-behind takedowns on each side of the break and surrendered a late defensive takedown to European bronze medal winner Mercedesz DENES (HUN) for a 4-2 win.

Asian junior bronze medalist QIN Yingfeng (CHN) opened the second period with a drop for four points and added takedowns and a go-behind for a 12-1 technical fall at 4:28 over Vladlena VYDRENKO (BLR) and a bronze medal.

Liliya HORISHNA (UKR), the owner of two junior world bronze medals already, opened with a judo-type throw and rolled to an 11-1 technical fall over Nuray KARADAG (TUR), ending at 2:11 for her third bronze.

Risako KAWAI (JPN), last year’s champion at 55kg, circled behind Luisa NIEMESCH (GER), trapping the right arm of the European champion as she went by, and locked up for four quick gut wrenches for her fourth technical fall of the day.

Four-time European junior champion Petra OLLI (FIN) forged an 8-2 lead over the middle of the bout and then held on for an 8-6 win over last year’s silver medalist Braxton STONE (CAN) for her third bronze medal in the junior world meet.

European junior champion Dalma CANEVA (ITA) dropped Masako FURUCHI (JPN) to her back for four points from single-leg counter to open the championship bout. But Furuichi drew level at the intermission and did not look back as she forged a 15-5 technical fall at 4:41.

In a battle of European junior bronze medal winners, Ragneta GURBANZADE (AZE) scored with a fireman’s carry in the first period and a pair of double-leg takedowns in the second for an 8-4 win over Moa NYGREN (SWE).