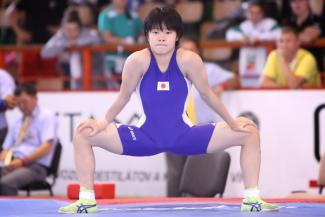 HUMENNE, Slovakia – Kika KAGATA (JPN) won for a third year in a row as Japan crowned three on the opening day of female wrestling at the Cadet Wrestling World Championships.

Kagata won all four of her bouts by fall or technical fall at Humenne Hockey Stadium, capping her Cadet career with a fall over European champion Leyla GURBANOVA (AZE) in the 49kg final.

Teshya ALO (USA), a bronze medal winner at the 2013 world meet, won one-point matches in the quarters and semifinals to take the 56kg title, while Khanum VELIEVA (RUS) won the battle of continental champions with a fall over Asia’s Irina KAPITANOVA (KAZ) in the 65kg final.

Despite its three champions, Japan holds only a three-point lead over Russia, 41-38, in the team rankings.  Ukraine is in third place with 26 points.

38kg (10 entries)
Two-time Asia champion Ai TAGUCHI (JPN) capped a dominating performance with a four-point arm throw and assigned Cristina-Elena ZOLTAN (ROU) the world silver medal for a second year in a row with a 10-0 technical fall at 1:58.

Sujata SUJATA (IND) stunned Asia silver medalist Laura ALMAGANGETOVA (KAZ) with two arm throws to open their bronze medal bout for an 8-0 lead and then scored two more to wrap up the technical fall, 16-6, at 1:25.

European champion Veronika RYABOVOLOVA (UKR) dumped Rahime ARI (TUR) to her back at the 1-minute mark and finished the fall at 1:34 with head-and-control.

43kg (13 entries)
Klippan Open winner Yui SUSAKI (JPN) scored a single-leg takedown midway through the first period and locked up figure-4 grapevine on the leg for the fall at 2:00 against Asia bronze medalist Sonu SONU (IND).

European champion Veronika GURSKAYA (RUS) scored a single-leg takedown and then stacked a cross-ankle lock for the fall at 1:56 against Ulkar BABAJEVA (AZE) to repeat as world bronze medalist.

BYAMBASUREN Munkhnar (MGL) tipped Europe No.5 Lisa ERSEL (GER) over from the front headlock position and pressed for the fall at 1:41.

49kg (18 entries)
Kika KAGATA (JPN) scored with a pair of single-leg takedowns from the front headlock against Leyla GURBANOVA (AZE, e1) and wrapped up the European champion for the fall at 1:59 for her third straight world championship title.

European silver medalist Suzanna-Georgiana SEICARIU (ROU) hit a fireman’s carry and then wrapped up a nelson and leg control for the fall against Kremana PETROVA (BUL).

Viktoria VAULINA (RUS) rebounded from a heart-breaking 1-1 loss to Gurbanova in the semifinals and rolled over Anna KROL (POL) with a fireman’s carry, double-leg and a headlock for the technical fall at 2:00.

56kg (19 entries)
Teshya ALO (USA, w3) scored a pair of tilts in the second period to wrap up a 9-2 victory over last year’s 43kg winner Ksenia NEZGOVOROVA (RUS) for the world title after winning a bronze medal last year in Zrejanin, Serbia.

European champion Alexandra WOLCZYNSKA (POL) dumped Ayse VATANSEVER (TUR) to her back with arm-and-leg control for the fall at 0:52 while Kumi IRIE (JPN, a1/52) rolled up a technical with four single-leg attacks against European bronze medalist Tatyana RIZHKO (UKR).

65kg (15 entries)
European champion Khanum VELIEVA (RUS) hoisted Irina KAPITANOVA (KAZ) off the mat with a double-leg attack and through in a Turk (leg control) on the return to the mat and pressed for the fall at 1:18 for the world title.

Yuliana YANEVA (BUL) forged a 4-0 lead with takedowns on each side of the break and the landed on top of a desperate throw attempt by European bronze medalist Alina LEVITSKA (UKR) at the close of the bout for an 8-0 victory.