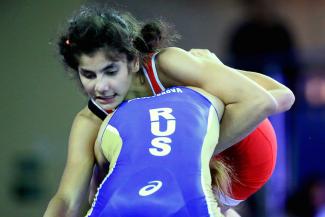 SALVADOR, Brazil (August 13) – Japan, known as the most dominant women’s wrestling program in the world, faltered Thursday night as burgeoning rival Azerbaijan took charge of the opening day of women’s wrestling at the Junior World Championships.

The island nation advanced three wrestlers to the finals but was held to only one champion, while Azerbaijan scored a pair of gold medals.

Turkan NASIROVA (AZE) did the most to unbalance the scales of tradition, besting Rina OKUNO (JPN), 5-2 in the finals at 44kg. The young Azeri used an opening four-point maneuver to burst out into the lead, but Okuno pushed back in the second earning a takedown and coming within a second of completing a match-winning equalizer.

Nasirova had previously been a runner-up at the 2012 Cadet World Championships and placed third at this year’s European Juniors. Okuno was a 2014 Junior bronze medalist.

The match -- which was highlighted by scurrying feet, wild leg maneuvers and pure aggression -- came down to a final takedown attempted by an exhausted Kremzer. The slight built Ukrainian was flattened upon entry, ceding the final two points and the championship title to an ecstatic Gurbanova.

Japan’s slide continued at 59kg where Elin NILSSON (SWE) used a pair of four-point throws, including an impressive pancake-to-headlock combo to best 2012 Cadet world champion Yoshimi KAYAMA (JPN), 8-2. The 2014 Junior European bronze medalist was in control from the starting whistle and cruised past the outmatched Kayama for the entirety of their six minute competition.

Wrestling continues tomorrow starting at 9am ET with women’s wrestling at 48, 55, 63, and 72kg 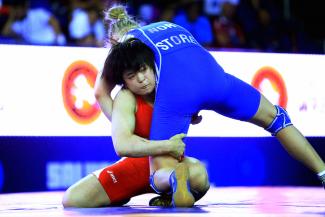