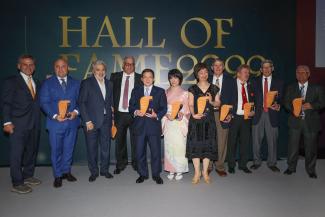 BELGRADE, Serbia (September 9) --- Superstars Saori YOSHIDA and Kaori ICHO, who combined for seven Olympic and 23 world championship gold medals and inspired the next generation of Japanese women that continue to dominate the sport, were among nine immortals inducted into the UWW Hall of Fame on Friday.

Two Greco-Roman wrestlers, a pair of American brothers in freestyle, another Japanese woman, one referee and one coach also gained a place in the shrine to wrestling greatness during a ceremony held in Belgrade, Serbia, as a prelude to this year's World Championships starting Saturday.

The inductees will be permanently recognized on the UWW website, at the UWW headquarters in Vevey, Switzerland, and in the international wing of the USA Hall of Fame located in Stillwater, Oklahoma.

Yoshida and Icho, who were both among the four inaugural Olympic champions when women's wrestling was added to the Olympic program at Athens 2004, were appropriately selected in the Legends category.

Yoshida struck gold in three straight Olympics and an unprecedented 13 World Championships, mostly at 55kg. Japan's flag-bearer at the London 2012 Olympics, Yoshida put together a streak of 119 consecutive wins in individual tournaments, a run that ended in the final match of her career that left her with the silver medal at the Rio 2016 Olympics. Her only two other losses to non-Japanese opponents came at World Cup team events.

Icho made history when she became the first wrestler and the first female athlete in any sport in Olympic history to win four consecutive gold medals, not to mention winning 10 world titles. She competed at 63kg for much of her career before moving down to 58kg when that became an Olympic weight class (now 57kg).

After Icho's epic victory at the Rio 2016 Olympics for her fourth gold, she was named a recipient of the People's Honor Award, used by the Japanese government to honor individuals in sports, entertainment and culture whose accomplishments have inspired society. Yoshida received the award in 2012 after winning her 13th straight world title.

The new Hall of Fame members in the Greco-Roman category are Pertti UKKOLA of Finland and Gheorghe BERCEANU of Romania, both winners of Olympic and world golds.

Ukkola won the gold at 57kg at the Montreal 1976 Olympics, and captured the world title the following year. He also won two world bronzes in his career, in 1975 and 1981. Berceanu made the top of the Olympic podium at Munich 1972 at 48kg, then took the silver at Montreal 1976. The Romanian won world titles in 1969 and 1970, and a silver medal in 1975, and was also a three-time European champion.

In Freestyle, American brothers John and Ben PETERSON will enter the Hall together. At Munich 1972, Ben, the younger of the two by two years, won the gold at 90kg and John the silver at 82kg. Four years later at Montreal 1976, they reversed that finish, with John taking a gold and Ben settling for the silver. Both brothers also won one silver and one bronze at the World Championships, while John had three World Cup golds and Ben had one gold and two silvers.

The Women's Wrestling inductee is Japan's Hitomi OBARA, the London 2012 Olympic champion at 48kg and an eight-time world champion. She won all but the last of her world under her maiden name of SAKAMOTO, and almost all at 51kg.

In the Coaches category, the newest Hall member is Yuri SHAKMURADOV of Russia. A 1970 world champion and three-time European champion himself, he coached 16 wrestlers, both male and female, to Olympic gold medals between 1976 and 2012.