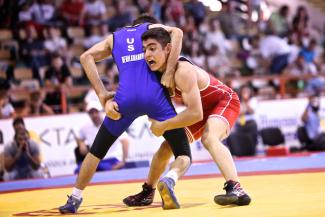 Aeini stunned and frustrated Russian hopeful Khadzhi DENILKHANOV (RUS) in the 46kg final with a mix of mind-boggling escapes from impossible situations and straight-ahead power wrestling for an 11-2 triumph in the 46kg final at Humenne Hockey Stadium.

Aeini’s win also appeared to portend a disappointing final session of freestyle for Russia which, nevertheless, took the team title with 78 points despite winning in only one of five medal bouts.

Russia claimed one champion – David BAEV (RUS) at 58kg on the first day of competition – with five silver medals and one bronze in an otherwise dominating display of wrestling.

Aeini helped lift Iran into second place as the Iranians also added three bronze medals to their haul for 68 points.

Mark HALL (USA) won the United States’ third gold medal of the freestyle events and lifted the U.S. into third place with 50 points.

Also on the final day of wrestling at the cadet championships, defending champion Andrey YATSENKO (UKR) defeated Vadim BIKOEV (RUS) in the 54kg final and European champion Teymur MAMMADOV (AZE) dropped Elbrus VALIEV (RUS) for four points on his way to a 7-2 win in the 63kg final.

46kg (22 entries)
Asia bronze medalist Erfan AEINI (IRI) countered every takedown attempt a frustrated Khadzhi DENILKHANOV (RUS) could throw at him and rolled toan 11-2 win.
In the bronze medal bouts, Erbolan SARKITBAEV (KAZ) hit an early arm-and-leg throw and held Nairi GHARSAYAN (ARM) for the fall at 1:32 for one bronze medal, while Asia silver medalist Nasanbuya NARMANDAKH (MGL) worked the duck-under to near perfection for a technical fall over Teimuraz VANISHVILI (GEO) to the other bronze.

54kg (24 entries)
Defending world champion Andrey YATSENKO (UKR) countered for a takedown then hit a double-leg for another and was off to the races against Vadim BIKOEV (RUS) for a 9-3 triumph.

63kg (24 entries)
Two-time European champion Teymur MAMMADOV (AZE) finally won a world title after a bronze medal in 2013 with a four-point double-leg takedown and a single-leg on his way to a 7-2 win over Elbrus VALIEV (RUS).

In the bronze medalists, Asia bronze medalist Amireza AKBARZADEH (IRI, a3) with a pair of takedowns in the second period for a 6-0 win over former European silver medalist Muhammed KUCUKYILDIRIM (TUR), 6-2, while Taro UMEBAYASHI (JPN) scored a late double-leg going out-of-bounds for a 4-2 win over Jasbir JASBIR (IND).

76kg (26 entries)
Mark HALL (USA) worked for a pair of go-behind takedowns, one on each side of the break, to snare a third gold medal for the United States with a 4-1 decision over Asian silver medalist ZANDANBUD Sumiyabazar (MGL). In the semifinals, Hall also defeated Asia No.1 Yajuro YAMASAKI (JPN), 9-4.

Asia champion Yajuro YAMASAKI (JPN) spotted Singh SURENDER (IND) a four-point lead in the first period and came back with four of his own to claim the bronze medal on criteria, 4-4.  Soslan LAVOEV (RUS) snared Russia’s only win of the session in similar fashion, 2-2, over Hamed MANAFAIAN (IRI).

European silver medalist Dmitri CEACUSTA (MDA) scored single-leg takedowns and gut wrenches at will for a 12-2 technical fall over Abdalla Hatem AIGIZAWEE (EGY) at 1:57 and one bronze medal while Asian silver medalist Naeim HASSANZADEH (IRI) rolled over Alan KELEKHSAEV (RUS), 13-3, at 3:54 for the other bronze.