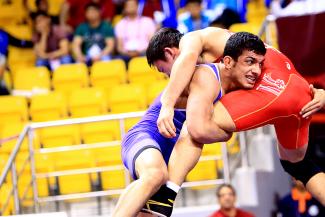 DOHA (May 7) – The Iranian men’s freestyle team won a pair of gold medals Thursday night at the Aspire Dome in Doha to finish atop the team rankings stand with four gold medalists, two runner-ups and 68 team points.

The Iranians were led on day two by Peyman YARAHMADI (IRI) who sprinted past Daisuke SHIMADA (JPN), 8-2 in the 74kg finals. The No.9 ranked wrestler in the world, Yarahmadi was at ease in the finals securing back-to-back takedowns in the second period to pull away from Shimada.

Iran’s other gold medal came from Mohammadhossein MOHAMMADIAN (IRI) who dominated No.11 Magomed MUSAEV (KGZ) for the 97kg gold medal, 10-3. Mohammadian found his attacks early and never relented, scoring a series of takedowns on the edge of the mat. Musaev was also the Asian Championship runner-up in 2014.

The night’s finals started at 61kg with No.11 Daulet NIYAZBEKOV (KAZ) battling Iran’s No.13 Behnam EHSANPOOR into the final seconds to secure a 3-3 criteria victory. Niyazbekov earned the win after Ehsanpoor gave up a caution in the first period and was unable to score after a flurry of activity in the final seconds.

Asian Games champion and 2014 world bronze medalist Bekzod ABDURAKHMONOV (UZB) upended Zelimkhan YUSUPOV (TJK), 6-4 in a thrilling back-and-forth match. Yusupov who is ranked No. 4 in the world, used twisting defense and creative finishes to frustrate No.9 Abdurakhmanov. However, the Uzbeki wrestler stayed aggressive on the outside single to find his finish with less than thirty seconds remaining on the clock and secure his first Asian Championship.

In the only women’s final, Vinesh VINESH (IND) looked to have the upset in the books, but trailing 2-1 Yuki IRIE (JPN) found a right side high crotch with 10 seconds remaining on the clock to steal the 3-2 victory. The title was Japan’s second in women’s wrestling after Kaori ICHO took the 58kg title on Wednesday.

Wrestling resumes tomorrow at 9am with women’s wrestling at 53kg, 55kg, 60kg, 63kg and 69kg. Finals will begin at 6pm and be streamed at UnitedWorldWrestling.org 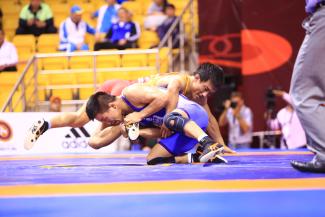