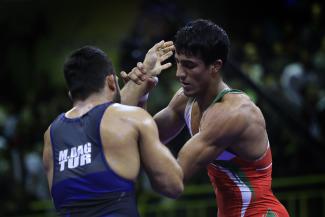 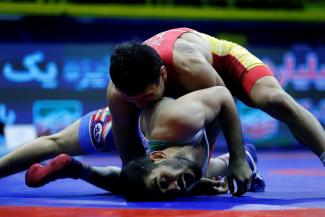 Former junior world champion Kaly SULAIMANOV (KGZ) earned two points with a takedown in the first period against Kudaibergen TURSYNOV (KAZ). In the second period Sulaimanov added four more points by a throw and cruised to a 7-2 victory.

Three-time world medalist Almat KEBISPAYEV (KAZ) picked up a takedown just 25 seconds into his finals match against Fevzi MAMUTOV (UKR). In the second period Mamutov was more offensive, but Kebispayev held on for a 2-0 victory. 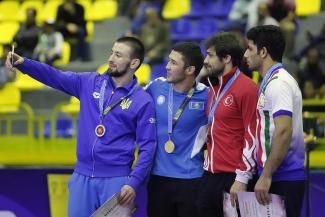 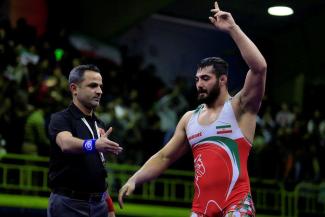 The 87kg final was a narrow match between Iran and Kazakhstan. MUTSOLGOV (KAZ) was leading 1-0 in the first period, but AZIZI came back to score with a step out and held on for the victory.

Olympic bronze medal winner Jenk ILDEM (TUR) suffered a 3-2 loss in the 97kg final match to Orkhan NURIYEV (AZE). In the last 30 seconds Ildem tried to get points by a gut wrench but NURIYEV was strong in par terre and took the victory.

“Adding to UWW ranking series made Takhti Cup a high-level tournament and the quality of the event was better than recent years.” 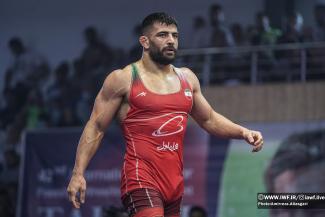 TONEBABON, Iran (June 13) -- Mohammadhossein MOHAMMADIAN (IRI) last won a World Championships medal in 2014. Competing at 86kg, he won a bronze medal. Since then, he has moved up to 97kg and will be fighting for his spot on Iran's national team for the Belgrade World Championships.

But achieve his second World Championships medal, Mohammdian will have to go through Mojtaba GOLEIJ (IRI) as the '21 Worlds bronze medalist won the gold medal at the prestigious Takhti Cup last week.

The tournament was a qualifying step for the wrestlers to enter the selection trials for the World Championships that will be held in Belgrade from September 10 to 18.

At 97kg, Goleij came home with a narrow 2-1 win against Amirali AZARPIRA (IRI) to book his spot in the trials against Mohammdian. The two will be the options for Iran's coaching board for Belgrade. 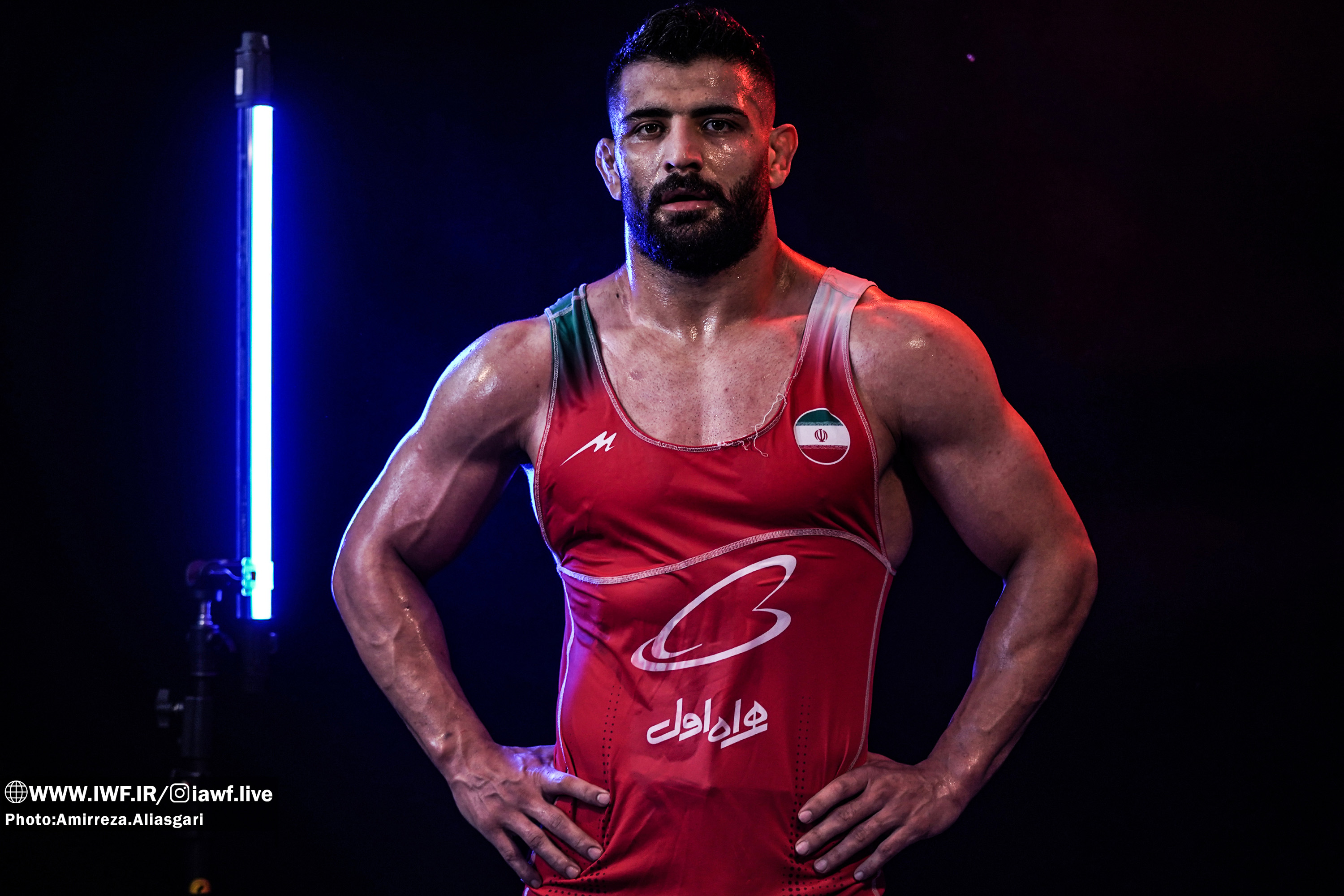 A big match-up was also set at 86kg. After achieving three World Championships medals over the last six years, Alireza KARIMI (IRI) missed his spot on the national team due to injury for three years. He made a move up to 97kg before 2019 and had mixed success. He did win a silver medal at the '19 Worlds at 92kg. But Karimi has made a return to 86kg and won the Takhti Cup gold.

Karimi downed former World silver Ezatollah AKBARI (IRI), 7-2 in the semifinal and earned a 6-0 victory against Hamed VAFAEIPOUR (IRI) in the final bout. But Karimi knows well that he has a big rock in front of him in the form of world champion Hassan YAZDANI (IRI) if he wants to make the national team again.

“Injuries made my way difficult and I couldn’t concentrate and train," Karimi said. "I had only two weeks training for Takhti Cup and my performance was not bad. All Iranian opponents except Yazdani competed in the Takhti Cup. I will continue my training to reach the national team spot."

Apart from the return of Karimi, the defeat of world silver medalist Alireza SARLAK (IRI) and the rise of cadet world champion 17-year-old Amirreza MASOUMI (IRI) were the highlights of the competition.

In absence of Tokyo Olympian Reza ATRI (IRI), U23 World bronze medalist Ahmad JAVAN (IRI) proved himself as the new flagbearer for Iran at the weight. He defeated Sarlak 3-2 in a thrilling final at 57kg.

Atri, who had not competed since a fifth-place finish at the Olympics, moved up a weight class and won the 61kg gold medal with a 6-2 win over Majid DASTAN (IRI).

European champion Arsen HARUTYUNYAN (ARM) was also entered at 61kg but ended with a bronze medal. 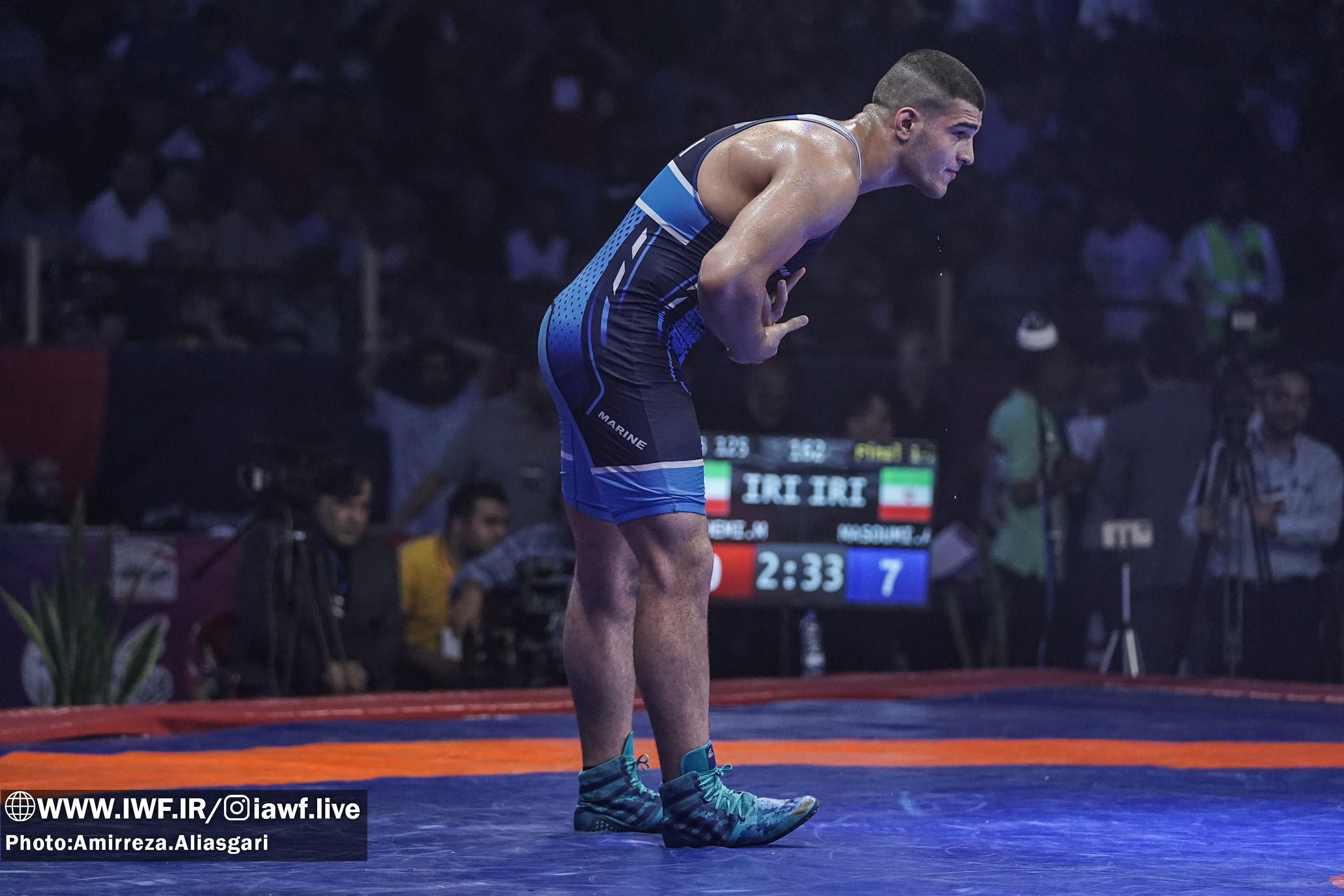 The surprise of the tournament came at 125kg when Masoumi won the gold medal with ease at the weight class and earn himself a shot at making the World Championships team.

The name Masoumi would be familiar to fans. Fardin MASOUMI (IRI) was a 2009 World silver medalist and a fifth-place finisher at the '08 Beijing Olympics.

The four-time Asian champion's son Amirreza stood by the family reputation and beat Mahdi HASHEMI (IRI) 7-0 via cautions in the final to celebrate his senior debut.

Still a junior, it was at the insistence of the coaching staff that Masoumi jumped up to the senior level.

“I am 17 and it is my first year in junior level but national team coaches decided I compete in senior level," Masoumi said. "I am very happy for the gold especially for making my father and my coach happy.” 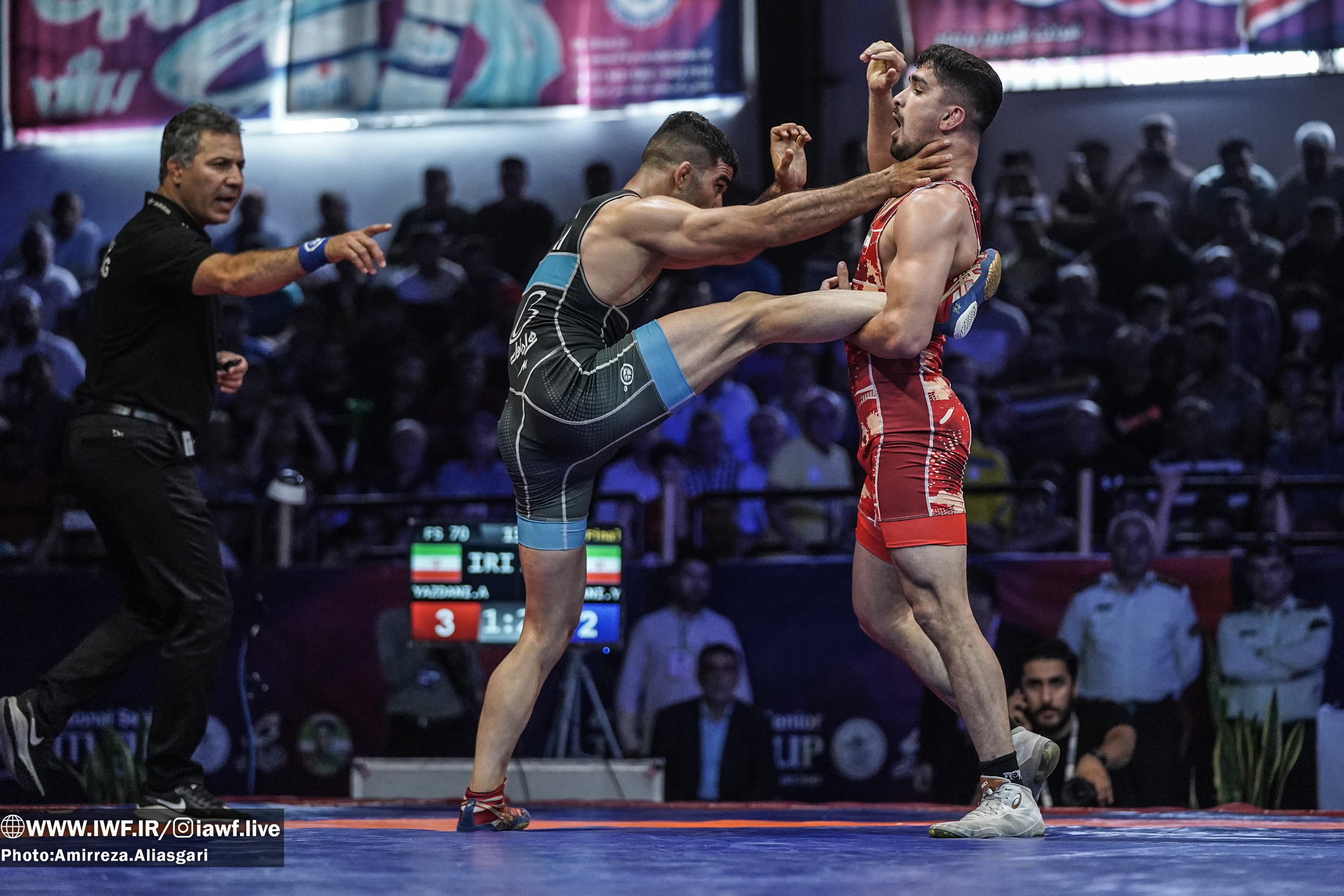 In other weight classes, Amirmohammad YAZDANI (IRI) strengthened his position at 70kg. After winning the silver medal in Oslo at 65kg, Yazdani moved up to 70kg and won gold at the Yasar Dogu Ranking Series event.

Now, the 21-year-old strengthened his position on Iran national team by winning the gold last week. He passed two Armenian wrestlers to capture the title. He first downed Narek HARUTYUNYAN (ARM) 6-0 in the semifinal and then humbled European silver medalist Arman ANDREASYAN (ARM), 3-1 in the summit clash.

“All Iranian rivals competed in Takhti Cup," Yazdani said. "My final rival was 2022 European champion [silver] and I hope these titles continue for me. I am like a soldier for the Iranian national team and we obey all decisions of the coaching board." 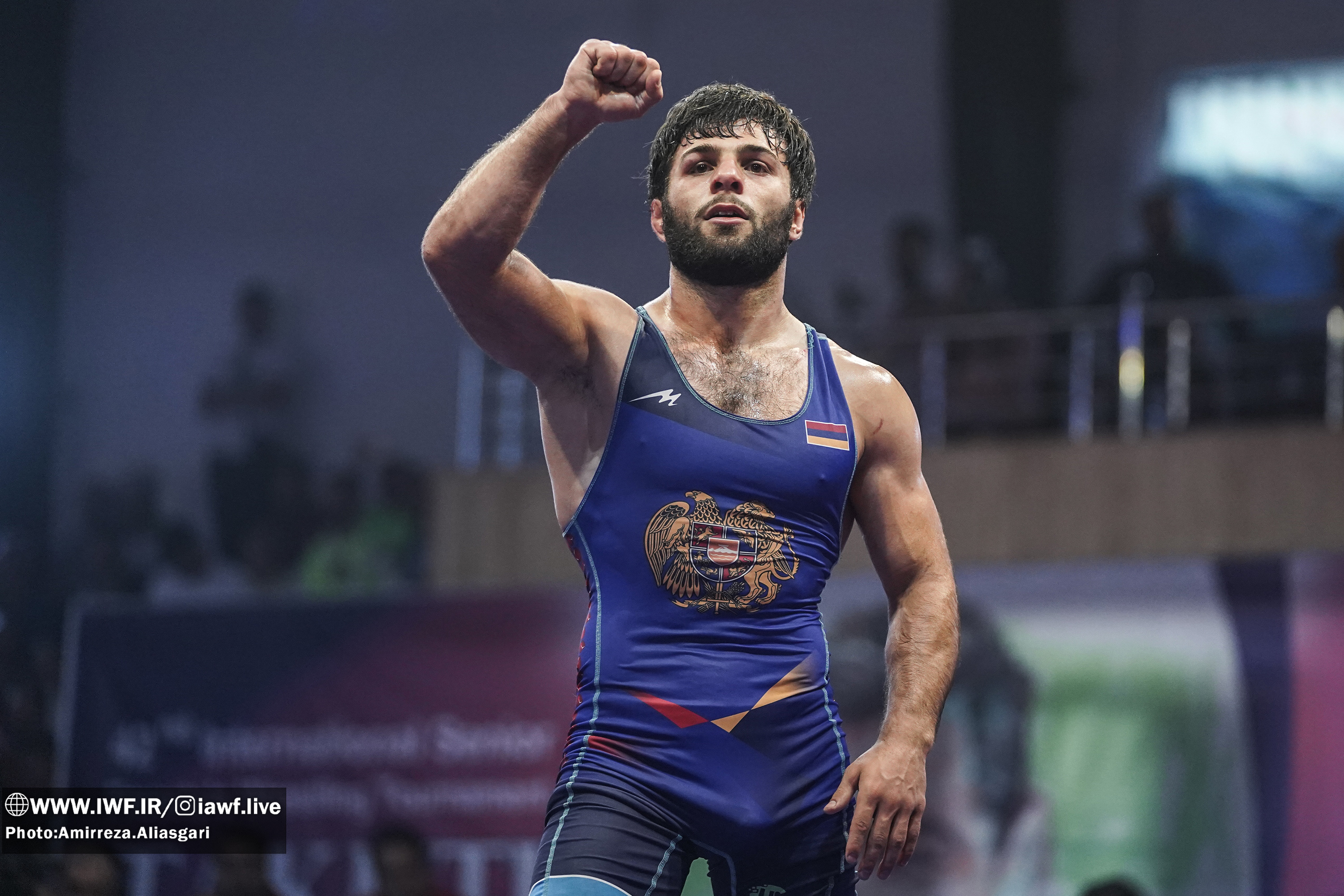 An Armenian wrestler did take home a gold medal as Vazgen TEVANYAN (ARM) became the only non-Iranian champion at 65kg. He won a high-stake final against Tokyo Olympian Morteza GHIASI (IRI) 5-3.

Iran is looking for a successor at 74kg and Mohammadsadgeh FIROUZPOUR (IRI) has so far begun well. Like his brother Amirhossein, Mohammadsadgeh is taking one step at a time. The two grabbed the junior and U23 world medals last year and are moving up to the senior level. Amirhossein won the Asian Championships gold at 92kg before winning silver at the Ranking Series event in Almaty in June at 97kg. 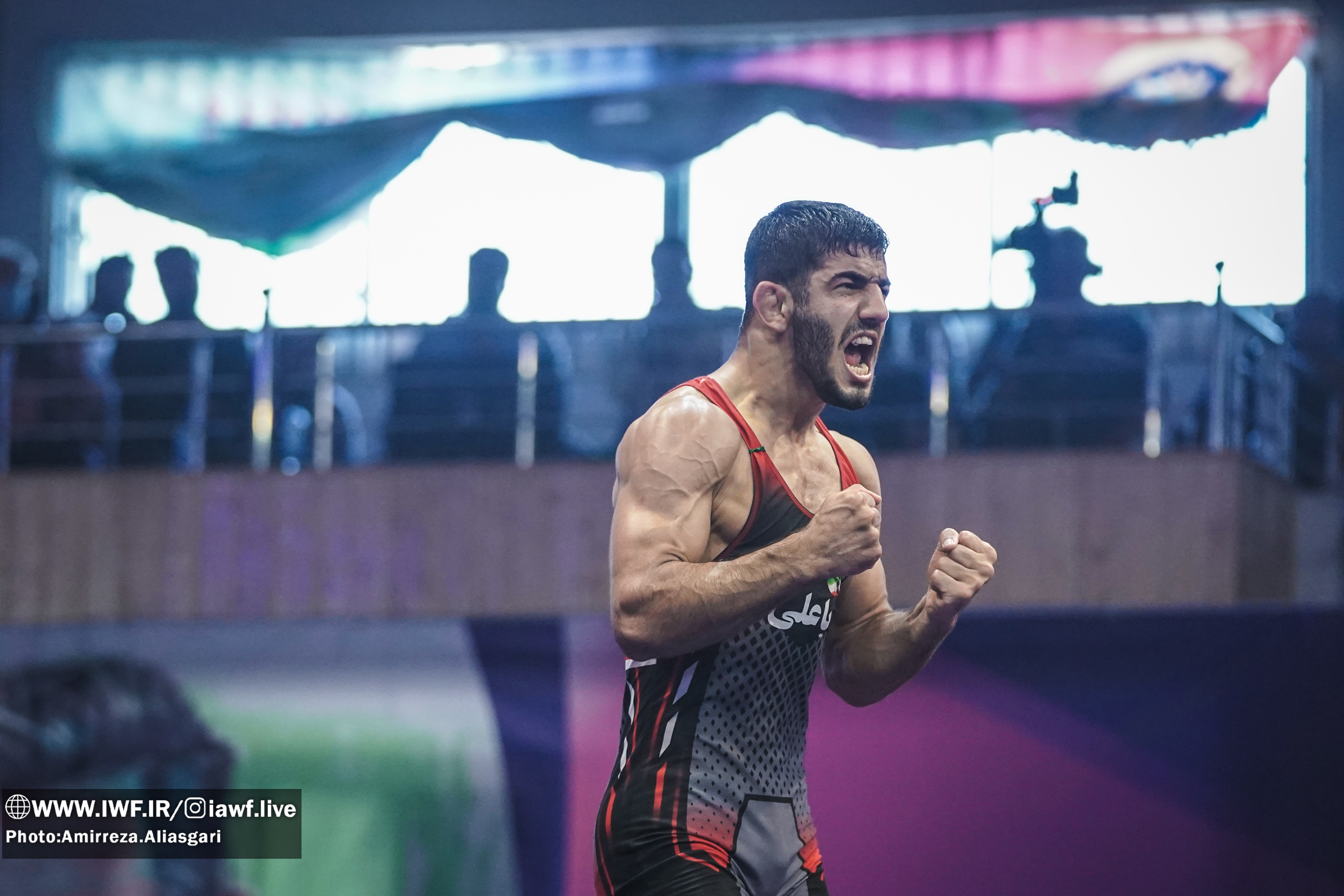 Mohammadsadegh stepped up and won the Takhti Cup gold at 74kg by defeating Hamed RASHIDI (IRI), 1-1, in a close final.

World silver medalist Mohammad NOKHODI (IRI) proved himself the favorite to attend the World Championships at 79kg. He had a dominant run at the Takhti Cup as he reached the final with ease. His only test came in the gold medal bout but he succeed to beat Mostafa GHIASI (IRI) 7-5.