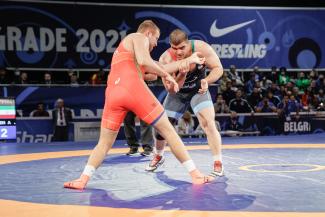 BELGRADE, Serbia (November 1) – A lot of Iran's success is built on high-paced wrestling, enabling them to break down their opponents. A combination of that pace and exceptional ground wrestling was on display as Iran sent three wrestlers to the finals of the U23 World Championships.

A month after their senior Greco-Roman team set a high bar at the Oslo World Championships, the U23 wrestlers were not far behind on the first day of the tournament in Belgrade with Tokyo Olympian Amin MIRZAZADEH (IRI) leading the way.

Wrestlers from five Greco-Roman weight classes were in action on Monday. Iran took three spots in the final, while Russia and Hungary each grabbed a pair of berths. Turkey, Armenia and Georgia complete Tuesday night's gold-medal match lineup.

Apart from Mirzazadeh at 130kg, Poya DAD MARZ (IRI) and Amin KAVIYANINEJAD (IRI) made it to the finals at 55kg and 77kg, respectively.

Kaviyaninejad was undoubtedly the day's outstanding performer, as he outscored his four opponents 33-5. The five points he conceded all came against Erkan ERGEN (TUR) in the quarterfinals. But he scripted a comeback with a series of gut-wrench after trailing by four points to win, 10-5.

In the semifinal, he was up against U23 European champion Sergei STEPANOV (RUS) in what turned out to be a one-sided affair.

The Iranian, who won a bronze medal at '17 U23 Worlds, broke the deadlock with a stepout and then was awarded a point for Stepanov's passivity. From the par-terre, he was able to roll Stepanov twice to lead 6-0.

With the match slipping away, the Russian tried a front headlock but failed to finish and Kaviyaninejad got the exposure and two points to win 8-0 and reach the finals.

With the match slipping away, the Russian tried a front headlock but failed to finish, and Kaviyaninejad got the exposure and two points to win 8-0 and reach the finals.

Tamas LEVAI (HUN) awaits Kaviyaninejad in the final as he was one of the two Hungarian wrestlers who made it to the gold medal bout.

Once again, it was Levai's defense that was the constant throughout the day. It helped him beat Dmytro VASETSKYI (UKR), 5-1, in the semifinal.

The other Amin was not so aggressive but still got the job done with a 5-1 win over Fatih BOZKURT (TUR). He began the semifinal with a big four-point throw, earned another point for Bozkurt's passivity before giving up one for his own.

He will face David OVASAPYAN (ARM) in the final, three years after they competed in the final of the Junior World Championships in Trnava, Slovakia.

Mirzazadeh came out on top in that bout, but Ovasapyan would like to avenge that loss and claim the world title this time around.

On his way to the final, Mirzazadeh defeated U23 European champion Mikhail LAPTAEV (RUS) in the highly-anticipated pre-quarterfinals.

Scoring an early stepout, Mirzazadeh gave up that lead when he was called passive. But Laptaev failed to score from par-terre, and the score remained 1-1 at the break. Then, as Mirzazadeh up the ante, the referees were forced to call Laptaev passive which restored a 2-1 lead for the Iranian, which he continued to hold despite being warned for passivity late in the second period. 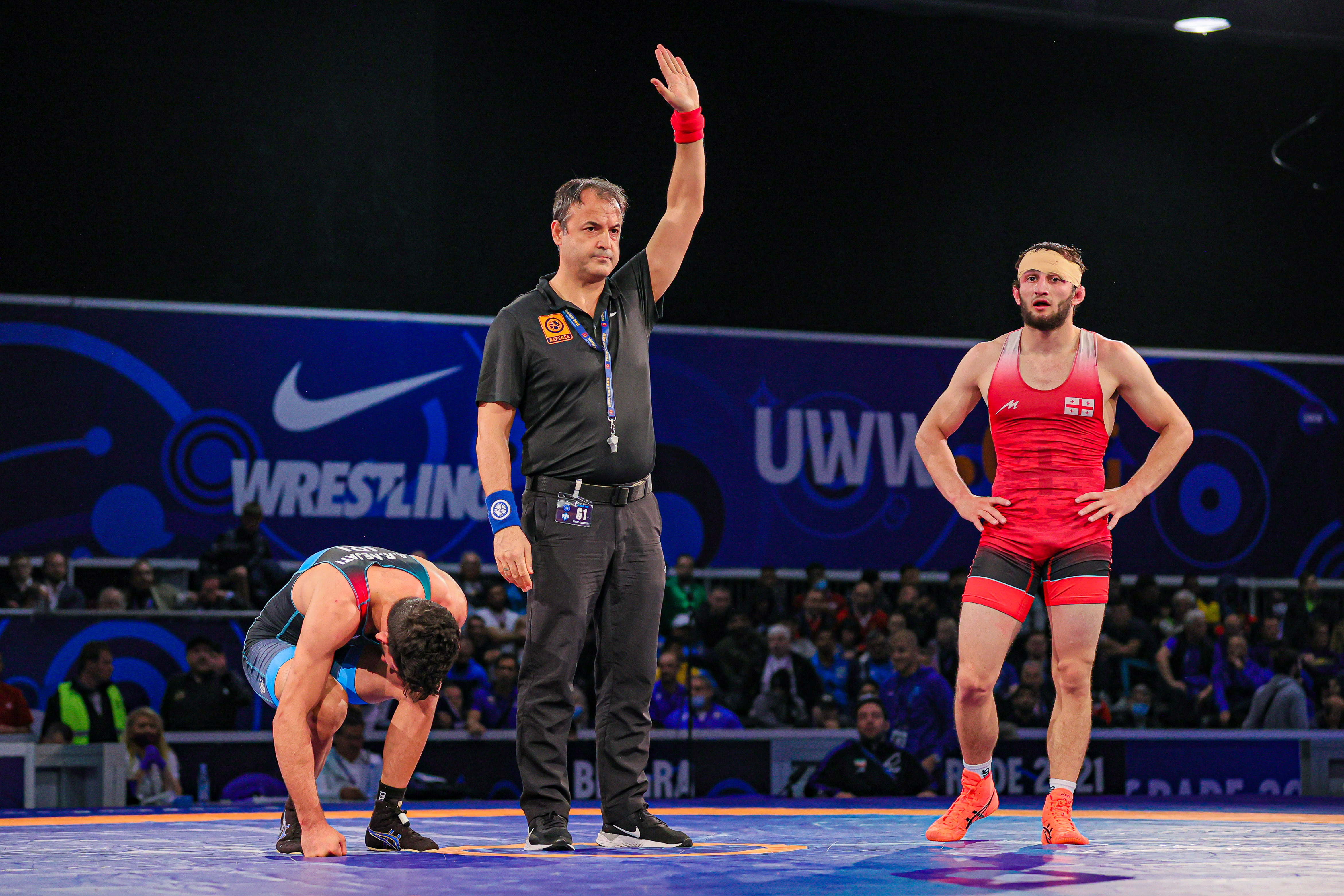 The Georgian produced a tactical bout and led 3-3 on criteria until the final seconds. Nejati made a big attempt to score via a head-over jump, but Abuladze was ready for it and slammed the Iranian on the mat for four points, winning 7-3.

Meysam DALKHANI (IRI) had stopped Abuladze from winning the gold in Oslo and that loss motivated the Georgian to win Monday.

"I was really motivated," Abuladze said. "It was kind of revenge for me because I lost to an Iranian wrestler Oslo and now I won against Iran in the semifinal, so it feels like a little revenge."

Abuladze was dominant from the start as he scored two points after Nejati was called passive to lead 3-0. A lost challenge from Georgia put Iran on board as well.

In the second period, Abuladze was called passive, but Nejati failed to score from par-terre, and the Georgian kept the 3-2 lead. He scored a stepout with eight seconds left but that was too little too late.

Abuladze will now take on Ahmet UYAR (TUR) who took no time to finish his semifinal 11-0 against Corneliu RUSU (MDA).

At 87kg, U23 European champion Aleksandr KOMAROV (RUS) survived a 7-7 scare against Temuri TCHKUASELIDZE (GEO) in a rematch from the final of the '21 U23 Euros.

Six months back, Komarov had an easy 6-1 win, but Monday, Tchkuaselidze almost pulled it off, and it was only the criteria of Komarov's four-point throw after the Georgian's that let him down.

Komarov expressed his displeasure at his performance, especially in the semifinal, which, according to him, he was lucky to win.

"I made a lot of mistakes in the semifinal," Komarov said. "I wrestled really bad. I don't know what helped me win but I was lucky that I won."

He will hope that the luck continues to shine on him as he takes on David LOSONCZI (HUN) in the 87kg final Tuesday.

Losonczi reached his first-ever World final after a 6-0 win over Szymon SZYMONOWICZ (POL) in the semifinal. 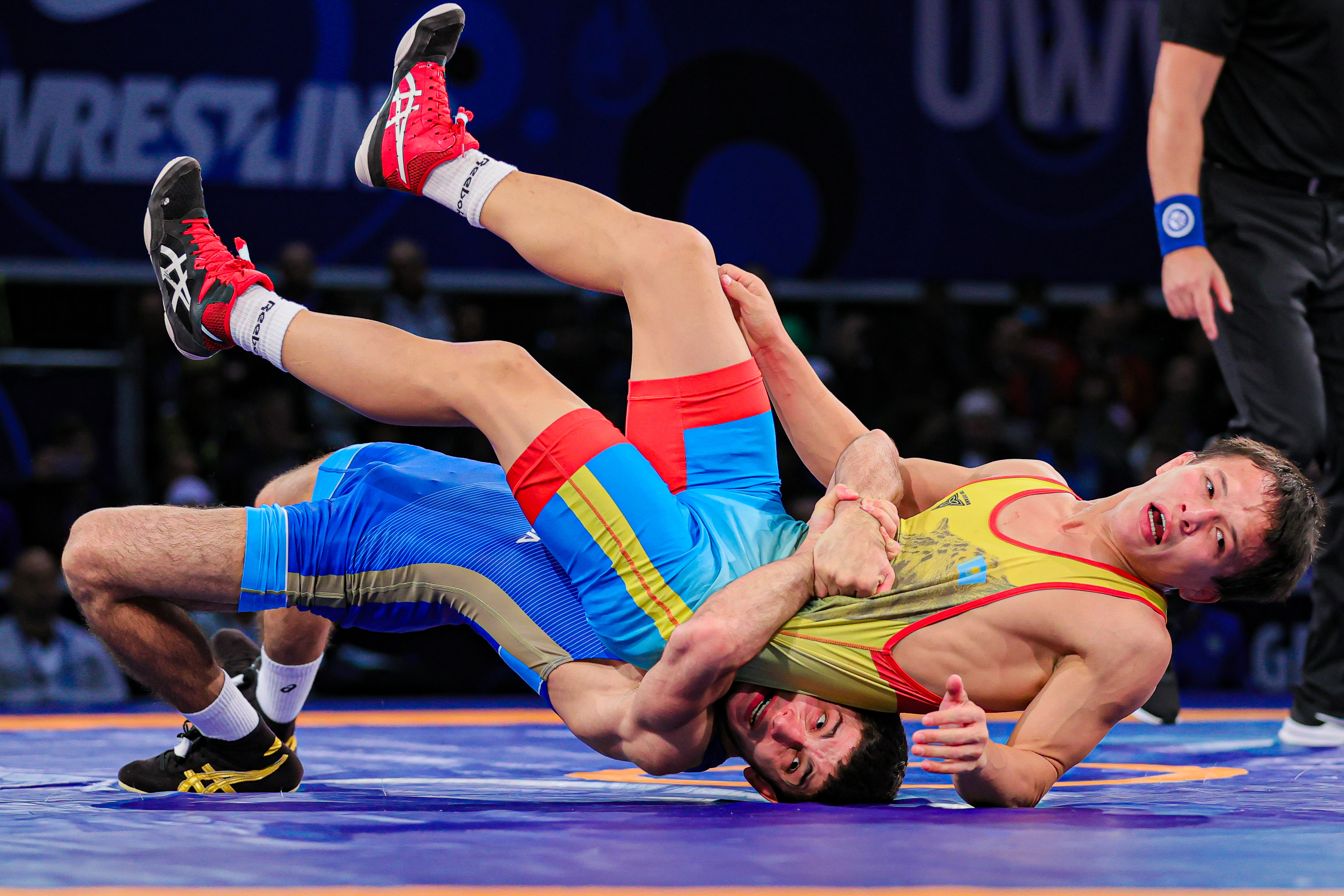 Iran and Russia will be up against each other in the 55kg final, a bout which will be huge in the context of the team title race, expected to come down between these two nations.

Mavlud RIZMANOV (RUS) will face Dad Marz in the final after a stunning performance in which he only gave up four points against the 31 he scored.

The four points resulted from a big front-headlock throw from Arslan ABDURAKHMANOV (KAZ) in the semifinal. But Rizmanov looked unfazed as he stamped his authority with a 13-4 win.

"I am happy with my wrestling today," Rizmanov said. "Hopefully, it will keep it the same way."

If it does, Dad Marz will have difficulty winning that gold medal at 55kg and the team race can tilt in favor of Russia.