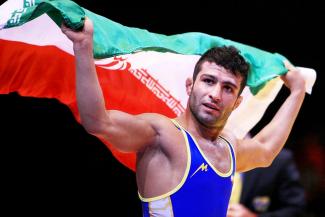 LOS ANGELES (April 9) –Defending champion Iran will be the heavy favorite in Group B when the 2015 United World Wrestling freestyle World Cup kicks off Saturday afternoon at the Forum in Los Angeles, California.

Iran defeated Russia 6-2 in last year’s gold-medal match and this year the Iranians will face Group B competition that includes World power Azerbaijan and the always-formidable nation of Belarus.

While Los Angeles remains thousands of miles from Tehran, the Iranians might feel at home as the American city is home to one of the largest Persian communities in North America. Iranian fans from across Southern California have already bought tickets in expectation of their team’s inclusion in the gold medal match on Sunday.

On the mat, the Iranian squad has a foursome of talented World and Olympic medalists leading their championships charge. Though missing a few key names, the Iranians will bring World No.2 2012 Olympic bronze medalist and 2014 World silver medalist Komeil GHASEMI (125kg) along with two-time World champion Reza YAZDANI (97kg), who ranks fourth in the world.

World No.8 Hassan RAHIMI (57kg) brings another title to the favored Iranian side, having won a 2013 World gold. World No.2 and 2014 world silver medalist Sayed Ahmad MOHAMMADI (65kg) rounds out the Iranian squad’s sterling lineup.

The Azerbaijan side will be led by 2012 Olympic gold medalist Togrul ASGAROV (70kg) and last year’s 61kg world champion Haji ALIEV, who ranks No.12 at 65kg. Two-time World bronze medalist and ninth-ranked Yabrail HASANOV (74kg) rounds out an formidable Azerbaijani lineup, one they hope can carry them past their Iranian rival.

Though not originally favored in the group, the team from Belarus brings a surprising and competitive lineup to Los Angeles. The team will be led by World No.7 and 2011 world champion Alexei SHEMAROV (125kg), 2013 and 2014 World bronze medalist Ali SHABANOV (74kg), who comes in ranked No.4, and 2014 World bronze medalist Vladislav ANDREEV (57kg), who currently sits at No.7.

World No.12 Ibragim SAIDOV (97kg), who won the respected Ivan Yarygin Grand Prix in 2015, is also expected to bring a significant contribution to Belarus’ title hunt.

Turkey brings a limited side with only ten wrestlers on the roster and will without world No.1 and defending Taha AKGUL (125kg). The Turks will be led by two-time World medalist Sezer AKGUEL (57kg), who was a 2009 World silver medalist and a 2013 World bronze medalist. Joining Akguel will be 2012 World University champion Mustafa KAYA (70kg). Kaya was fifth in the 2014 World Championship, and was a silver medalist at the 2010 Junior European Championships and is currently ranked 13th in the world.

The Turkish side is rounded out by 2014 European bronze medalist Soener DEMIRTAS at 74kg. 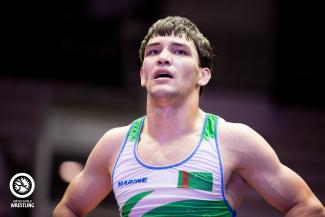 Turkmenistan’s Seydilla TAZAYEV made history Thursday night in Taipei, winning his country’s first continental gold medal since 1997, and its first-ever gold medal in Greco-Roman wrestling at the continental or world level.

The youngster had a tough road to the 60kg Greco-Roman finals, wrestling back from an early deficit in his quarterfinal and finals match. In the quarterfinals Tazayev was trailing by four points early, but came back to score 17 points on his way to a 17-10 victory.

In the finals Tzayev was trailing Keremat ABDEVALI (IRI) by three points with less than ten seconds remaining in the match, but found his way to a high dive takedown for four points and the gold medal. 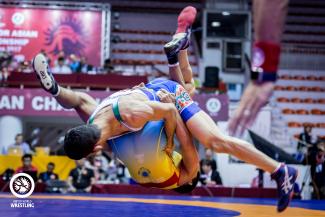 Trailing Kaviyaninejad 4-0 early in the night’s 66kg finals, Merey BEKENOV (KAZ) challenged a what would have been a match-ending four-point throw by Kaviyaninejad. The challenge was accepted and Bekenov, feeling renewed, led a spritied attack on the restart. But Kaviyaninejad would not be denied his spectacular throw -- after finding a quick takedown Kaviyaninejad immediately lifted Bekenov, repeated his original throw and took the gold medal via technical fall, 12-0.

Not to be outshined, teammate Mehdi BALIHAMZEHDEH capped an impressive performance with a five-point throw and eventual fall over Kalidin ASYKEEV (KGZ) in the 84kg gold medal finals. The Iranian champion had early pinned Ermatbek SHERMATOV (UZB) in the semifinal.

Iran’s Mohammad REZAEI (IRI) bested Zholaman SHARSHENBEKOV (KGZ), 4-4  in the 55kg finals to give his home country their first of three gold medals of the night. 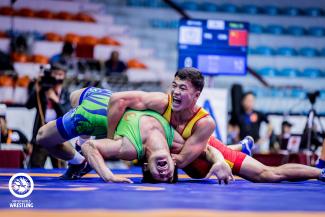 Akzhol MAKHMUDOV (KGZ) wasted no time in pinning Uzbekistan’s Jalgasbay BERDIMURATOV in the 74kg finals Thursday night in Taiwan. The most impressive wrestler on day one of wrestling in Tawian, Makhmudov’s overpowering, brutish style earned him four pins in four matches as well as the adoration of fans. 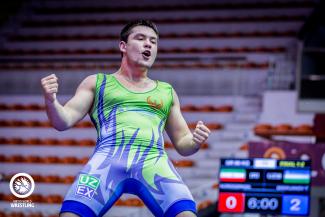