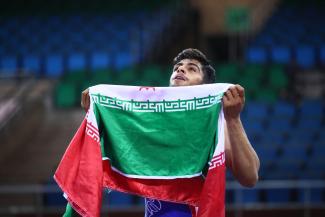 NEW DELHI, India (July 18) - Iran capped off their Greco-Roman domination at the Asian Junior Championships by picking up two gold medals on the second day of competition at the I.G. Sports Complex in New Delhi, India.

Hosein FOROUZANDEH GHOJEHBEIGLOU (IRI) and Amin KAVIYANINEJAD (IRI) were the two Iranian heroes who closed out the Greco-Roman portion of the tournament with gold medals. Both wrestlers used shutout victories to claim their second age-level continental championships.

Sajjad IMENTALABFOUMANI (IRI) was the lone Iranian who didn't make the Greco-Roman finals. Though he did not make the finals, he did save Iran’s quest for ten medals, fighting back after a heartbreaking semifinal loss to win two straight matches and seal his spot in the third-place match. In the bronze medal bout, Imentalbfoumani blanked India’s Malkit HOODA (IND), 7-0 and finished in third place.