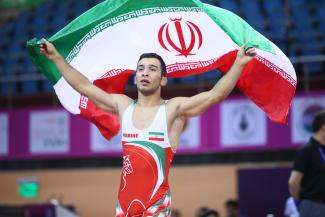 In route to his first continental championship, Naserpour outscored his opponents 24-0 while picking up three technical superiority victories.

At 63kg, Bahram MAROUFKHANI IMCHEH (IRI) hooked Iran’s second gold medal by coming out on top of the back and forth battle over Kamol KUZIEV (UZB), 7-3.

Maroufkhani Imcheh commanded the early 5-0 lead, but conceded a takedown and a step out, ending the first period with a two-point lead. The Iranian wrestler closed out the extremely slow-paced second period with a takedown, ultimately scooping up the 7-3 victory.

Amin MIRZAZADEH (IRI) capped off the first day of competition with a 2-1 win over India’s Aryan PANWAR in the 130kg finals, giving Iran their fourth gold medal of the day.