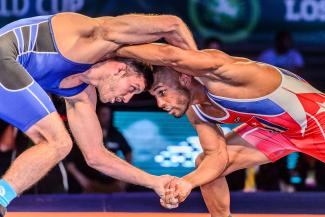 LOS ANGELES (April 11) – A pair of strong performances in Pool B by Iran and Azerbaijan on Saturday evening at the Forum in Los Angeles have the two nations ready to meet to determine what nation will wrestle for gold at the 2015 United World Wrestling Freestyle World Cup.

Iran won 15 of 16 matches, while Azerbaijan won 13 of 16 individual bouts. They teams will square off at 12:30 Pacific time to determine who will be the Pool B champion and wrestle for a World Cup title on Sunday evening.

Iran opened up with an 8-0 shut out victory over Belarus. Key victories for Iran came at 65kg, 74kg and 125kg.

The third upset, at least from a United World Wrestling rankings perspective came at 125kg as No. 10 Parviz HADI (IRI) defeated 2011 World champion and World No.7 Aleksey SHEMAROV (BLR).

Iran continued to pour it on in its second victory, a 7-1 blasting of Turkey. The Turks were bested 7-1 in the opening round by Azerbaijan and will face Belarus to determine which team will wrestle for fifth place on Sunday.

Against Turkey, Azerbaijan’s lone individual loss came at 125kg as World No.11 Jamaladdin MAGOMEDOV (AZE) was leading 8-0 early in the match before getting thrown to his back and pinned by Tanju GEMICI (TUR) at 1:33. Azerbaijan defeated Belarus 6-2 in Saturday’s final round to finish the day 2-0.

"It was good enough but not what I was expecting," said Iranian coach Dr. Rasoul Khadem, who expects Sunday's dual with Azerbaijan to be "very serious and very competitive."

In Pool A, the United States powered past a game Cuban squad 6-2 in the opening round and then got past a feisty group of Russians in a 4-4 tiebreaker win to end the day 2-0. The U.S. will face Mongolia, which split a pair of matches with Russia and Cuba in Pool A on Saturday.

Against Russia, American Tervel DLAGNEV came up big at 125kg, scoring a crucial 10-0 technical fall over Arslanbek ALIEV (RUS) to earn four classification points, which would prove to be the difference. With each team winning four of the eight bouts, the first tiebreaker came down to total classification points. With five points for a fall, four for a technical fall and three for a decision and one for scoring a point in a loss that doesn’t end in a fall, Russia led 16-13 going into 125kg.

“I haven’t wrestled for a while, so I was hungry and very excited to get back out there,” Dlagnev told USA Wrestling following the bout. “It was a lot of fun. I came out looking to attack and score points. I knew that match helped our team advance and it was great to be able to help the team. I just went out there and tried to do my best. I knew I had to tech him or pin him, and not let him score a point.”

“It went right down to the wire,” U.S. coach Bruce Burnett said. “You have some expected things and you have some unexpected things happen. When that takes place, somebody has to rise up. I’m really proud of the team. Everybody on the team competed hard, top to bottom.”

The group of young Russians isn’t likely to represent their nation in Las Vegas at the 2015 World Championships, but despite not being ranked No.1 in their nation, the squad featured five World-ranked wrestlers.

“Considering everything, I am happy. I feel like the Americans won that meeting. They scored more points, and in the end, the rules determined the winner. Our guys did a good job. I am confident they can make the big moves,” said Russian coach Christakis Alexandridis.

“They are not our No. 1 team, more like numbers two and three. But they’ve done very well. None of them will be on the World Championship team.  We have stronger wrestlers back in Russia.”

While their might be “stronger” wrestlers back in Russia, World No. 13 Yuri BELONOVSKY (RUS) earned a crucial 4-0 victory over 2012 Olympic champion Jake VARNER (USA) to put the Russian contingent in a position to upend the Americans.

“I have tremendous respect for Jake; he is a great opponent,” said Belonovsky. “But wrestling is a sport and anything can happen. The match was grueling and a challenge.  I was really happy with my technical work and my physicality.”

One match prior to Belonovsky’s win, Dauren KURUGLIEV pinned American Ed RUTH in just under a minute.

“We are well-prepared for the tournament,” said Kurugliev. “The spectators were really getting behind Ruth and it really pumped me up.  I wanted to show them a great performance and I did.” 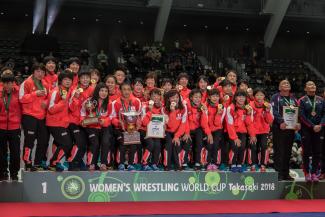 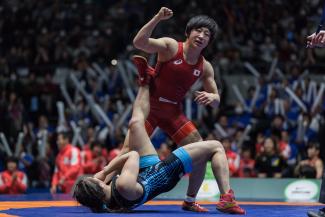