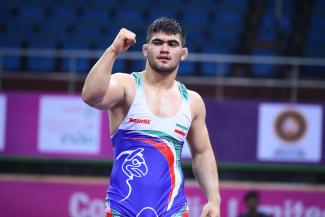 Iran was matched-up head-to-head with the host nation, India, in two of their three gold medal bouts and came out on top in both matches.

Amirhossein KAVOUSI (IRI), one of three Iranian wrestlers to claim gold medals on the opening day of freestyle action at the Asian Junior Championships. (Photo by Sachiko Hotaka)

Kavousi found himself in a 4-0 hole after giving up a chest wrap but continued to chip away at the deficit, racking up three step outs in a row and closing Kaliramana’s lead to a single point.

The Asian cadet runner-up gained his first lead of the match (5-4) with 90 seconds left, plopping Kaliramana to his butt from a head outside single leg. The Iranian wrestler tacked on two additional points from an exposure but fell behind on criteria after the Indian wrestler’s three-point reversal and gut wrench sequence.

Kavousi broke the tie, shooting a deep double to earn the go-ahead step out point, taking the 8-7 lead. He closed the bout out with a takedown from Kaliramana’s failed open shot attempt, winning the match 10-7.

Sajjad GHOLAMI (IRI) only needed 60-seconds to pick up the technical superiority in the finals. (Photo by Sachiko Hotaka)

Gholami used a counter-offensive single leg to pick up the first takedown of the bout, immediately rolling into four leg laces for the 10-0 technical superiority win.

Sajad AZIZI (IRI) cruised to his first continental championships with a 6-1 victory in the finals. (Photo by Sachiko Hotaka)

Sajad AZIZI (IRI) claimed Iran’s third gold medal of the day with his workmanlike performance against Serik BAKYTKHANOV (KAZ) in the 97kg finals.

Azizi’s relaxed demeanor didn’t change throughout the six-minute gold-medal bout. He commanded a 4-0 lead after a failed challenge, an activity clock point, and two step-outs.

With 90 seconds left, Azizi picked up the match's only takedown when Bakytkhanov got stuck underneath while trying a duck under. This gave the Iranian the gold medal and the 6-1 win.