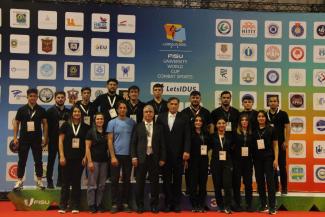 SAMSUN, Turkey (October 3) -- Introduction to Refereeing Course was held from September 23 to 27, 2022 in Samsun, Turkey on the sidelines of the FISU University World Cup Combat Sports.

The course, held with the collaboration of FISU for the first time, was supported by the Turkish University and the national federation. It was conducted by UWW Educator, Levent SEN.

The first purpose of this course was to bring the young student-athletes, who gave up wrestling at a young age, back to the wrestling family. A total of 16 university students [10 men and six women] attended the course.

After the course, Eder said that FISU emphasizes collaborations with the international federation and the course is a good chance for the former athletes to turn and serve their sport in a different aspect. He also thanked UWW President Nenad LALOVIC for giving this opportunity to the students.

TUSF President Gunay said he is very happy to be involved and facilitate such a course and will always provide support to improve wrestling at the university level.

During the course, both the theory and practice were conducted with presentations to depict all things refereeing. In the practical session, every trainee had one minute for refereeing. Their performance was video recorded and the UWW Educator reviewed their refereeing mechanism and gave his assessments for the same.

The trainees also had the chance to feel the atmosphere of competition as all of them attended the FISU World Cups competition from September 26 to 30. They were the referee candidates for two days.

All 16 of them were present to analyze the weigh-in procedure of the competition, the meeting of the referees before the bouts and the bout itself. They also got the experience of sitting next to the timekeeper and working as a timekeeper.

Other activities included drawings by the trainees of what a referee looks like, making a house of cards using only one hand inside the time limit which was 10 minutes and four different puzzles [for every group one puzzle].

The goal of these activities was to improve team coordination and find solutions when faced with problems.

To work on mechanics, a mirror activity was conducted with one person walking around and others who must do exactly what he does -- hold a whistle, change levels, score points, start using a whistle and likewise.

Finally, a shadow game during the practical session included a trainee practicing refereeing on the mat without wrestlers to imagine the situation that can arise during the bout.