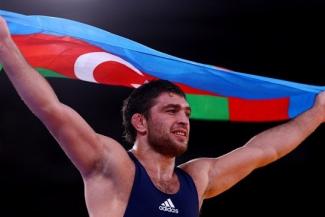 As the 2013 calendar year draws to a close, it brings with it the final tournament in FILA's Golden Grand Prix series. From November 22-24 and for the thirty-fifth year in a row, Azerbaijan's capital of Baku will play host to the Heydar Aliev Memorial Invitation.

Starting on Friday, over two hundred of the worlds best wrestler's from thirty-five countries will descend on Baku's Sarhadchi Sports Olympic Center to compete in Olympic wrestling's three styles. Well over $300,000 (American) will be awarded to medalists: $10,000 for gold, 5,000 for silver and $2000 for each Bronze.

Last year's tournament featured a star studded retinue of distinguished international wrestlers competing in weight classes so tough that even the world's very best were not safe from defeat. Fourteen Senior-level world medalists from ten different countries earned medals in the 2012 tournament.

This year's grand prix will enjoy strong participation from a wide array of the world's very best wrestling nations. Russia is sending a staggering 34 wrestlers across its southern border into Azerbaijan, with 21 in men's freestyle alone. 2012 Olympic gold medalist at 72kg, Natalia Vorobyov, will lead their women's freestyle efforts, while in men's freestyle expect to see 55kg wrestler Nariman Israpilov return to defend his title. Israpilov has enjoyed a career year with a national championship and bronze medal in the Senior World Championships.

Home country Azerbaijan will send a total of 56 wrestlers across all three styles to this year's tournament. The size of their contingent is massive, and it should be expected to perform at a high level. At last year's Grand Prix, Azerbaijan's Greco-Roman team claimed three gold medals with Orhan Ahmadov at 55kg, Kamran Mammadov at 60kg, and Shalva Gababadze at 96kg. Gababadze won a bronze medal in this year's world championships.

Sharif Sharifov, a 2012 Olympic gold medalist in freestyle at 84kg will be wrestling up at 96kg – his new weight.

Fourteen wrestlers from the United States will take the mat. Fresh off fifth place finishes at the 2013 Senior World Championships, Angel Escobedo and Spenser Mango will spearhead the American effort in men's freestyle and Greco-Roman respectively. The American women's team features world champion Elena Pirozhkova at 63kg. The USA earned a pair of medals in last year's grand prix.

The United States is expecting to test their backup 74kg wrestler Kyle Dake against his toughest field yet. The young wrestler placed second at the US Nationals to undefeated Olympic and world champion Jordan Burroughs.

Japan's stellar women's freestyle team, which put on an impressive display at last year's grand prix, will send a wrestler at all seven weights. Japan dominated last year's women's tournament, winning more than half of the available gold medals and three additional bronze medals. Claiming one of these bronze medals was 2013 world bronze-medalist Sara Dosho at 67kg.

The reigning team champion in men's freestyle, Iran, will have nine wrestlers in attendance this weekend, two in men's freestyle along with a full lineup in Greco-Roman. Additionally, traditional powers Turkey and Georgia will send over 20 male wrestlers a piece, including 15 a piece in Greco-Roman. Georgia collected two men's freestyle gold medals in last year's grand prix, among them Giorgi Sakandelidze at 120kg. Sakandelidze, interestingly, is a past world silver medalist in FILA's beach wrestling competition.

Along with the long-standing wrestling powers, fans should keep an eye on the Puerto Rican contingent of wrestlers. Though they send only three athletes, these three are likely to include 60kg 2011 world silver medalist Franklin Gomez and 84kg 2012 Olympic silver medalist Jaime Espinal.

Hungary, which hosted the 2013 world championships where it represented itself well in Greco-Roman competition will have five Greco-Roman wrestlers in this week's tournament. Hungary saw three of its wrestlers win gold medals in Greco-Roman at last year's grand prix, among them world medalist Viktor Lorincz at 84kg.

The 2013 Heydar Aliev Grand Prix will also enjoy strong participation from Ukraine and Kazakhstan. Kazakhstan was able to place a men's freestyle wrestler at the top of the podium at last year's Grand Prix with world bronze-medalist Dauren Zhumagaziev at 66kg, and will look to replicate that success this year.

All told, this year's Heydar Aliev Grand Prix, will feature a field of 284 wrestlers from four different continents. Day one, November 22, will hold competition in Greco-Roman, day two will feature women's freestyle and the final day, Sunday, November 24, will see the men compete in freestyle. The Azerbaijan state sports channel will provide television broadcast for all three days of action.

To watch the competition in live streaming, please follow the links bellow.

PS: Viewers will need a free Livestream account to watch.