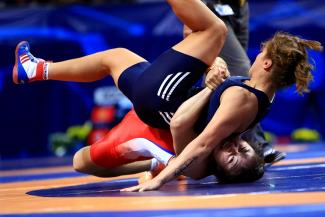 Herhel, coming in at No.3, defeated defending world champion SUKHEE Tserenchimed (MGL) for the title at 60kg while Soronzonbold emerged from a free-for-all for the title, climbing from No.8 to the top of the rankings at 63kg. 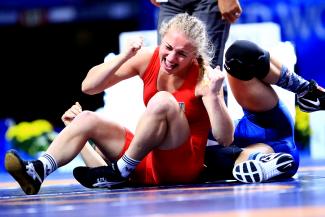 Herhel took advantage of the defections from the non-Olympic category of 60kg to claim the top spot with her first world title, while Soronzonbold had to swat away Olympic hopefuls in each round – including Taybe YUSEIN (BUL), previously top-ranked at 60kg.

London 2012 bronze medalist Soronzonbold tagged Yusein with a technical fall in the semifinals at 63kg and then wrapped up two-time junior world champ Risako KAWAI (JPN) for a quick fall in the final.

In the other six weight categories, the top-ranked wrestlers, including four defending world champions, all emerged victories. 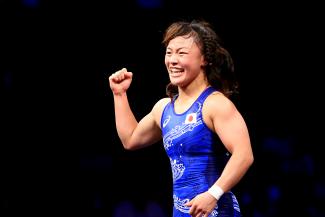 Japan’s trio of world champions – Eri TOSAKA (48kg), Saori YOSHIDA (53kg) and Kaori ICHO (58kg) – completed their hat-trick for a third year in a row, while Adeline GRAY (USA) and Helen MAROULIS (USA) won a pair of the home team at 75kg and 55kg, respectively.

Surprisingly, London 2012 gold medalist Natalia VOROBIEVA (RUS) won only her first senior world title at 69kg – even though she had also been the favorite to win in 2013 and 2014.

European Games champion Valeria LAZINSKAYA (RUS), however, coming to the world meet top-ranked at 63kg, lost by fall in her opening bout with Yusein and tumbled all the way to 24th in the final results – and a No.8 in the rankings.

Among the other surprises in the Olympic weight categories, Jessica BLASZKA (NED) at 48kg along with JONG Myong-Suk (PRK) and Odunayo ADEKUOROYE (NGR) at 53kg went from unranked to bronze medals and qualified their countries for Rio 2016.

The top six wrestlers in each weight category at the world championships were automatically awarded the top six positions in this month’s rankings. The rankings for No.7 to No.20 were determined, in part, by a wrestler’s performance in Las Vegas along with results in competition throughout 2015.

48kg – Jessica BLASZKA (NED) stormed back from an early loss to European Games champion Mariya STADNYK (AZE) with three wins in repechage for her first-ever world championship medal and a berth at the Rio 2016 Olympic Games.

53kg – Sofia MATTSSON (SWE) notched falls in all four of her bouts leading to the championship final, outscoring opponents 24-4, but had to settle for her third straight silver medal against 13-time world champion Saori YOSHIDA (JPN).

55kg – European Games bronze medalist Evelina NIKOLOVA (BUL) grabbed another bronze for her collection at the world championships, notching falls in three of her four bouts despite being outscored 13-23. In 2015, Nikolova reached the medals podium six times – four times to receive bronze medals.

With the exodus of some wrestlers to the Olympic weight categories of 58kg and 63kg, eight previously unranked wrestlers break into this month’s top 20, including Oceania champion Tayla FORD (NZL).

63kg – SORONZONBOLD Battsetseg (MGL), who won her first world title in 2010, wrapped up two-time junior world champ Risako KAWAI (JPN) for her second crown and her first trip to the top of the international rankings.

Defending champion Yulia TKACH (UKR) fell to Kawai in her first bout, but ripped through the consolation bracket with three wins for a bronze medal and No.3 in the rankings.

75kg – Adeline GRAY (USA) completed an unbeaten romp through 2015 for her third world title while keeping a firm grip on the top position in the rankings.

European Games champion Vasilisa MARZALIUK (BLR), meanwhile, shook off an early loss to Gray and forged three wins in the consolation bracket for a bronze medal.