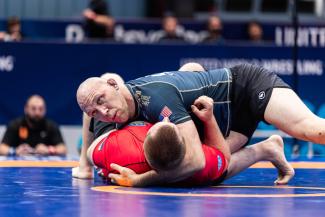 PONTEVEDRA, Spain (October 18) -- Over the years, John HANSEN (USA) has been to United World Wrestling's Grappling World Championships with an aim to win the gold. But until 2022, he failed to achieve that.

But in Pontevedra, Spain, Hansen became the Grappling world champion in 130kg with a dominant run at the World Championships. Out of his four wins, two were by submission and the others were a testimony of how dominant Hansen is in Grappling.

Like Ivan SNIHUR (UKR) realized in the final when Hansen scored two points by bringing him down before adding three points for his control. Even as Snihur tried to escape out of the control, Hansen kept the offense going, adding two four-point movements before ultimately winning by submission with 1:42 remaining on the clock.

In the semifinal against Ioannis KARGIOTAKIS (GRE), he allowed his opponent to be on top before reversing the position and taking control for a 5-2 lead. He won that bout 5-3.

Overall, Hansen expressed his satisfaction by not just winning the tournament but also how his team was able to win the team title.

"I am very satisfied," Hansen said. "The USA won the Grappling team title for the first time and I am very proud of that. Such an incredible experience to be part of like the gold-winning team. I wanted to win the gold but ran into a good opponent in 2019 and could not get it done last year either. This is a huge accomplishment. I have wanted this for a long time."

Out of the six finals, the USA reached finals with Richard ALARCON (USA) and Kevin CRANE (USA) joining Hansen as the world champion while Brady WICKLUND (USA) and Paul ARDILA (USA) finished with silver medals.

"The group has been coming together over the last couple of years," Hansen said. "We have been recruiting collegiate wrestlers and a lot of guys in their 20s."

The major reason Hansen believes in the success of the USA at the UWW World Championships is the advantage it gives to wrestlers and the various countries it brings together.

"The UWW rule set prioritizes wrestling as it should be," he said. "Like if I pull guard, I should be penalized two. That's great for wrestling and records it fairly. I don't think wrestlers should be allowed to sit down. That's why I love UWW. There are more countries [at these World Championships]. How many other events draw that much talent from other countries? It's really cool. To let our guys know in the USA, this is the real World Championships."

Hansen has been one of the biggest names in Grappling and even at the age of 40 years, he participates around the world. With more understanding of the sport than he first began at the UWW tournaments, Hansen said it is one of the biggest competitions out there.

"If you take a UWW grappler with a high-pace rule set, he will wrestle 10 minutes easily. Other grapplers coming to UWW will be called for stalling. UWW grappler will go challenging anywhere."

While Pontevedra saw grapplers from Japan, India and Angola apart from the dominant grappling countries, Hansen hopes the variety continues at future tournaments, an important step to growing the sport.

"Australia is there [to grow]," he said. "Their style is very action-oriented and very aggressive which is perfect for UWW. When I saw it first, I was like why is someone called passive when you are mounted?

"But Australia and Japan are the teams. The grapplers from eastern Europe are also top. They are good on top, good at the bottom, and good in wrestling. UWW rule set is what people in eastern Europe play and that sets them apart. If they come to other rule sets competition, they will not take much time to adapt. Another country is Canada. They won't take to come up. Argentina will be out as well."

Though he has not his calendar set for next year, Hansen believes that the World Championships will always be on his schedule.

"As long as I can keep my spot in the USA, I will be at every UWW Worlds until somebody takes it from me," he said. "There is a legit commodity with 30 countries showing up. This is a completely different experience." 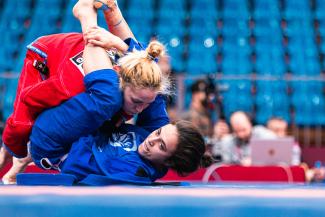 CORSIER-SUR-VEVEY (Switzerland) -- The 2023 Grappling World Championships will be held in Warsaw, Poland.

The United World Wrestling awarded the tournament to the Poland capital which will host it from August 21 to 24 after the wrestling U20 World Championships which runs from August 14 to 20.

Grappling is one of UWW's fastest-growing styles, with events and participation numbers growing each year. The 2022 edition in Pontevedra, Spain saw grapplers from more than 30 countries.

It is one of the top events on the calendar for combat sports and will host grapplers from around the world.

Grappling, formerly organized by UWW’s Associated Styles office in Istanbul, Turkey, has been brought back to UWW Headquarters in Switzerland with hopes of progressing the sport to the next level.

For the full list of events on the Grappling calendar and all other styles can be accessed at uww.org/events.