TAMPERE, Finland (August 1) – Mark HALL (USA) capped the defense of his world title with his best match of the day, pinning challenger Isa SHAPIEV (UZB) in the 74kg freestyle final Tuesday, the opening day of the Junior Wrestling World Championships.

After a few offensive struggles in the morning session, Hall uncorked his finest for the gold medal bout, cranking Asian junior silver medalist Shapiev over with a front headlock and converting to a half-nelson and body press in midair to complete the fall at 0:50 of the first period.

“I had some troubles offensively in the morning, but defensively I felt great,” Hall said. Asked about saving his best match for the final, Hall responded “I didn’t plan it that way, but I’ll take it.”

As for winning his second title, the double champion said that last year’s triumph in Macon (FRA) was “fulfilling” after a ninth-place finish in 2015.

“This year was a just as good,” Hall said, adding “But, this year we’re focusing on a team title. We have a great team and as one of the older wrestlers, I guess I’m kind of a leader for the guys.”

With Hall’s victory, the United States freestyle squad grabbed a share of the first-day lead in the team standings with 30 points. Russia also has 30 points and enjoys the tie-break advantage with two gold medalists. 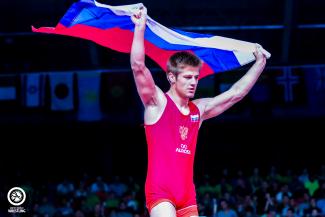 Russia received gold medal efforts from Abdula AKHMEDOV (60kg), who wrapped up Mitchell McKEE (USA) by fall in the 60kg final, and Shamil MUSAEV (96), who stopped a bid by European junior and under-23 champion Givi MATCHARASHVILI (GEO) for his third age-group title of the year at 96kg.

In addition to Hall and McKee, the U.S. also got a bronze medal from Kollin MOORE (96kg).

Meanwhile, in the bronze medal matches at 74kg, Veer Dev GULIA (IND) overcame a 2-5 deficit to Yajuro YAMASAKI (JPN) with a late rally for an 8-5 win. Mottaghinia scored a  takedown midway through the first period and converted with a cross-ankle lock-and-turn for an 11-0 technical fall over Muhammet KUCUKYILDIRIM (TUR).

At 60kg, European bronze medalist Akhmedov dumped McKee to his back with an arm-and-leg throw (fireman’s carry), then wrapped his opponent up with a cross-knee lock for the fall at 1:00 and the gold medal.

In the bronze medal bouts, Asian silver medalist Yones EMAMICHOGHAEI (IRI) fashioned a technical fall over Eriglent PRIZRENI (ALB), capping his victory with a takedown and gut wrench. Hiromi SAKAKI (JPN) opened with a pair of double-leg attacks against Ravinder RAVINDER (IND) and then added a series of step-out points for a 9-6 win. 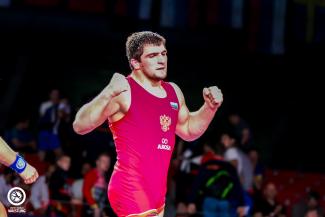 In the bronze medal matches at 96kg, Moore broke open a hard-fought match with a double-leg and gut wrench in the first 15 seconds of the second period and secured the 11-0 technical fall over Ilja MATUHIN (GER). Ibrahim CIFTCI (TUR) took a 4-0 lead with a takedown at the end of the first period and added a late go-behind for a 7-0 win over Sargis HOVSEPYAN (ARM). 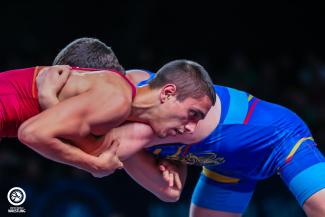 At 50kg, Shahin MUKHTAROV (AZE) spotted European bronze medalist Karen ZURABYAN (ARM) a passivity point in the first period but came back with a duck-under takedown and gut wrench for a 4-1 lead at intermission. The European silver medalist then cruised to a 7-5 win as both wrestlers moved up one place on the junior world medals podium.

In the bronze medal bouts, 2016 Asian cadet bronze medalist Akbar KENZHEBEK ULUU (KGZ) came out of a late scramble with Aslan MINKAILOV (RUS) for the fall at 5:50. Asian junior champion NARMANDAKH Nasanbuyan (MGL) defeated Rakhat KALZHAN (KAZ), 6-2, with the help of takedowns in each period.

Championship wrestling continues Wednesday at Tampere Exhibition and Sport Center with action in freestyle at 55kg, 66kg, 84kg and 120kg.