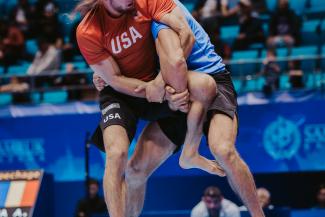 NUR-SULTAN, Kazakhstan (Sept. 23 and 24) --- Athletes from 18 nations made the trip to Kazakhstan to claim individual and team world titles in No-Gi Grappling and Grappling Gi styles. The competition took place in Bary’s Arena following the Greco Roman, Women’s Wrestling and the Freestyle Wrestling World Championships. This was the second year in which Kazakhstan played host to No-gi Grappling and Grappling Gi world championships. These events are part of the lead up to Nur-Sultan hosting the 2021 World Combat Games which the Grappling styles will be a participant.

In the 62KG division, Anthony Guy DE OLIVEIRA (FRA) caught the attention of many with his positional and submission expertise. Winning his first qualification match 7-0, he then scored submission victories in the Quarter and Semi-Finals to advance to a finals match showdown with Magomedbek TEMEEV (RUS). After a brief exchange on the feet, DE OLIVEIRA (FRA) pulled guard giving TEMEEV (RUS) a 2-0 lead. After defending some aggressive guard passing from the Russian, DE OLIVEIRA (FRA) was able to sweep to bring the score to 2-2. With time running short DE OLIVEIRA (FRA), was awarded 1 point for a leg lock attempt. 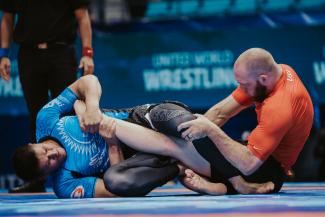 Dmytro Baranov (UKR) was another highlight reel at 62KG and would go on to take home a bronze medal. After falling short in the opening round against DE OLIVEIRA (FRA) in a rematch of this year's European Finals. Baranov (UKR) would score two exciting submission victories to land his spot on the podium.

Gairbeg IBRAGIMOV (RUS) capped off a dominant run at Men’s No-gi Grappling 71KG with a 15-0 technical decision in the Finals match. He used a variety of takedowns and guard passes to overwhelm his opponent. He scored submission victories over opponents from Georgia and USA on Day 1 to reach the finals.

Team Russia once again proved their dominance, putting a finalist in all 8 final’s matches. They walked away with 7 golds and 1 silver as well as the team title. Team USA advanced 4 members to medal matches with Carlos SOTO walking away with the only medal, a silver at 92KG 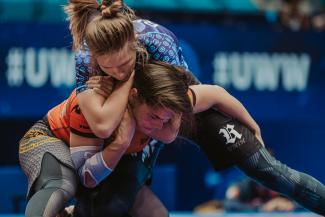 Rimma ANUFRIEVA TROPINA (RUS) claimed her world championship title at 71KG in a come from behind victory. She trailed Magdalena Zofia LOSKA (POL) most of the match until LOSKA (POL) attacked a toe-hold. TROPINA (RUS) defended well and scrambled out and snatched up her own submission. Forcing her opponent to tap to a kneebar with less than 30 seconds remaining.

Russia once again lead all teams with 3 team members landing in the finals. Ukraine came second with 2 members in finals matches. Team France walked away with its 2nd gold medal No-gi Grappling with Claire France THEVENON’s gold medal at +71KG

Anthony Guy DE OLIVEIRA (FRA) once again secured gold this time in Men’s Grappling Gi at 62KG. He faced off against Dmytro Baranov (UKR). Baranov (UKR) had defeated him in the finals of this year's European Championship. Tied 2-2 with 3 minutes remaining in the match, DE OLIVEIRA (FRA) hit a slick backstep pass to go-ahead 5-2.  He worked his way to the back control and finished a choke to win his 2nd gold medal of the day. Also at 62KG, hometown favorite Vladislav MUKHORTOV (KAZ) bounced back from a Quarterfinal’s points loss to submit his opponent in the bronze medal match.

Team Russian again advanced the most competitors to finals matches with 5, followed by team Poland with 3.  Abdurahmanhaji MURTAZALIEV made sure Kyrgyzstan walked away with gold when he submitted his opponent in the 84KG final 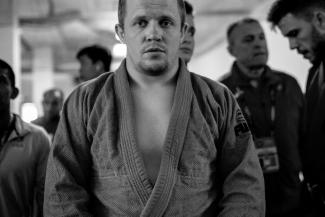 Meshi ROSENFELD (ISR) advanced past Irina GROMOVA (RUS) to win her 2nd gold medal of the day at 64KG.  ROSENFELD (ISR) pulled guard at the start of the match giving GROMOVA (RUS) the 2-0 lead. Using a slick back take from the spider-guard ROSENFELD (ISR) took a 6-4 lead. She locked in a choke and it looked as though the match would end there.  GROMOVA (RUS) displayed her toughness as she worked her way out and brought the score to 7-4. Time would run out there in an exciting finals match. 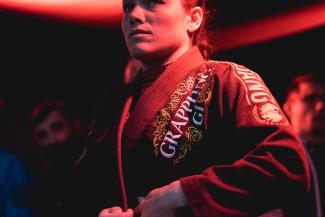 Bucharest, Romania (April 6th) –After an action-filled first day of No-Gi Grappling yesterday, the athletes put on the Gi and tied their belts for action in Grappling. Day 2 was just as good, athletes showcased their adaptability and utilized the Gi to the fullest to tangle up their opponents with sweeps from the guard and chokes from all positions and every angle.

World silver medalist in 2018 and veteran of the 62KG division, Dmytro BARANOV (UKR) came better prepared than ever to this year's European edition. BARANOV (UKR) won 3 matches on his way to the final including a redemption match against France’s Anthony DE OLIVEIRA who defeated him in the final of No-GI yesterday. In the finals against Akhmed Zulpukarovitch MAGOMEDOV (RUS), his veteran's experience proved the difference, winning the match 5-5 ( criteria).

Khachbar KHACHILAEV (RUS) aggression and takedown oriented game were too much for his opponents over the course of both days. At +100KG this explosive athlete was all over his opponents winning gold in both styles. In the final of Grappling, Abdel Hakim DJABALI (FRA) was a game opponent but fell short 5-2.

One gold medal was not enough for Svitlana SKRYPNYK (UKR). After winning big yesterday she followed up with an equally impressive performance in the Gi. Taking on 4 opponents on her way to the finals, SKRYPNYK (UKR) defeated all including the bronze medal winner in No-Gi Anzhelika PEKH (RUS). In the finals match  Polina KRUPSKAIA (RUS) proved to be her toughest test of the day. After an early back take to score 4 points, SKRYPNKY (UKR) was forced to make use of her skilled guard retention to hold off the surging Russian. The 4 points was just enough for the win and with it the title 53KG.

Next up for Grappling and Grappling No-GI will be the Pan-American Games in Buenos Aires, Argentina on  April 15th and 16th. Make sure to catch it all on United World Wrestling.