ACAPULCO, Mexico (May 6) -- When Karla GODINEZ GONZALEZ (CAN) was 13 years old, she was excited about a trip to Disneyland. Little did she know that she will be in a foreign country, Canada, and beginning a new life.

Hailing from Aguascalientes, Mexico, she did not speak the language nor did she know the culture when her parents settled in Surrey. But it was the start of a new life in an unknown land.

More than 12 years later, Godinez, having survived all the challenges, won the Pan-Am title after defeating two world champions in a single day, incidentally in her country of birth -- Mexico.

Godinez participated in her first senior Pan-Am Championships Friday and came home with a gold medal after beating world and defending champion Jacarra WINCHESTER (USA) 8-5 in the 55kg final.

This was one of the two gold medals Canada won on the second day of the tournament along with the USA which also won two in women's wrestling.

But the day belonged to Godinez who pulled off one of the most shocking wins at the Pan-Am Championships in recent history.

Her day began against U23 world champion Lucia YEPEZ GUZMAN (ECU), a bout that was significant in determining if she faced Winchester in the semifinal or final.

Godinez scored a takedown against Yepez before giving up two non-action points to lead 2-2 on criteria at the break. With just over a minute remaining in the bout, she scored a takedown to take a clear 4-2 lead and booked her spot in the semifinal.

The 24-year-old destroyed Nadia TRUJILLANO LA ROSA (PER) 11-0 in the semifinal while Winchester had a similar score against Yepez in the other semifinal.

Winchester was a heavy favorite in the final against Godinez and it began that way when she scored the first takedown in the final. But Godinez was unfazed by that.

She switched levels when going for a single leg against Winchester. After getting hold of the USA wrestler's left leg, she quickly gripped the right and tossed her opponent for a four.

But Winchester is known for a comeback. That is how she won her first world title. Both wrestlers traded stepouts before Winchester managed a takedown to tie the score 5-5. But she needed another point as Godinez led on criteria owing to her four-point move.

At this point, Godinez wanted to keep the pressure up and not let Winchester find an opening.

"[My plan] was to keep moving forward," she said. "I was going to leave everything on the mat. I was giving it all."

But Winchester upped the pressure and got a stepout, almost. Godinez circled back from the danger zone and managed to score a counter takedown when Winchester was hoping for a pushout. After the clock expired, the USA wrestler challenged the call but it was not to be.

As she struggled to hold her tears, Godinez's childhood and sacrifices flashed in front of her eyes.

"I've been through a lot and I feel like when I am on the mat, I put it out there," she said.

As a naturally reserved person, Godinez was struggling to express her feeling but embraced her younger sister Ana GODINEZ GONZALEZ (CAN) after the win. The two have an elder sister, the famous Mixed Martial Arts fighter Lupita, and it was on her insistence that they trained in wrestling.

Despite being late beginners in the sport, both Karla and Ana have been dominating nationally and internationally. Ana is a U23 world champion while Karla is now a Pan-Am champ.

The second gold for Canada came at 59kg when Laurence BEAUREGARD (CAN) beat Ameyalli JESSEL ROJAS (MEX) in their Round 3 head-to-head clash. Both had a win over Xochitl MOTA PETTIS (USA) in the morning session which made their clash a virtual gold-medal bout. Beauregard finished the bout in just 35 seconds, as Jessel had no answer to her leg-lace. 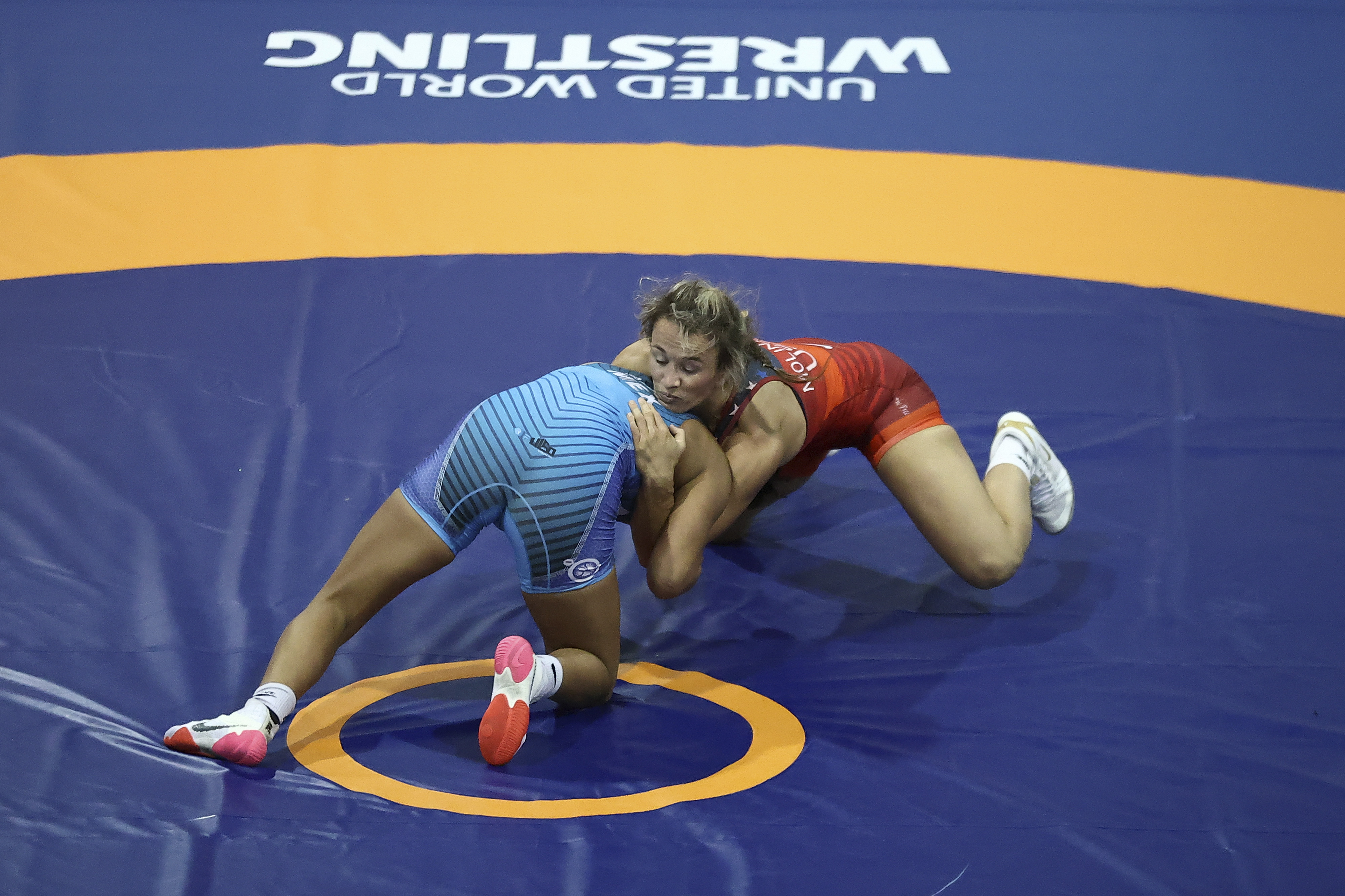 Molinari, who had begun this year with silver at Ivan Yargiun and gold at Istanbul Ranking Series, claimed the gold with an easy outing in Acapulco. She won all three of her bouts dominating her opponents.

The bout which confirmed her gold in the Nordic-style bracket was over Miki ROWBOTTOM (CAN) in Round 3. She defeated the Canadian via fall.

"I am not entirely thrilled with my performance here," Molinari said. "I am very big on detail and I honestly think that there are a lot of areas I can clean up but it's just good to be back out here, get back to weight, see where I need to clean up."

To the normal eye, it looked close to a perfect performance as she spent only four minutes and 46 seconds on the mat in the morning session. The gold will also help Molinari become the number one ranked wrestler in the weight class.

But that is irrelevant to her as she explained that the Pan-Am title was just a step toward gearing up to win the world title in Belgrade, Serbia later this year.

"Just one more to add to the list," she said. "These tournaments are steps to get to the world title. I know I am the best in the world and I am going to prove it this year. I say it every year but I continue to grow. It's about executing. The things we practice, we need to execute in competitions, being sharp and this is just practice for Worlds to do that." 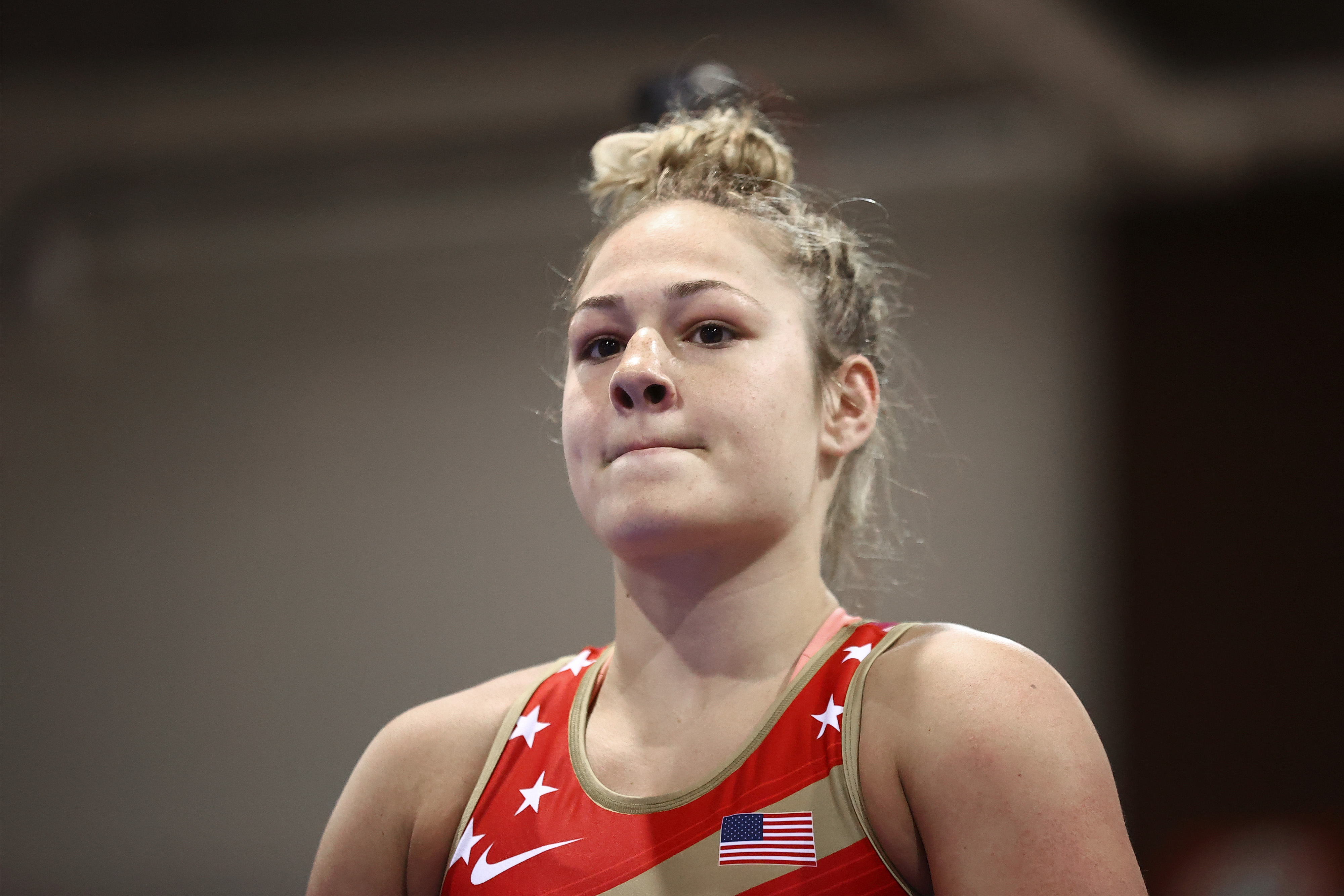 The second gold for the USA at 72kg was won by Grote to give the USA another 25 points in the team title. In a Nordic-style bracket, Grote won the gold over Maria GARCIA BAUTISTA (MEX) by defeating the Mexican wrestler in the Round 3 bout.

Grote, a former junior Pan-Am champion, won 10-0 over Brenda AGUIAR DOS SANTOS (BRA) in Round 1 while got a walkover by an injured Taylor FOLLENSBEE (CAN) in Round 2.

In the bout against Garcia, she began with a takedown and three gut-wrenches before finishing the match with another takedown. Grote did not give up a single point in the competition.

"It's a grinding season," Grote said referring to the US Open title she won five days back. "I am looking forward to the World Team Trial and winning the world title. That's the goal."

Grote has switched between wrestling for the USA and Canada but will be looking to make the USA world team later in June.

"I wanted to prove that I am getting better with every tournament that I compete in. That is my goal. I want to be better than the last tournament and I feel like I am consistently doing that. It's about believing in myself. I gave up on the external validation I used to seek and I know I have what it takes."

The next for the young wrestler will be to make a mark outside of the USA and Grote thinks she is ready to do that, even sending a warning to her rivals. 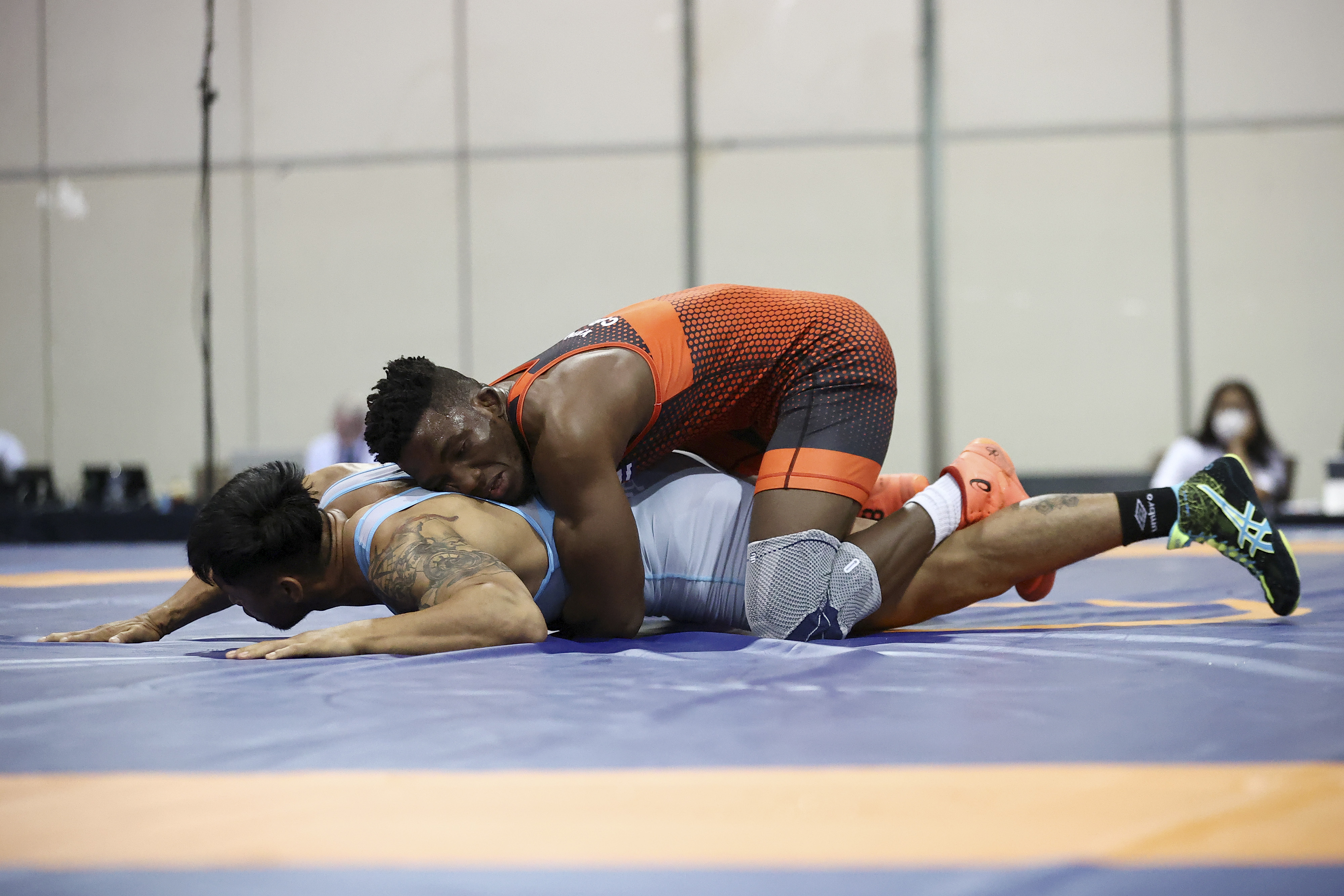 Guatemala will have to wait for its first-ever Pan-Am Greco-Roman champion as David CHOC HUOC (GUA) and Reinier JIMENEZ TERRY (GUA) both suffered losses in the 77kg and 82kg finals respectively.

Pena's bouts were not high scoring but his run to the final won controlled wins. In the final, he was awarded a point for Choc's passivity. He managed to score a four-pointer from par terre and then added two more points. Choc did score a reversal and then a point in the second period but that was not enough.

This was the second straight year that Choc had missed the chance to create history as in 2021 he lost the final to Benjamin PROVISOR (USA) at the home Pan-Am Championships. 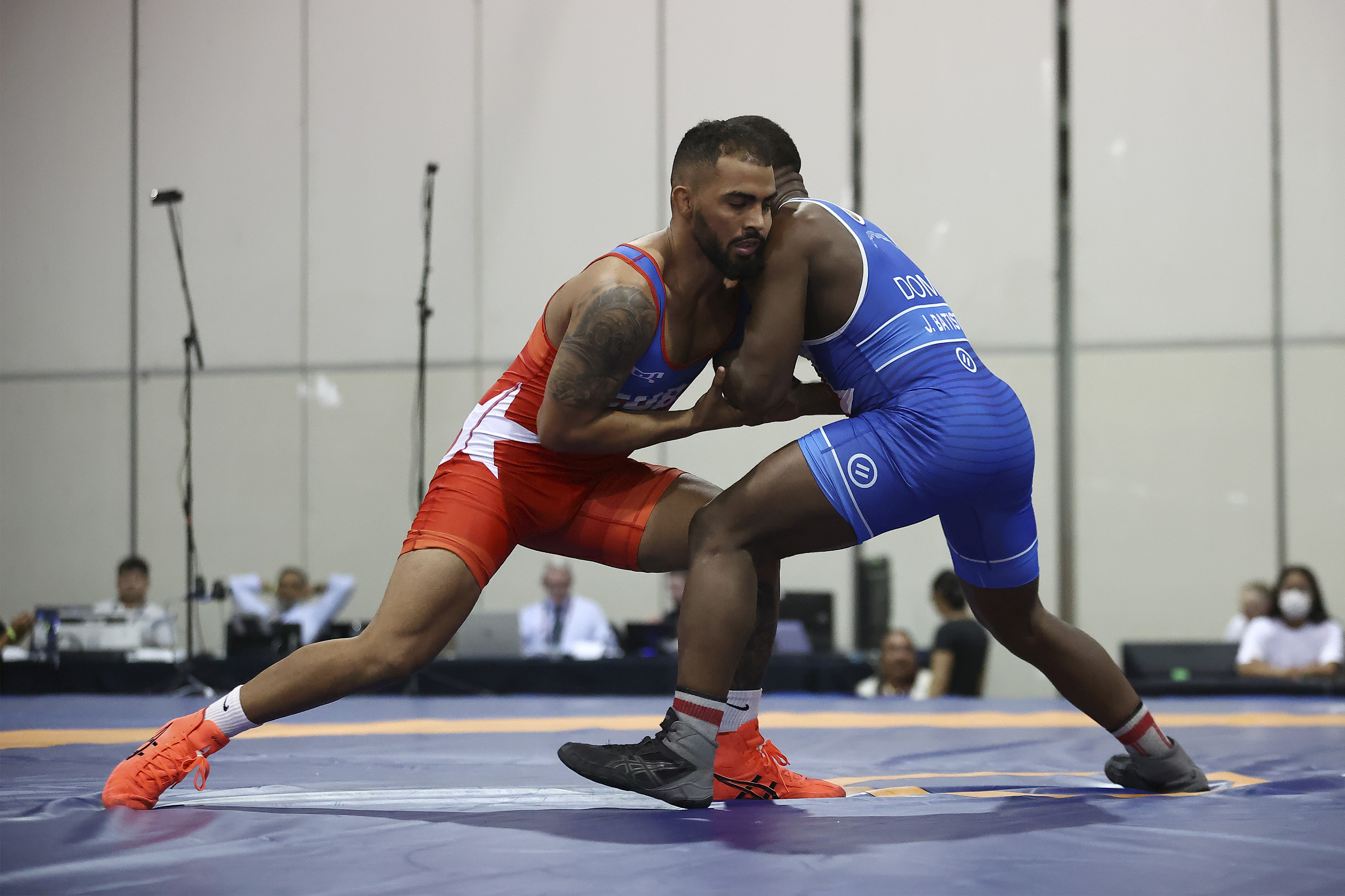 Cuba's second gold of the day went to two-time U23 world medalist Gregorich who defeated Batista with two stepouts and three guts from par terre. The Tokyo Olympian now has two Pan-Am titles, four years after he won the first.

His gold helped Cuba gain some valubale points in the team title race which they were destined to finished second.

But Vicente 1-1 win over two-time Pan-Am bronze medalist Jimenez in the 82kg final helped Mexico stay ahead in the team title race which was won by the USA with 165 points, 17 more than second-placed Mexico. Cuba had 101 points to finish third.

Vicente had suffered a 10-1 loss to Jimenez in the morning session but he avenged that when it mattered the most in the gold medal bout. Vincente and Jimenez exchanged inactivity points in either period of the final with the Mexcian winning 1-1 on criteria.

The remaining six women's wrestling and two freestyle weight classes will be in action Saturday in Acapulco, Mexico.

Key Match: Forrest MOLINARI (USA) df. Miki ROWBOTTOM (CAN), via fall in Round 3