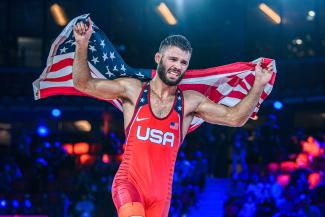 OSLO, Norway (October 5) -- Winning a first world title confirmed the progress Thomas GILMAN (USA) has made as he continues to learn the international game. Now he hopes to use it in a quest to avenge a recent loss that still lingers.

Gilman showed a new-found maturity and composure when he carved out a 5-3 victory over Alireza SARLAK (IRI) in the freestyle 57kg final on Monday night in Oslo, giving him the gold medal in his third trip to a World Championships.

The victory at Jordal Amfi arena came two months after Gilman was dealt a heartbreaking 5-4 loss in the first round of the Tokyo Olympics by two-time world champion Zavur UGUEV (ROC), who went on to take the gold.

Gilman, who worked his way through the repechage to take home an Olympic bronze, noted the difference in the two matches beyond their outcomes.

"If this was a fist fight with the Iranian, Uguev was like a chess match," Gilman said. "He's very good at winning. Obviously he's a great wrestler, and a great athlete. I think what he's best at is finding a way to win, and he showed that at the Olympic Games."

The 27-year-old Gilman, who won a silver medal in 2017 and placed fifth in 2018 in his previous World Championships, said the loss to Uguev opened his eyes to the need to wrestle depending on the situation, and to not just wantonly try to score points. 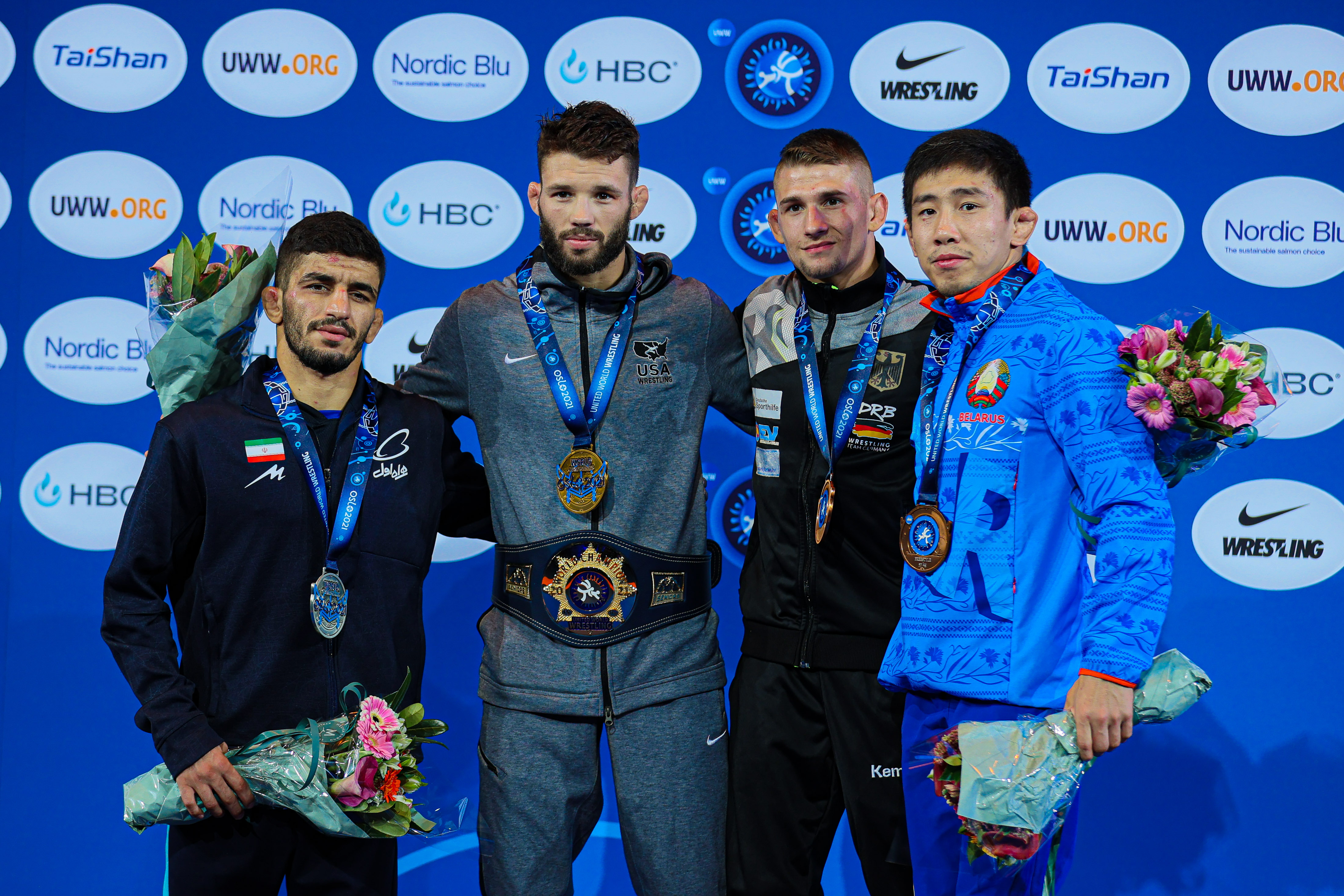 "I'm starting to learn how to win as a competitor," Gilman said. "I think I'm a pretty decent wrestler. But I don't know if I know how to really win on a consistent basis yet. Uguev, he can. I'm looking forward to that rematch. I respect him a lot."

In their Olympic showdown at Makuhari Messe, Gilman was leading 4-3 when Uguev managed to conjure up a takedown in the final seconds to snatch the victory.

"It's a mental thing, maybe an emotional thing," Gilman said. "Where instead of just wrestling through the positions, I kind of try to win. When you start trying to win, that's when you lose.

"In the Uguev match, I went from just wrestling to score points to, 'OK, there's 46 seconds left,let's try to win this match,' and I got taken down and lost the match."

Against Sarlak, a 2019 world U23 bronze medalist, Gilman fought his way to a 3-0 lead going into the second period. He used his previous experience facing Iranians and knowledge of their tendencies to then score a well-executed single-leg takedown that gave him a decisive five-point cushion.

"I was pretty familiar with that position," Gilman said, citing past matches with lightweight star Rezi ATRINAGHARCHI (IRI). "Iranians are really good at throwing your head to the outside, bust your lock, focus on those very fundamental things.

"I just kind of chuckled to myself, like, 'This is familiar. This is Iran right here.' If I could describe Iranian wrestling, it would be beyond the underhook and their hand wrestling. It would be fundamental and hard leg defense."

Gilman said he appreciates scrappy wrestlers like Sarlak because they force him to raise his level.

"You always know that when you are wrestling Iranians, they are known for their toughness and their hand fighting. A lot like the way I wrestle, so I was looking forward to the fist fight, the dog fight....I am grateful to him as an opponent to push me and make me better." 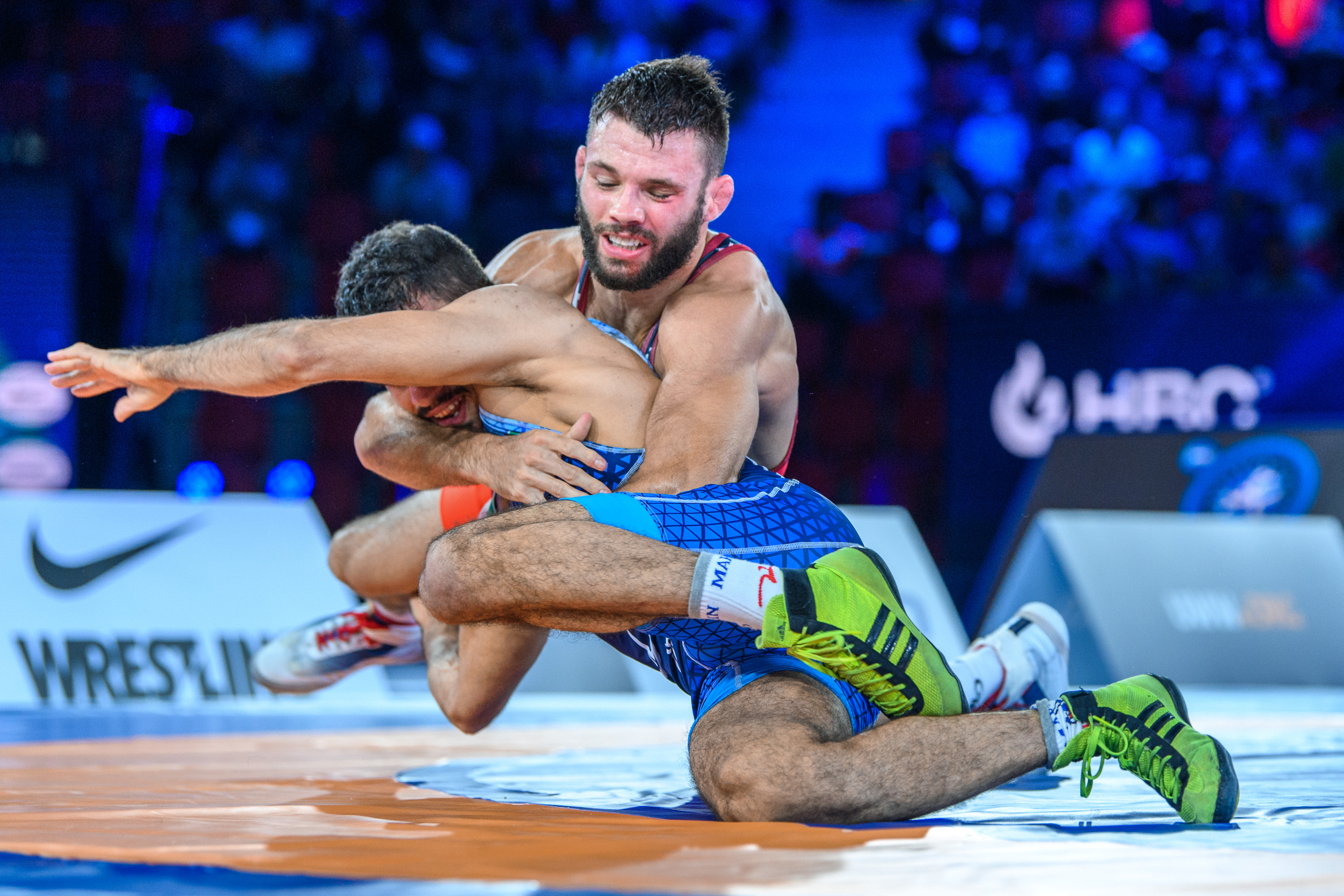 In the post-match interview, Gilman referred to "we" as the winner. Asked to explain, he noted how wrestling, while an individual sport, needs a team for success.

"From me, myself and I, all the way to me and my wife, my dogs, my unborn child, my coaching staff, USA Wrestling, my training partners, my annoying cameraman," said the Iowa native, who moved to the Nittany Lion Club in Pennsylvania in 2020 to prepare for the Olympics under Cael
SANDERSON.

"Don't let this fool you, I did nothing really. I did 20 minutes of work out there, but it's all the people behind the scenes, the people who you don't see, people who would never take credit for anything. That's we."

The support of his wife was vital, particularly when it came to just making the tough decision to enter the World Championships so soon after the Tokyo Olympics.

"I didn't want it to be emotional, I wanted it to be the right decision," Gilman said. "So I got home and talked to my wife, and some of those conversations were a little bit difficult....But she understood, she said, hey, I know you want to do this, you have to do it." 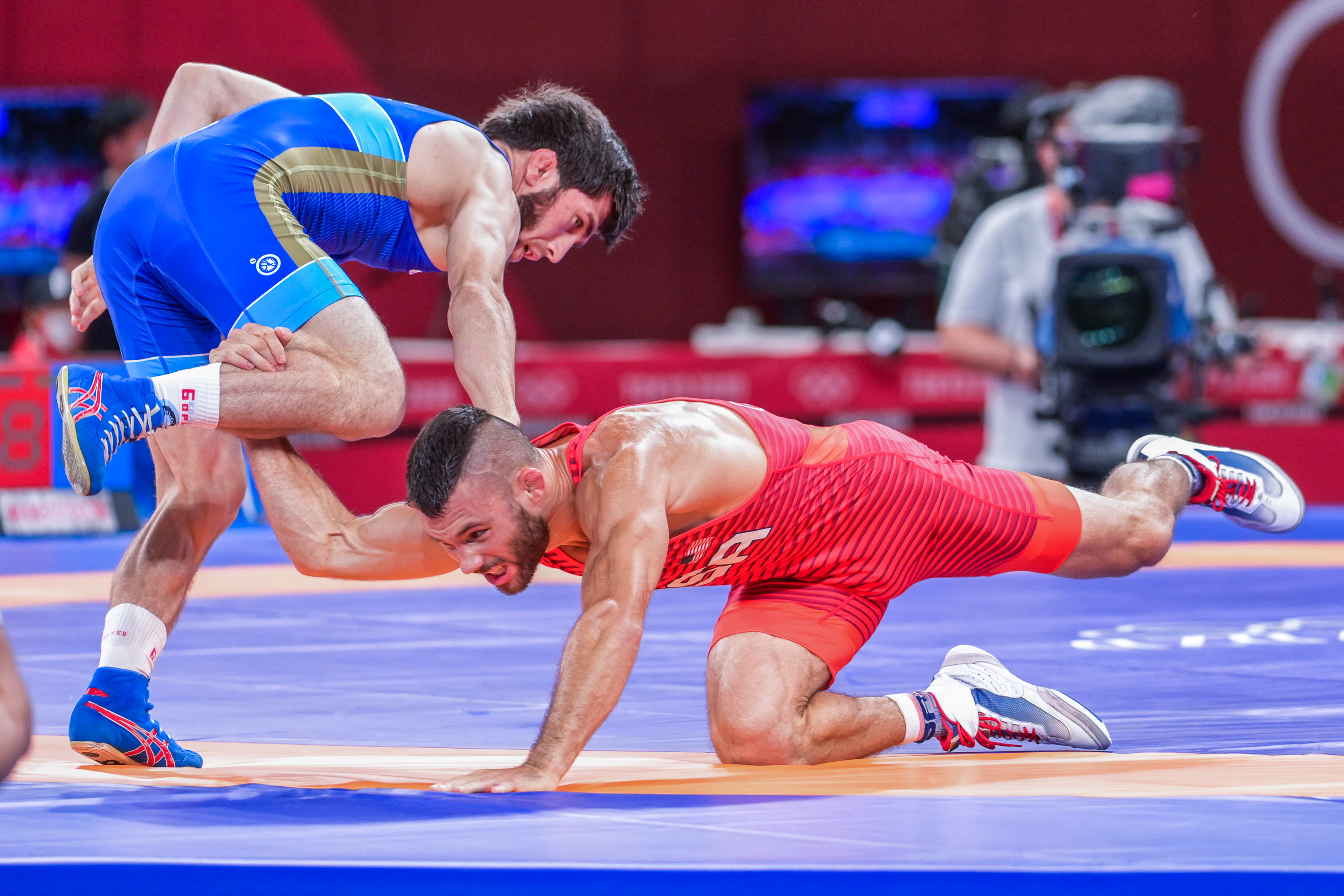 His international debut came in 2011 at the world cadets, where he placed 10th. After finishing eighth at the 2013 world juniors, he returned in 2014 and made his first podium by winning a bronze medal.

Three years later, he was in the final of a senior World Championships, taking the silver at Paris 2017 after losing to Yuki TAKAHASHI (JPN), who would finish out of the medals at the Tokyo Olympics.

As an Olympic medalist, Gilman's place on the team to Oslo was assured without having to go through the U.S. team trials. But that doesn't mean he didn't have hurdles to get over, including having to get his weight back down again and contracting Covid-19.

The bout with the coronovirus three weeks ago posted the greatest threat to his preparations. But he also viewed it as another test of his resilience to overcome hardships.

"I was like, shoot, am I going to be able to go and pass the tests?" Gilman said. "I came to the conclusion that God was telling me, 'You think you're tough? Well let's see how tough you are.'

"It was more mental, emotional and spiritual than physical, because physical you can push through anything. I did and we're here, and now it's time for a break."

Known for being deeply religious and patriotic, Gilman said he had some qualms about taking a victory lap with the American flag draped around his shoulders, saying he considers the act disrespectful.

"But it's a tradition, it's what we do, so I'll deal with my stepfather when I get home," he said. "Just to stand on top of the podium, after being silver, fifth, bronze, now gold, to see our flag the highest where it belongs and hear our national anthem, that's very special to me."

As he aims to continue improving and awaits a second shot at Uguev, Gilman can now sit back and bask in what he has accomplished over the past two months.

"It's a lot coming off the Olympic Games. You're at maybe an all-time high, I was so close to accomplishing one of my lifelong dreams," he said "I was pretty proud of myself. I still am. It's nothing to really slough off, being an Olympic bronze medalist."