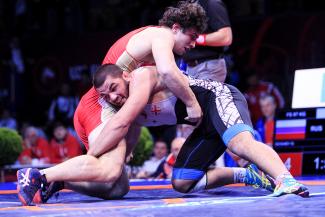 SZOMBATHELY, Hungary (March 29) – Georgia’s Avtandil KENTCHADZE (74kg) and Givi MATCHARACHVILI (97kg) pulled out a pair of wins in the closing seconds of their gold medal bouts Tuesday evening at the European Under-23 Wrestling Championships.

Kentchadze scored a four-point takedown with 10 seconds remaining in the 74kg final for a 4-2 victory over Zelimkhan KHADJIEV (FRA) and Matcharachvili left even less time on the clock as he landed on top of a throw attempt by Georgi GOGAEV (RUS) for a fall at 6:00 of the 97kg final.

Kentchadze forced Khadjiev on the 30-second clock with 40 seconds remaining in the bout and then swept in for a double-leg takedown to the back for four points and the first major international title of his young career.

Kentchadze was runner-up in last November’s Golden Grand Prix Final in Baku to Rio 2016 bronze medalist Yabrail HASANOV (AZE). His best age-group finish to date had been a third place at the 2015 junior European championships.

In the evening’s finale, Matcharachvili and Gogaev traded the lead five times over five minutes in their duel at 97kg before Gogaev locked up chest-to-chest for a final throw. The Georgian, however, sagged and stepped to the side to plant Gogaev on his back for the fall.

Matcharachvili, who was cadet world champion in 2014, finished in third place at last year’s U23 meet in Bulgaria and second at the European junior tourney in Bucharest.

The two gold medals and a bronze medal from Iveriko JULAKIDZE (65kg) give Georgia the unofficial lead in the freestyle team standings with 32 points, followed by Turkey with 27 points and Russia with 26 points from two runners-up and a third-place.

The two gold medals and a bronze medal from Iveriko JULAKIDZE (65kg) give Georgia the unofficial lead in the freestyle team standings with 32 points, followed by Turkey with 27 points and Russia with 26 points from two runners-up and a third-place.

In the first gold medal final of the evening, Rio 2016 Olympian Suleyman ATLI (TUR) converted on single-leg attacks in each period of a cat-and-mouse match-up with Azamat TUSKAEV (RUS) to claim a 4-2 victory. 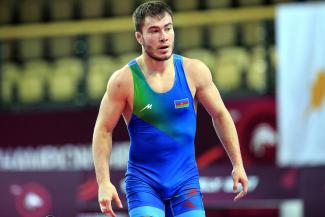 At 65kg, Teymur MAMMADOV (AZE) received an injury default from Haydar YAVUZ (TUR), who was injured late in his technical fall win over Julakidze in the semifinals.

Mammadov, who finished in eighth place at the U23 meet one year ago, won the junior world title in 2015 and was the Youth Olympic Games gold medalist and cadet world champion in 2014.

Mammadov also shocked returning champion Imam ADZHIEV (RUS) in their opening bout Tuesday but slipping behind in the closing seconds for a two-point takedown and a 2-2 victory on criteria.

Adzhiev, however, bounced back in the repechage bouts and nailed down a bronze medal with a 13-2 technical fall against Marc DIETSCHE (SUI).