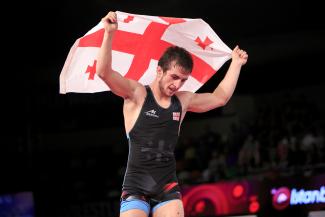 ISTANBUL, Turkey (June 5) – The Georgian duo of Zviadi PATARIDZE (GEO) and Nugzari TSURTSUMIA (GEO) stopped the host nation Turkey from grabbing a gold medal on the second day of Greco-Roman wrestling at the 2018 U23 European Championships.

The Georgian wrestler nearly conceded the technical superiority victory after surrendering a takedown and three left-sided gut wrenches, but obtained an exposure of his own, bringing the score to 8-2.

Tsurtsumia ended the first period with a four-point throw off a re-drag, closing Ozturk’s lead to two points heading into the second period.

In the final period, the 2015 junior world runner-up scored five additional points from a step out and another four-point throw, ending the 55kg finals match on an 11-0 run.

Azerbaijan, Denmark, and Romania also captured gold medals on the second day of competition at the Bagcilar Sports Complex in Istanbul, Turkey.

Mihut’s first-period passivity point and two gut wrenches proved to be the difference in fighting off Biciu for the gold medal.

Bisultanov’s seven-point first period was kicked off with a four-point throw near the out of bounds line, giving the wrestler from Denmark the 4-0 lead. He followed that with a passivity point and correct throw, ultimately taking the win, 7-1.

In the 87k gold-medal bout, Islam ABBASOV (AZE) scored his takedown and gut wrench in the first period and cruised to the 4-1 victory over Ivan HUKLEK (CRO).