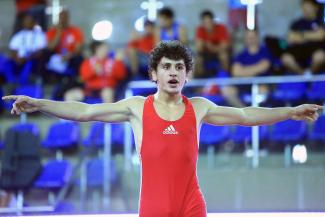 SALVADOR, Brazil (April 12) –Georgia continued their dominance of the Junior World Wrestling Championships Wednesday, winning a pair of Greco-Roman gold medals in the night’s finals to up their tournament tally to four gold.

Zviadi PATARIDZE (120kg) and Ramaz ZOIDZE (66kg) each captured titles with the duo’s efforts helping to earn Georgia the team title with 63 points followed by Azerbaijan in second place with 53. Russia took third with 47 points.

In the 66kg finals Ramaz ZOIDZE (GEO) and Akhmed KAYTSUKOV (RUS) wow’ed the Salvador crowd with a flurry of activity. It was Zoidze on the board first with a monster headlock for four points, followed closely by a two-point over-under toss to sprint and the 6-0 lead.

Zoidze’s lead started to evaporate late in the first when he missed on a headlock, giving Kaytsukov his back and the gut wrench for two points. But in the second period it was all Zoidze, as the Georgian found a snap down and gut wrench to end the match by technical fall, 11-2.

Georgia finished the tournament with four champions out of a total of five finalists. 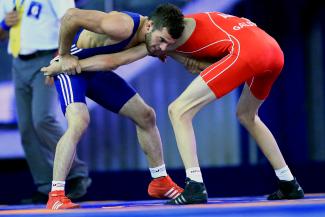 Murad MOMMADOV (AZE) repeated as Junior World Champion in a brilliant match jam-packed with aggressive attacks and tactical level changes. After a first period takedown Mommadov found a shuck and a quick gut wrench in the second to earn the 55kg gold medal, 6-0. 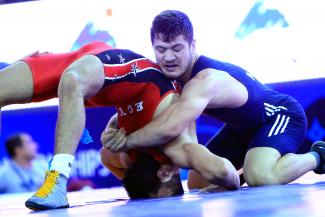 Cengiz ALI (TUR) earned the title at 84kg and derailed Azerbaijan’s Islam ABBASOV’s hope for a repeat world title. The Turkish brute kept Abbasov on his toes, forcing the taller Azeri to bow his head and fall forward on several occasions. The title is Ali’s first world championship.

Throws were abound in the 84kg bronze medal final where Zakarias BERG (SWE) fought back from an early 4-1 deficit against Girgi MELIA (GEO) to score back-to-back four-point throws to go ahead 9-4 at the break. Berg finished the match in the second with a takedown and turn to earn the 13-4 technical fall.