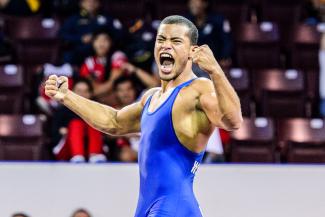 LAS VEGAS, Nevada (September 5) – The kings of Greco-Roman kick off the 2015 Senior World Wrestling Championships on Monday with a Game of Thrones collection of contenders, pretenders and palace intrigue.

At stake will be much more than the glory of carting off a chunk of the championship hardware. There will also be the opportunity to qualify one’s country for the Rio 2016 Olympic Games and, with that, become the wrestler selected for that honor. 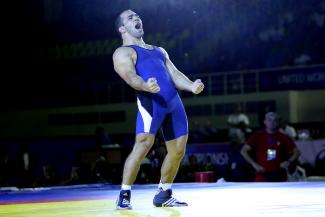 Current and former world champions Arsen JULFALAKYAN (ARM) and KIM Hyeon-Woo (KOR) top the list at 75kg and will be centers of attention on the opening day of action the Orleans Arena in Las Vegas.

Kim, the 2013 world champion, and last year’s winner Julfalakyan have been ranked one-two throughout the year with Kim edging Julfalakyan, 1-0, at the Grand Prix of Spain in July.

Kim is also the London 2012 gold medalist at 66kg and Incheon 2014 Asian Games champion. Julfalakyan was 74kg silver medalist at London 2012 and a world bronze medal winner in 2013.

But, the list of contenders at welterweight does not end with the top two. London 2012 gold medalist and 2011 world champion Roman VLASOV (RUS) has recently replaced last year’s 71kg world champion Chingiz LABAZANOV (RUS) on the Russian entry list.

Vlasov lost his title to Kim in the 2013 world final, but redeemed himself with a win at the Ion Corneanu Memorial in July 2014. Vlasov also looked in top form with a triumph at the prestigious Pytlasinski Cup in July.

Former world champ Saeid Mourad ABDVALI (IRI) also defeated Kim on his way to the 2011 title at 66kg, but lost at 75kgin the 2014 Asian championships.

And, at 98kg, Artur ALEKSANYAN (ARM) has turned away all challengers since his loss in the 2013 world final, including a 3-1 semifinal triumph one year ago over London 2012 gold medalist Ghasem REZAEI (IRI).

European Games champion Islam MAGOMEDOV (RUS) could be the latest challenger to square of Aleksanyan. 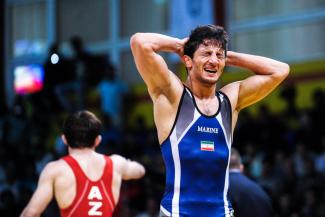 The second day of action at Orleans Arena will feature the two most decorated wrestlers currently active in the men’s events as Hamid SORYAN (IRI) and Mijian LOPEZ NUNEZ (CUB) seek to add to their collection of world championship hardware.

Soryan, who won his seventh overall world title in 2014 (including the London 2012 gold medal), has had an unusual year, walking off the mat in protest in a match-up with former world champion Ivo ANGELOV (BUL) in April and then dropping a controversial 4-4 decision to Ibragim LABAZANOV (RUS) at the Pytlasinski Cup in July.

Soryan may well get another shot at 2013 champion at 60kg Angelov, but needs to keep an eye out for other dangers as well, including World bronze medalist Elmurat TASMURADOV (UZB), European Games winner Stepan MARYANYAN (RUS) and 2013 world champ YUN Won-Chol (PRK).

At the other end of the scale, Lopez Nunez won his fifth world title in 2014 and followed up with a dominating show at the Pan American Games at 130kg.  His last loss at the elite level was to Riza KAYAALP (TUR) in the super heavyweight final at the 2011 world meet in Istanbul.
European Games gold medalist Kayaalp appears to be the leading challenger to Lopez Nunez, but double medal threat Beylal MAKHOV (RUS) will look to improve on his 2014 world bronze. Lopez Nunez edged Makhov, 1-0, in last year’s semifinals.

The two other weight categories on tap for Tuesday are non-Olympic categories with European Games champions Rasul CHUNAYEV (AZE) and Evgeni SALEEV (RUS) the immediate favorites. 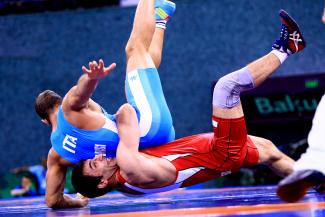 Greco-Roman’s 85kg weight category will share the mats with the first day of women’s events and could hail a generational shift at middleweight.

Last year’s 30-something finalists Melonin NOUMONVI (FRA) and Hasan Saman TAHMASEBI (AZE) have struggled some in 2015 but Noumonvi will be in the hunt to repeat and Tahmasebi will seek to improve on his two world silver medals in a row.

European Games finalists David CHAKVETADZE (RUS) and Zhan BELENYUK (UKR), both 24, will lead a younger crew of challengers. Belenyuk, the 2014 European champion, rebounded from a loss to Tahmasebi in Tashkent for a world bronze medal.