Future Wrestling World Championships to be Scheduled for October 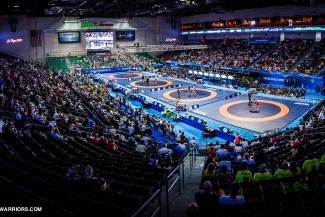 CORSIER-SUR-VEVEY (October 14) – United World Wrestling has announced that the 2018 and 2019 wrestling world championships will be scheduled for the month of October. The premier wrestling event of the season, the world championships have traditionally been held in late August or early September.

The change comes as part of the recently approved 2018 and 2019 competition calendars, which saw a smattering of adjustments meant to optimize viewership and increase participation. The calendar also sought to accommodate quadrennial Games such as the 2018 Youth Olympic Games, 2018 Commonwealth Games and 2019 Pan-Am Games.

“We are looking forward to the 2018 and 2019 seasons and think the calendar gives our wrestlers and fans many options to get involved with the sport,” said United World Wrestling president Nenad Lalovic. “We must always stay aware of our partners’ needs and any potential scheduling conflict with other sports.”

As part of the shift, the Wrestling World Cup – wrestling’s annual team-based competitions – will be held after the world championships, near the end of the calendar year.

The 2018 Cadet continental championships were also moved to earlier in the year to ensure athletes could qualify from their respective regions in time for the Youth Olympic Games. In 2014 the wrestling federation held a separate qualifying tournament for competitors.

The full 2018 and 2019 calendar can be found on the United World Wrestling website, here.