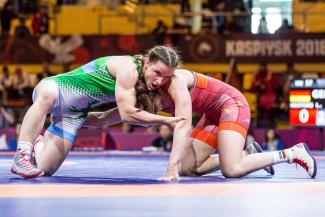 Host nation Russia along with five other nations put wrestlers into the finals of the 2018 European Championships at The Palace of Sport Youth in Dagestan, Russia.

At 53kg, 2017 world champion Vanesa KALADZINSKAYA (BLR) capitalized on two takedowns and a step out to defeat Maria PREVOLARAKI (GRE), 5-2 in a very slow paced match.

In the other semifinal, Stalvira ORSHUSH (RUS) trailed after giving up a four-point arm spin to Poland's Katarzyna KRAWCZYK (POL). The Russian remained calm and took the outright lead after picking up her third takedown, ultimately winning the bout, 6-5.

The Russian picked up the match-winning takedown with 13-seconds left, closing out the match listening to the Azerbaijan coaching staff pound the mat in disgust.

62kg
The third Russian to make it to the finals was Inna TRAZHUKOVA (RUS) who routed Germany's Luzie MANZKE, 8-2. Trazhukova kicked started the point scoring friendzy with a four-point throw and closed the match with a takedown and exposure.

Olli, the 2017 U23 European champion extended her lead to 1-0 lead after a takedown to a gut wrench. The Bulgarian coaches questioned the call and threw the challenge block. Olli was award the point for the failed challenged and beat Viktoria Ivanova BOBEVA (BUL), 6-0.

72kg
Jenny FRANSSON (SWE), the 2016 Olympic bronze medalist is Sweden's lone women's wrestling finalist at the fourth day of action. She dominated her way to an 8-1 semifinal victory over Turkey's Beste ALTUG and will wrestle Belarus' Anastasiya ZIMIANKOVA in Friday nights final. 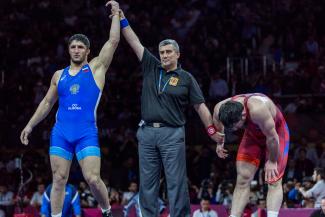