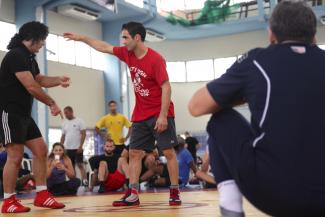 RIO DE JANEIRO (November 23) -- Freestyle coaches from around the world concluded their three day clinic this week on a note of companionship and communication.

The clinic, which was the first to ever combine coaches of female wrestling and women's freestyle, was composed of referee led discussion of freestyle rules, classroom workshops and on-the-mat technical work.

Coaches from more than a dozen nations attended the clinic including those from Kazakhstan, Morrocco and Ecuador. The course was funded in part by a grant from Olympic Solidarity and attendees paid a visit to the Olympic Park being built for the Rio Games.

On the final day of the three day clinic, David LOPEZ (MEX) led a classroom discussion on how best to use data to improve on-the-mat performances - an area where world wrestling hopes to become a leader.
[[{"fid":"2399","view_mode":"wysiwyg","type":"media","link_text":null,"attributes":{"height":440,"width":850,"style":"width: 800px; height: 414px; margin: 5px; float: left;","class":"media-element file-wysiwyg"}}]]
Lopez presented test cases from the 2014 world championships and explained how some of the insights can be used to better improve the preparation of athletes for major tournaments. In one example Lopez used female wrestling world champion Adeline GRAY (USA) and showed from where and how the wrestler scored. The data was combined with video and presented to the coaches.

"This is not the final solution, but we can use this data to gather perspective and combine it with other information to make better coaching decisions," Lopez told the clinic. "Numbers should be analyzed as part of a wider coaching strategy."

To practice the new platform and how to implement it in their individual programs Lopez divided the audience into working groups to work on test cases.

Teams analyzed point scoring from various positions and shared their feedback with the group. That feedback was used to brainstorm new mechanisms to both create and analyze the data.

"I think this was an interesting and productive way to think about wrestling," said Gusel MANYUROVA head female wrestling coach of Kazakhstan. "This system helps to know if your impression of athlete is realistic but know you have rational non-emotional look at your athletes and that helps with preparing them for big tournaments."
[[{"fid":"2408","view_mode":"wysiwyg","type":"media","link_text":null,"attributes":{"height":440,"width":850,"style":"width: 800px; height: 414px; border-width: 5px; border-style: solid; margin: 5px; float: left;","class":"media-element file-wysiwyg"}}]]
"Performance analysis is well known in other sports, but not in combat sport," said Lopez. "I think we can be among the first capitalize on this information for the future."

Out of the classroom and on-the-mat coaches Terry STEINER (USA) and Tanya VERBEEK (CAN) led a workshop of several techniques, and like the classroom portion opened the discussion to coaches with variations on similar techniques. New moves were explored by coaches around the world and shared.

"This platform works for our coaches because the coaches are sharing ideas and different visions for technique and philosophy of wrestling," said Steiner. "We've all been in the sport for 30-40 years but have different cultures and ways of doing things. A camp like this the beauty is the sharing of ideas and coming together. We have to have great fights in the competition mays but off the mats we need to be cooperative and work together."

The three day clinic wrapped on Sunday with a social and banquet which further progressed the atmosphere of idea sharing and workshop. Several coaches stayed to lead their teams through the upcoming training camp and wrestle in the following weekend's Brazil Cup.

"Most if us spend more time with each other than our families," said Steiner. "I want these clinics to create friendships and brotherhood and sisterhood on the mat that will last."

"That's so important, and for me, that's the key to success."