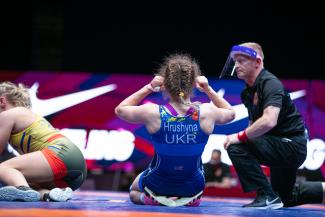 Hrushyna Akobiia, the ’20 European runner-up, scored 16 points and only surrendered one on her way to reaching the 57kg finals. She stopped two-time world medalist Emese BARKA (HUN), 6-1, then shot down Sara LINDBORG’S (SWE) hopes of booking Sweden’s second ticket of the day to the Tokyo Olympic Games.

In her semifinals meeting with Lindborg, Hrushyna Akobiia scored four takedowns before sticking Lindborg to her back in the bout's closing seconds. She was inches away from booking the fall but time expired and she was awarded the 10-0 technical superiority victory.

She’ll wrestle Bulgaria’s Evelina NIKOLOVA for gold on Saturday night. The ’15 world bronze medalist earned her nation's Tokyo berth with a 4-2 come-from-behind win over Bediha GUN (TUR). Nikolova and Gun traded takedowns, but the Bulgarian restored her lead with a late second-period takedown to gain the two-point advantage.

Koliadenko was the second Ukrainian wrestler to score a perfect ten and earn an Olympic license. She barely broke a sweat in her semifinals match agast Mariana CHERDIVARA ESANU (MDA). She blew through the Moldovian wrestler, 10-0, in the first period and will compete tomorrow night for 62kg European OG Qualifier gold.

Kaladzinskaya, a two-time world champion, led Iulia LEORDA (MDA), 9-0, when she stopped wrestling after thinking she earned the 11-0 technical superiority win. She surrendered a reversal and a takedown but comfortably cruised to the 9-3 win.

Marzaliuk looked marvelous in her semifinals meeting against Mariya ORYASHKOVA (BUL). The '17 world finalist got to her double underhooks and the rest was history. She only needed just over two minutes to pick up the fall and move into the 76kg finals.

Selishka fell behind 1-0 against Poland’s 38-year-old Iwona MATKOWSKA but strung together two takedowns for the 4-1 victory. Evin DEMIRHAN (TUR), a two-time world medalist, awaits the European champion in the 50kg finals.

The 25-year-old had a minimal 1-0 lead over Julie SABATIE (FRA) after the first period but flew out of the gates in the second period with a head inside single, coupled with a gut wrench to extend to lead to 5-0. Although she shut it down with 30 seconds, she cried tears of joy with a 5-1 victory.

Russia was the final country that had a pair of semifinal winners on Friday night.

Larroque, who became the ninth French woman to qualify for the Olympic Games, rocked Dalma CANEVA (ITA), 10-0, in the semifinals. The two-time world-medal winner scored three takedowns in the first period and closed out the match with a takedown and an exposure in the second period to claim the 11-0 shutout win.

Although it wasn’t the ideal way you’d want to qualify, London Olympic champion Vorobeva snuck past Martina KUENZ (AUT), 2-1, thanks to a pair of inactivity calls. She’ll wrestle the long and lengthy Marzaliuk for the 76kg crown on Saturday night. 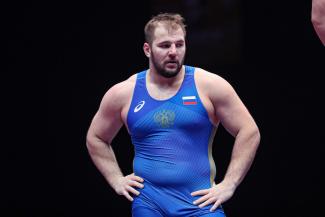