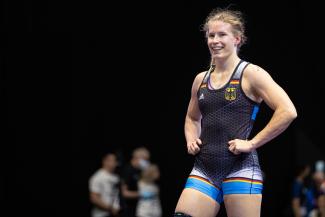 WARSAW, Poland (June 10) --- Just over a month ago, Aline FOCKEN (GER) was in Warsaw for the European Championships with an aim to become the continental champion. She, however, failed to do so after losing in the quarterfinals.

“I wanted a lot [at European Championships],” Focken said. “I wanted to be the champion and put myself under a lot of pressure and made mistakes.”

Just in the space of seven weeks, Focken transformed herself with a mature approach to her bouts which helped her win the gold medal at the Poland Open in Warsaw on Thursday.

With the gold medal, she also passed Hiroe MINAGAWA SUZUKI (JPN) for the number two seed in Tokyo.

“The difference today was I was calm and wanted to wrestle and she how the progress was going,” she said.

The top-four seeds at the Olympic Games will be Adeline GRAY (USA), Rotter Focken, Minagawa and Elmira SYZDYKOVA (KAZ), respectively.

Focken admitted that she has been struggling to be consistent at the 76kg despite winning the world title, explaining it as the pressure she puts herself under.

“My problem is that I put myself under a lot of pressure to win every tournament,” she said. “But there are so many tough opponents, it's not possible to win every time. But I want to and I make mistakes.”

But her performance in Warsaw was a sneak into what she has been working on, making her a potential threat to the Olympic title.

“I have to work a lot,” she said. “I am working on my mental side a lot. I changed the weight class from 69kg to 76kg so that's difficult. I try to stay calm and focus on myself.”

In the final, Focken devised a strategy to keep her rival Epp MAEE (EST) at bay and win 3-0.

“We have known each other for long because we train in camps a lot,” she said. “I wanted to score my own points. It's difficult to score as she is small and moves really good. But I also did work in the second round to get more movement and score. I had no plan how to score but I wanted to and I did.”

Mariya STADNIK (AZE) was also in Warsaw in April and she captured the gold at European Championships. She repeated that feat as she won the 50kg gold at the Poland Open.

In the process, she also stole the number one seed at the Olympic Games from former number one seed Emilia VUC (ROU) after storming her way to an early morning 12-2 victory. In their rematch of the gold-medal match from the ’19 World Championships, Stadnik gave up the initial takedown but scored 12 consecutive points in 25 seconds.

She also scored technical superiority wins over Erin GOLSTON (USA) and Mariia TIUMEREKOVA (RUS) on her way to the finals, where she met her ’21 European semifinals opponent Oksana LIVACH (UKR).

“I am happy with today's result because before this I came to the camp from the mountains and it is hard to breathe a little on the mat when you do that. It feels like you are a heavyweight,” Stadnik said.

“But this competition was needed because I need to check myself before the Olympics. I have only two months left.” 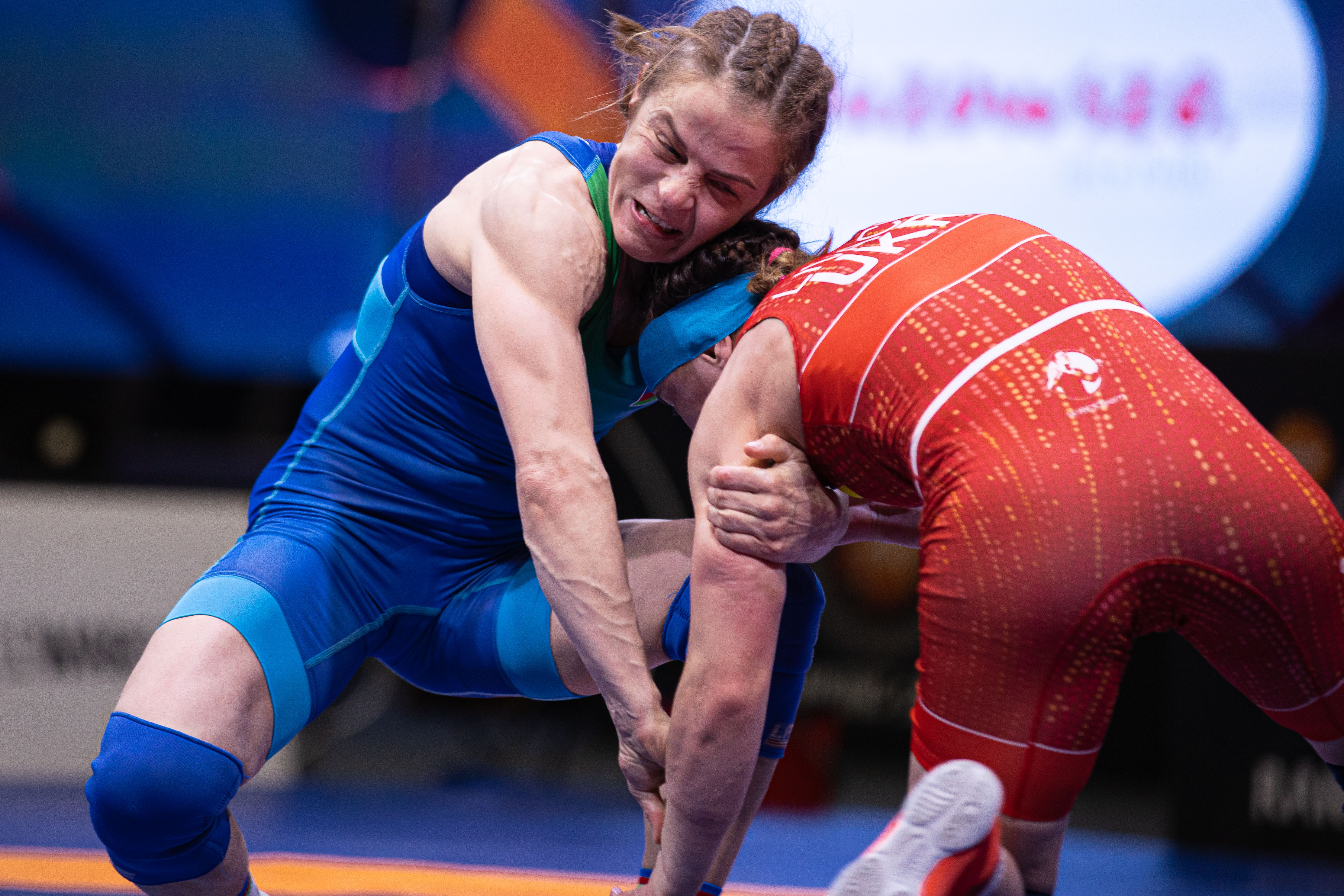 In the finals, Stadnik quickly jumped out to an early 7-0 lead against the Ukrainian world bronze medalist The Azeri two-time world champion scored on a step out, four-point toss, and ahead inside single leg before surrendering a step out of her own. She capitalized on a late open shot attempt from Livach and spun behind for the 9-1 lead. Despite failing to score in the second period and giving up three unanswered points, Stadnik held on to the 9-3 win and claimed 16 Ranking Series points.

Her performance on Thursday was a big improvement from Euro Championships as she was still regaining shape after a long gap due to COVID.

“For a year and a half I did not participate anywhere and it was difficult psychologically. Here I was in better shape and I was more confident.,” she said.

The three-time Olympic medalist is chasing a career-defining gold medal in Tokyo after winning two silver and a bronze at her previous Games appearances.

At 62kg, Aisuluu TYNYBEKOVA (KGZ) overpowered Ana GODINEZ (CAN) in the gold-medal match and will be the top seed at 62kg in Tokyo. 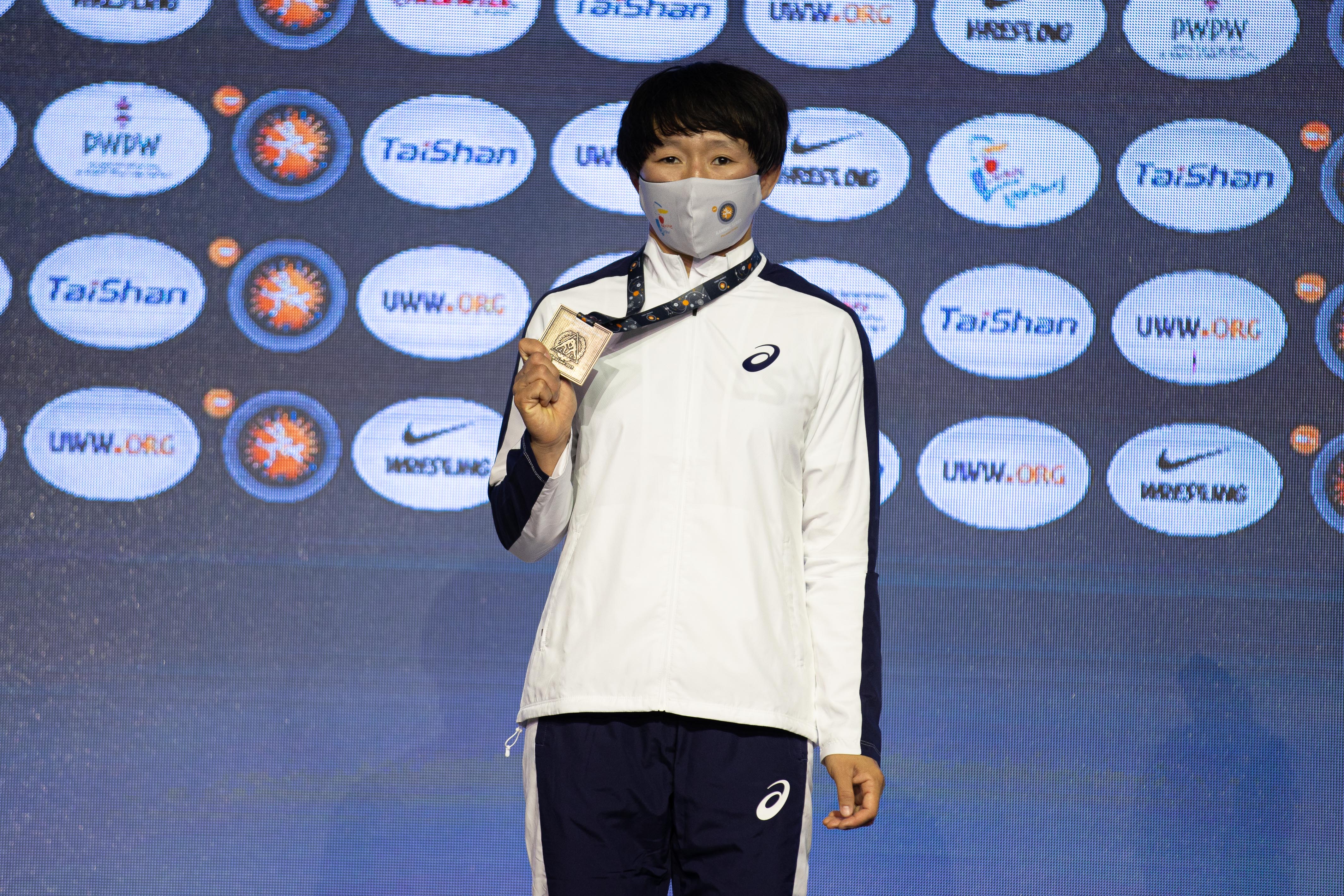 Coming into the Poland Open, the ’19 world champion already amassed a 34-point lead over second-seeded Taybe YUSEIN (BUL). She added 16 Ranking Series points on Thursday – bringing her overall total to 106 points – and will sit in the top spot of the bracket in Tokyo.

Talking about her wrestling on Thursday, the world champion was not particularly happy with how she started the tournament. Against Liubov OVCHAROVA (RUS), she was trailing 2-8 after the first period but rallied to score 12 points and the fall in the second.

“Overall, it was a good day but to be honest my coach is unhappy with me because he set a task for me which I couldn't fully complete,” Tynybekova said. “I was very relaxed in the first bout of the day. I have to work harder on my fitness so that such situation does not arrive in the future.”

The second through fourth seeds at 62kg in Tokyo will be Yusein, Yuliia TKACH OSTAPCHUK (UKR) and Yukako KAWAI (JPN), respectively.

At 55kg, Olga KHOROSHAVTSEVA (RUS) thunderously threw Sumiya ERDENECHIMEG (MGL) and picked up the 90-second fall to win gold. Since early ’20, Khoroshavtseva qualified Russian for the Olympic Games at 53kg, and has won the European C’ships twice, Ivan Yariguin, Russian National C’ships, and Poland Open. She also finished with a bronze medal at the ’20 Individual World Cup.

In the 65kg finals, Henna JOHANSSON (SWE) jabbed her back from a six-point deficit to win her fourth consecutive Ranking Series gold medal. Her finals opponent Anastasiia LAVRENCHUK (UKR) came out firing, double legging Johansson to her rear end for the early four-point advantage. Johansson surrendered another takedown in the first, but just before the period closed, the Tokyo Olympian at 62kg added a freight-train four-point double leg and cut her Ukrainian foes lead to 6-4.

Johansson scored the only two points of the second period and added another Ranking Series title to her resume with the 6-6 win. After finishing with a bronze medal at the ’18 Klippan Lady Open, she’s won Ranking Series golds at the Dan Kolov, City of Sassari Tournament, Yasar Dogu, and now, the Poland Open. 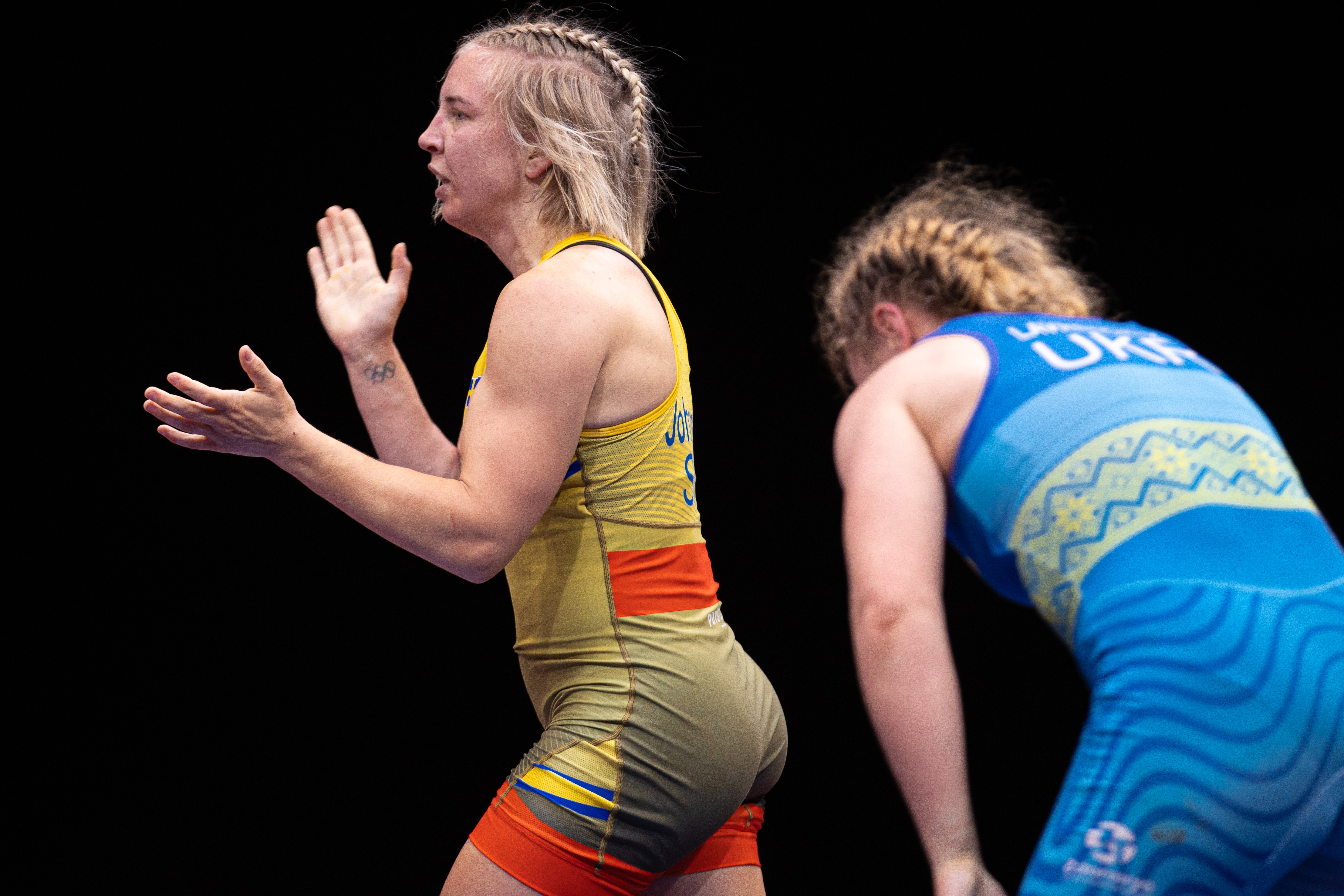